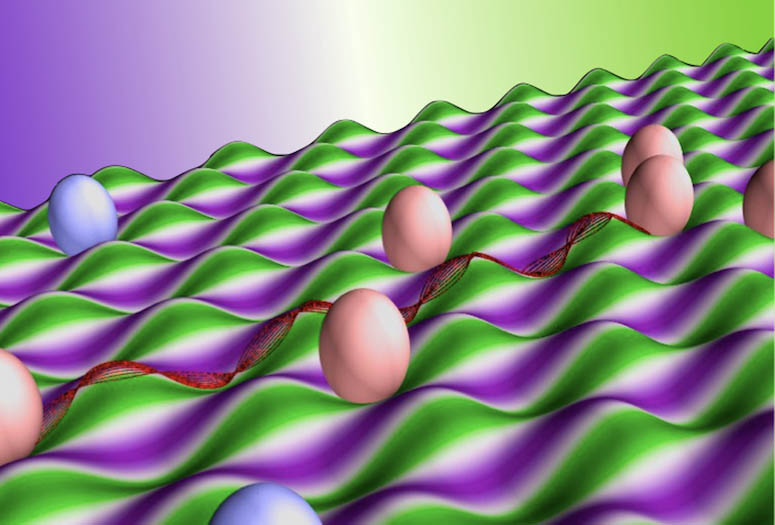 HOUSTON – (March 23, 2022) – Lay some graphene down on a wavy surface, and you’ll get a guide to one possible future of two-dimensional electronics.

Rice University scientists put forth the idea that growing atom-thick graphene on a gently textured surface creates peaks and valleys in the sheets that turn them into “pseudo-electromagnetic” devices.

The channels create their own minute but detectable magnetic fields. According to a study by materials theorist Boris Yakobson, alumnus Henry Yu and research scientist Alex Kutana at Rice’s George R. Brown School of Engineering, these could facilitate nanoscale optical devices like converging lenses or collimators.

Their study appears in the American Chemical Society’s Nano Letters.

They also promise a way to achieve a Hall effect — a voltage difference across the strongly conducting graphene — that could facilitate valleytronics applications that manipulate how electrons are trapped in “valleys” in an electronic band structure.

Valleytronics are related to spintronics, in which a device’s memory bits are defined by an electron’s quantum spin state. But in valleytronics, electrons have degrees of freedom in the multiple momentum states (or valleys) they occupy. These can also be read as bits.

This is all possible because graphene, while it may be one of the strongest known structures, is pliable enough as it adheres to a surface during chemical vapor deposition.

“Substrate sculpting imparts deformation, which in turn alters the material electronic structure and changes its optical response or electric conductivity,” said Yu, now a postdoctoral researcher at Lawrence Livermore National Laboratory. “For sharper substrate features beyond the pliability of the material, one can engineer defect placements in the materials, which creates even more drastic changes in material properties.”

Yakobson compared the process to depositing a sheet of graphene on an egg crate. The bumps in the crate deform the graphene, stressing it in a way that creates an electromagnetic field even without electrical or magnetic input.

“The endless designs of substrate shapes allow for countless optical devices that can be created, making possible 2D electron optics,” Yakobson said. “This technology is a precise and efficient way of transmitting material carriers in 2D electronic devices, compared to traditional methods.”

Yakobson is the Karl F. Hasselmann Professor of Materials Science and NanoEngineering and a professor of chemistry. 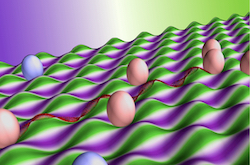 A theory by Rice University researchers suggests growing graphene on a surface that undulates like an egg crate would stress it enough to create a minute electromagnetic field. The phenomenon could be useful for creating 2D electron optics or valleytronics devices. (Credit: Illustration by Henry Yu/Rice University)