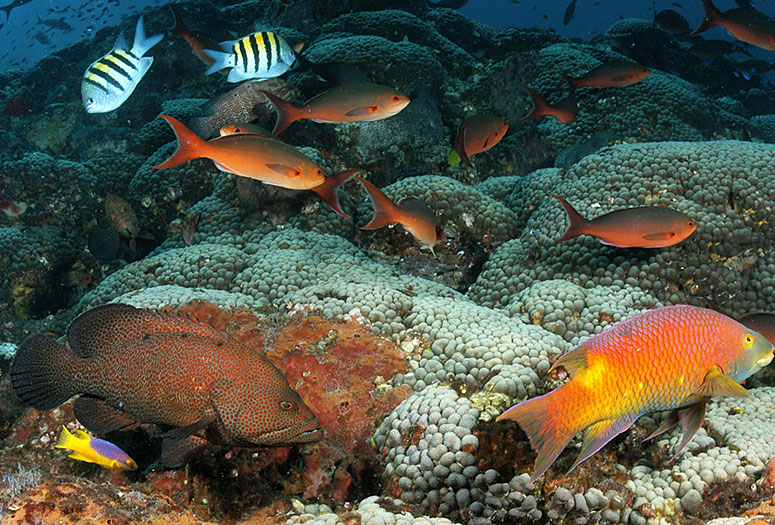 HOUSTON – (Oct. 5, 2022) – Ocean temperatures in the Gulf of Mexico and the Caribbean Sea are on pace to surpass critical thresholds for coral health by mid-century, but rapid action to significantly reduce emissions could slow warming, giving corals and coral conservation programs as much as 20 more years to adapt, according to new research.

Climate scientists and marine biologists from Rice University, the University of Colorado Boulder and Louisiana State University used computer models to simulate climate warming from 2015-2100 under both a “business as usual” scenario with very high emissions and a scenario in which emissions were reduced to high levels. Their study and analysis of ocean warming and ocean acidification levels for specific regions in the Gulf of Mexico and Caribbean under each scenario is published in the Journal of Geophysical Research: Biogeosciences. The researchers found reducing emissions could delay the onset of critically warm ocean temperatures in some areas where reefs are still healthy.

“There are reefs in the Gulf that are really worth saving,” said Rice University marine biologist Adrienne Correa, a co-author of the study. “Some of the healthiest reefs that we still have in the United States are in the areas covered by these projections.”

The study found ocean temperatures in the Caribbean and parts of Florida could reach critically warm temperatures as early as 2050, posing a serious risk for coral survival.

“The fact that we're going to see these changes by 2050 is a strong wake-up call,” said Correa, an assistant professor of biosciences whose lab specializes in studying corals and reef ecosystems. “We get a lot of bad news about reefs, but we can still draw hope and motivation from this. Some of the reefs that are included in this analysis are really special, like the Flower Garden Banks, and reefs off of Cuba and in some other parts of the Caribbean where there's still really high coral cover. We can help protect and keep the high-coral-cover reefs we have if we take immediate action to shift how much energy we use and where we get our energy.”

“In one case, we have more time to mitigate, and in the other we don't,” said Dee, a climate modeling expert and assistant professor of Earth, environmental and planetary science. “People need to be aware this is coming up fast, and the time to explore mitigation techniques is now.”

Corals are symbiotic organisms that live in partnership with photosynthetic algae that help feed their coral hosts. Corals are also builders that draw upon carbonate minerals in seawater to construct their own rocky outer frameworks. Climate warming threatens both coral symbiosis and coral reef-building. For example, heat stress can cause corals to expel their symbiotic algae en masse, a sometimes deadly phenomenon known as bleaching. And oceans become more acidic as they warm, reducing the efficiency of the chemical reactions corals use to build reefs.

Lawman, the corresponding author of the study and a former postdoctoral scholar in Dee’s lab, said the study showed heat-related stress was the biggest and most immediate climate-related threat to corals under each emissions scenario.

“The difference was whether you crossed the critical thresholds around 2050 versus 20 years later,” said Lawman, a postdoctoral associate at the Cooperative Institute for Research in Environmental Sciences at CU Boulder.

The researchers found the key determinant of coral mortality in each scenario was the number of months that corals in the future will be exposed to prolonged temperatures hotter than the hottest average months projected for 2015-2034. The researchers dubbed these “degree heating months.”

“There's always one month that is the hottest of the year,” Lawman said. “Let's say it’s August and the average baseline temperature for that month is 29 degrees Celsius in the region we’re studying. A ‘degree heating month’ in that region is any month in the future that has a higher average temperature than 29 degrees Celsius.”

The research showed that under the "business as usual” emissions scenario, “degree heating months” become the norm in the late 2100s, occurring as much as 10 months out of the year in some parts of the Caribbean.

“That's a huge number of months in which corals could experience thermal stress beyond the usual levels to which they are adapted,” Lawman said.

“These projections are very concerning,” she said. “I think the takeaway message is that the time to act is now.”

DeLong is an associate professor of geography and anthropology at LSU.

The research was funded by the Gulf Research Program of the National Academies of Sciences, Engineering and Medicine, Rice University, the Department of the Interior (G19AC00086) and the National Science Foundation (2102931, 2109622).

“Rates of future climate change in the Gulf of Mexico and the Caribbean Sea: Implications for coral reef ecosystems ” | Journal of Geophysical Research - Biogeosciences | DOI: 10.1029/2022JG006999

https://news-network.rice.edu/news/files/2022/10/1004_CORAL-n1192-lg.jpg
CAPTION: The Flower Garden Banks National Marine Sanctuary about 100 miles offshore from Texas and Louisiana is home to some of the healthiest coral reefs in the United States. (Photo by G.P. Schmahl/NOAA)