From humid east to arid west, Texas is a living lab for Rice study of range limits 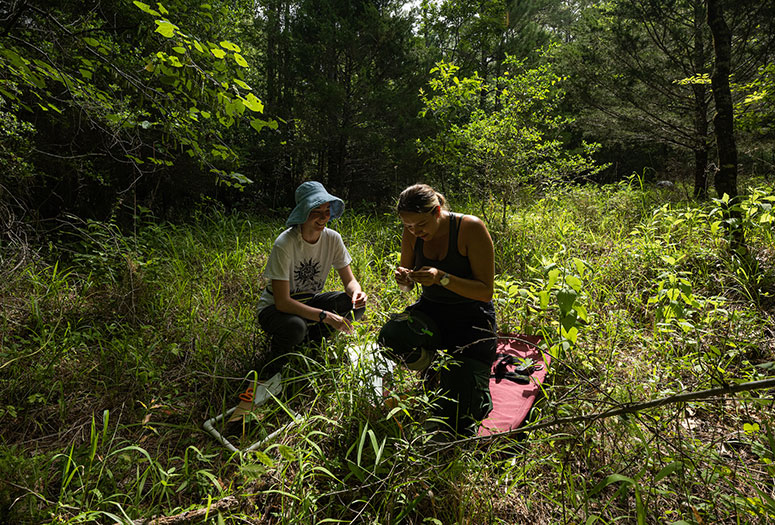 HOUSTON – (Sept. 6, 2022) – As anyone who’s crossed Texas on Interstate 10 can tell you, the Lone Star State is where east meets west. For Rice University biologist Tom Miller, the sharp divide between East Texas’ humid piney woods and West Texas’ parched desert is also a living laboratory where he and his students can learn about boundaries that aren’t found on maps.

“That's one of the sharpest aridity gradients on the planet,” Miller said of the climatic shift from east to west Texas. “And it’s an important boundary for species. A lot of species that occur in eastern North America hit their westernmost limits in Texas.”

Miller, an associate professor of biosciences at Rice, and his research group study range limits, invisible biological dividing lines between where a species can survive and where it can’t. In a world of changing climate, those lines are moving, and Miller and his students want to study and understand how they are moving and why.

Miller’s team studies grasses and other species at eight field sites along a 580-mile stretch of I-10 from lush Lafayette, Louisiana, to sandy Sonora, Texas, about 170 miles west of San Antonio. Thanks to a grant from the National Science Foundation, they’ve begun a first-of-its-kind study to find out whether a strange, ancient marriage between native Texas grasses and their hidden fungal partners could position the plants to better withstand droughts that are expected to be more frequent and severe due to climate change.

“Range limits arise from stress,” Miller said. “As plants go from very wet to very dry places, their drought stress increases. We expect drought stress to be an important limit on how far west a lot of species can make it, particularly eastern species. Because the further west you go, the greater the drought stress.

“The unique thing about this study is that we're trying to understand the role that microbes and microbial symbionts play in determining the range limits of plants,” he said.

The grass species in the study are varieties that thrive in cooler months. Each hosts Epichloë endophytes, symbiotic fungi that live inside the plant. In exchange for living a protected life inside their hosts, the fungi supplies the plants with alkaloid chemicals that previous studies have shown both improve drought tolerance and discourage predation by sickening grass-eating animals.

In their experiments, Miller and his students remove the fungal partner from some grasses and leave it in others. At each field site, partnered and unpartnered plants are grown in plots near one another, and the difference between them reveals the effects of the fungus.

“We’ll plant at all of these places from Louisiana to West Texas, and we’ll compare how important that microbial effect is as the grasses go from east to west and their drought stress increases,” he said. “That's going to allow us to build models that will tell us what role the microbes play in generating range limits and possibly extending range limits.

“That is new,” Miller said. “To my knowledge, this will be the first study to do that.”

Global warming is already raising temperatures in Texas and a 2021 report from the Texas State Climatologist’s office predicts that the number of 100-degree days each summer will nearly double by 2036 compared to the average number of such days from 2001-2020.

Ranges of plants and animals will shift in response, and the wet-dry gradient that has defined Central Texas for centuries may shift as droughts become more frequent and more intense. One might easily imagine drought-tolerant and drought-intolerant plants marching right along with such a shift, followed by all the insects and animals that depend on them. But the real world is far more complex, Miller said. Even slight variations in average rainfall, soil moisture and many other factors can push the balance one way or the other.

“For plants, there’s also the question of whether they can shift to a new range,” he said. “Most rely on either the wind or animals to carry their seeds to new places, and climate change could impact both, making range shifts impossible for some plants.”

Better understanding the beneficial relationship between native Texas grasses and their microbial partners will unlock pieces of the range-shifting puzzle that today are hidden from ecologists, conservation biologists and others who track species ranges, Miller said.

“The ways that climate maps onto geography are already changing and will continue to change,” Miller said. “What do these microbial associations mean for how species will shift in response to climate change? Are microbes going to facilitate expansion into new habitats? Could they potentially inhibit expansion into other habitats?

“Microbial associations are a hidden layer in this large-scale biogeographic problem, and we want to unlock that layer and inform this bigger discussion about how plants and animals in Texas are going to respond to climate change,” Miller said.

Rice University biologist Tom Miller’s research group studies range limits, invisible biological dividing lines between where species can survive and where they can’t. In a world of changing climate, those lines are moving, and Miller and his students are using Texas as a “living laboratory” to better understand those changes. Thanks to a grant from the National Science Foundation, they’re conducting a first-of-its-kind study at eight sites along a 580-mile stretch of I-10 from Lafayette, Louisiana, to Sonora, Texas. The goal is to find out whether a strange, ancient marriage between native Texas grasses and their hidden fungal partners could position the plants to better withstand droughts that are expected to be more frequent and severe due to climate change.

https://news-network.rice.edu/news/files/2022/09/0906_GRASSES-268-lg.jpg
CAPTION: From left, students Joshua Fowler, Ali Campbell and Sar Lindner carry gear they will use at a field site near Huntsville, Texas, to collect samples of native grass species as well as symbiotic fungi that live inside the grass. (Photo by Jeff Fitlow/Rice University)

https://news-network.rice.edu/news/files/2022/09/0906_GRASSES-4p-lg.jpg
CAPTION: From left to right, Rice University graduate student Ali Campbell splits opens grass stem and collects a thin layer of tissue, which will be examined later under a microscope for the presence of symbiotic fungi. (Photo by Jeff Fitlow/Rice University)