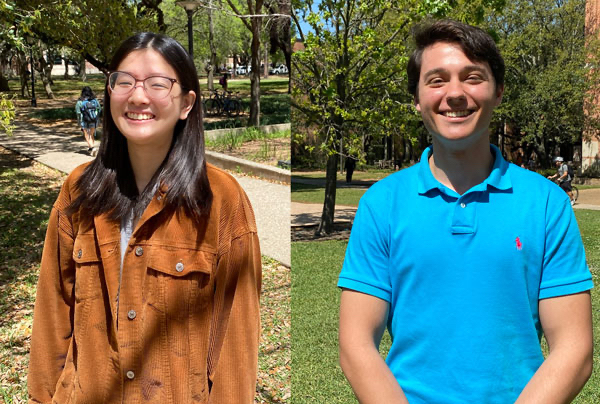 McMurtry College junior Karen Wang and Sid Richardson College junior Joseph Asfouri already had plenty to be proud of thanks to the impressive amount of scientific research under their belts as some of Rice’s top undergraduate researchers.

But thanks to all that groundbreaking work, these two Rice Owls have added a new accolade to their resumes — Wang and Asfouri were both recently awarded Goldwater Scholarships, America’s most prestigious awards for undergraduates studying natural sciences, engineering and mathematics.

Wang, who studies biochemistry, and Asfouri, a neuroscience and electrical engineering double major, both came into Rice knowing they wanted to dive into the school’s ample opportunities for undergraduate research. But neither could have predicted they’d eventually be counted among the ranks of the top undergraduate STEM researchers in the country.

“It still feels a little bit unreal, if I’m being honest,” said Wang, who grew up in Katy, Texas. Wang works in Gloria Echeverria’s lab at the Baylor College of Medicine, studying the ways triple-negative breast cancer cells become resistant to chemotherapy in order to potentially aid the development of more effective therapies down the line.

Asfouri hopes winning a Goldwater is a small way to pay back his mentors over the years. “I wouldn’t be where I am without them,” he said. “This is an award for them, too. It’s not just for me. My experiences are defined by my relationships with them and what I’ve learned from them, so I hope this pays them back a little for the time they invested in me.”

Asfouri, raised in Austin, was attracted to Rice because he knew it would allow him to marry two of his passions, electrical engineering and the mysteries of the human brain.

That interest in neuroengineering led him to the lab of Jacob Robinson in Rice’s BioScience Research Collaborative.

In the Robinson Lab, Asfouri has worked on developing minimally invasive medical therapies by activating cells through thermal magnetogenetics. More recently, he’s been investigating ways in which certain nanoparticles injected into the brain and elsewhere can be heated by magnetic fields to stimulate genetically targeted deep-tissue regions, potentially aiding in the treatment of disorders like Parkinson’s disease, depression and diabetes.

Over 5,000 college sophomores and juniors applied for the latest round of Goldwater Scholarships, and 1,242 of them were ultimately nominated by 433 schools. Out of all those nominees, Wang and Asfouri were among the 417 students chosen by the Barry Goldwater Scholarship and Excellence in Education Foundation’s board of trustees.

When she’s not busy with classwork or research, Wang enjoys dancing with BASYK, Rice’s hip-hop and K-pop student dance group. Asfouri’s non-research activities include being president of the Rice Rowing Club and the founding member of FIRST at Rice, a program that brings together students like Asfouri with pre-college robotics experience to mentor elementary, middle and high school robotics teams at underserved schools in Houston and East Texas.

Wang heard of the Goldwater Scholarship during her senior year of high school at a STEM-focused boarding school in North Texas, but did not give it much thought until last summer, only a few months before the deadline. She thought it was an unattainable goal at first, given it was a highly competitive scholarship, but she ultimately ended up applying after several back-and-forths with supportive mentors and friends.

“At first I was very hesitant and doubtful of myself. I didn’t think I was qualified,” Wang said. “Then I talked to my research mentor about it, and she said, ‘You should totally go for it! What do you have to lose from trying?’”

Like Wang, Asfouri was made aware of the then upcoming application deadline by communications from Rice’s Center for Civic Leadership (CCL), which regularly works with students to help them navigate the intense process of applying for fellowships and scholarships like Goldwater.

Both Asfouri and Wang credited Jessica Khalaf ‘08 — associate director of the CCL — with being an ever-present resource throughout their application process, always making herself available for feedback and advice.

“She’s provided some incredible help with refining my essay, refining my research proposal and crafting my message there,” said Asfouri. “It was a rewarding process, and helped me to refine my focus for what I want to do in the future.”

Wang echoed that sentiment, and praised Khalaf for her calming guidance and constant encouragement throughout the process. Wang also credited a good friend of hers for motivating her to try for the Goldwater — Syed Shams ‘22, a Hanszen College senior, Wang’s physical chemistry classmate and a Goldwater Scholar himself in 2021.

Khalaf called the Goldwater Scholarship “a fantastic opportunity for students who are already engaging in research and want to continue into a career focused on research.”

“Through a holistic approach, we want to ensure that students are identifying opportunities that align with their sense of purpose at Rice and beyond,” Khalaf said. “Regardless of what students end up choosing during and after the fellowship application process, having the opportunity to engage in this critical reflection is the highlight of the work for the CCL.”

Asfouri and Wang both intend to pursue doctorate programs in their respective fields. Wang wants to study in a program at a school in a large city, hopefully with a medical center nearby to help facilitate collaborations between researchers like herself and on-the-ground health practitioners, an environment she’s enjoyed while working at Baylor in the Texas Medical Center.

“It’s a very different atmosphere from researching within the university campus,” she explained. “Yes, you can have collaborators who do work in the medical center, but it’s different when your next-door neighbor is someone who can provide a different but equally important perspective to your research. While I don’t want to be a doctor, I think it’s crucial to communicate with clinicians and patient advocates to understand what patients actually need. Is what we as researchers are doing actually going to benefit the patients down the line?”

In terms of his post-Rice career, Asfouri is inspired by Jennifer Doudna, the pioneering biochemist whose work developing the CRISPR gene-editing platform earned her and co-creator Emmanuelle Charpentier the Nobel Prize. He’s particularly impressed by Doudna’s work leading an initiative of public universities in California to help create an ethical framework for doing genetic research in a socially conscious way, and hopes to follow that example once he earns his Ph.D.

“This is part of why I’m concerned with the social and ethical implications of my research, and creating these technologies for the common good, not just for an elite few to profit off of by taking advantage of people,” Asfouri said.

Wang and Asfouri each had advice for interested Owls who may want to apply for a Goldwater Scholarship down the line. Wang suggests reaching out to resources like the CCL and past Goldwater Scholars within the Rice community. “If you’re in a position where you are doubting whether you are qualified or not, you most likely are,” Wang said. “Even if you don’t end up getting the scholarship, the application process itself is one of the most beneficial experiences you can have: it forces you to reevaluate and articulate your goals, and facilitates building stronger connections with your mentors.”

Asfouri credits getting over the hesitation he felt about reaching out to professors and labs when he first arrived at Rice with eventually putting him on the path to Goldwater.

“It’s less about framing your research experiences with what will look best to an admissions committee or a scholarship committee,” he said, “but it’s finding something you are deeply passionate about, having a diversity of experiences and being courageous enough to reach out with an email.”