Wireless nerve stimulator about the size of a rice grain could treat chronic pain, diseases 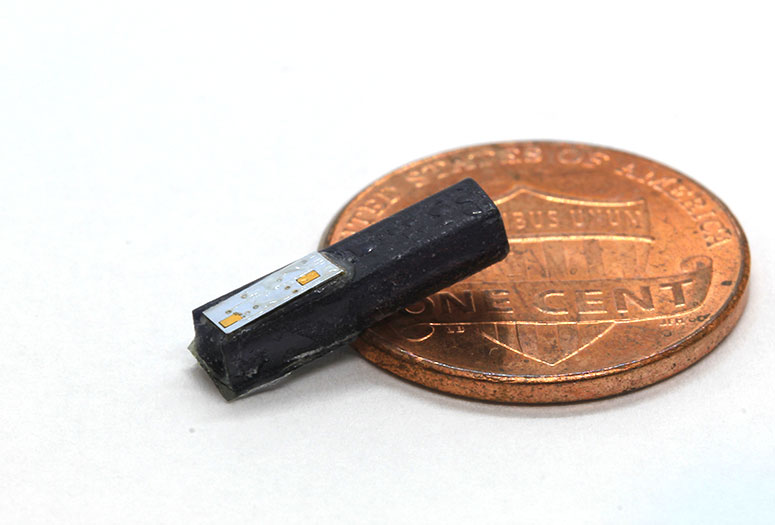 HOUSTON – (March 31, 2022) – An implant little bigger than a grain of rice, put gently in place alongside a strategically placed blood vessel, could replace much bulkier devices that stimulate nerves.

Rice University engineers in collaboration with a host of Texas Medical Center institutions have published the first proof-of-concept results from a yearslong program to develop tiny, wireless devices that can treat neurological diseases or block pain. The nerve stimulators require no batteries and instead draw both their power and programming from a low-powered magnetic transmitter outside the body.

The MagnetoElectric Bio ImplanT -- aka ME-BIT -- is placed surgically and an electrode is fed into a blood vessel toward the nerve targeted for stimulation. Once there, the device can be powered and securely controlled with a near-field transmitter worn close to the body.

The team led by Jacob Robinson and Kaiyuan Yang of the Rice Neuroengineering Initiative and the George R. Brown School of Engineering and Sunil Sheth of the University of Texas Health Science Center’s McGovern Medical School successfully tested its technology on animal models and found it could charge and communicate with implants several centimeters below the skin.

“Because the devices are so small, we can use blood vessels as a highway system to reach targets that are difficult to get to with traditional surgery,” Robinson said. “We’re delivering them using the same catheters you would use for an endovascular procedure, but we would leave the device outside the vessel and place a guidewire into the bloodstream as the stimulating electrode, which could be held in place with a stent.”

The ability to power the implants with magnetoelectric materials eliminates the need for electrical leads through the skin and other tissues. Leads like those often used for pacemakers can cause inflammation, and sometimes need to be replaced. Battery-powered implants can also require additional surgery to replace batteries.

ME-BIT’s wearable charger requires no surgery. The researchers showed it could even be misaligned by several inches and still sufficiently power and communicate with the implant.

The programmable, 0.8-square-millimeter implant incorporates a strip of magnetoelectric film that converts magnetic energy to electrical power. An on-board capacitor can store some of that power, and a “system-on-a-chip” microprocessor translates modulations in the magnetic field into data. The components are held together by a 3D-printed capsule and further encased in epoxy.

The researchers said the magnetic field generated by the transmitter -- about 1 milliTesla -- is easily tolerated by tissues. They estimated the current implant can generate a maximum of 4 milliwatts of power, sufficient for many neural stimulation applications.

“One of the nice things is that all the nerves in our bodies require oxygen and nutrients, so that means there’s a blood vessel within a few hundred microns of all the nerves,” Robinson said. “It’s just a matter of tracing the right blood vessels to reach the targets.

“With a combination of imaging and anatomy, we can be pretty confident about where we place the electrodes,” he said.

The research suggests endovascular bioelectronics like ME-BIT could lead to a wide range of low-risk, highly precise therapies. Having electrodes in the bloodstream could also enable real-time sensing of biochemical, pH and blood-oxygen levels to provide diagnostics or support other medical devices.

Robinson said the team ultimately hopes to employ multiple implants and communicate with them simultaneously. “That way we could have a distributed network at multiple sites,” he said. “Other things we’re looking to add are sensing, recording and back-channel communications so we can use the implants to both record and stimulate activity as part of a closed system.”

Graduate students Joshua Chen and Zhanghao Yu of Rice and Peter Kan , a professor and chairman of the Department of Neurosurgery at the University of Texas Medical Branch at Galveston, are co-lead authors of the paper. Co-authors include graduate students Fatima Alrashdan and C.S. Edwin Lai, lab services specialist Ben Avants and postdoctoral researcher Amanda Singer, all of Rice; Jeffrey Hartgerink , a professor of chemistry and of bioengineering at Rice; UT Medical Branch research scientist Roberto Garcia and research associate Ariadna Robledo; Michelle Felicella, an associate professor of neuropathology, surgical pathology and autopsy at UT Medical Branch; and Scott Crosby of Neuromonitoring Associates.

The National Institutes of Health (U18EB029353, R01DE021798) and the National Science Foundation supported the research.

https://news-network.rice.edu/news/files/2022/03/0404_IMPLANT-Fig-lg.jpg
CAPTION: Rice University’s programmable, nerve-stimulating MagnetoElectric Bio ImplanT, or ME-BIT, measures about 0.8 square millimeters and incorporates a strip of magnetoelectric film that converts magnetic energy to electrical power, a capacitor to store power, and a “system-on-a-chip” microprocessor that translates modulations in the magnetic signal that powers the implant into data that programs the device. (Image courtesy of the Robinson Lab/Rice University)