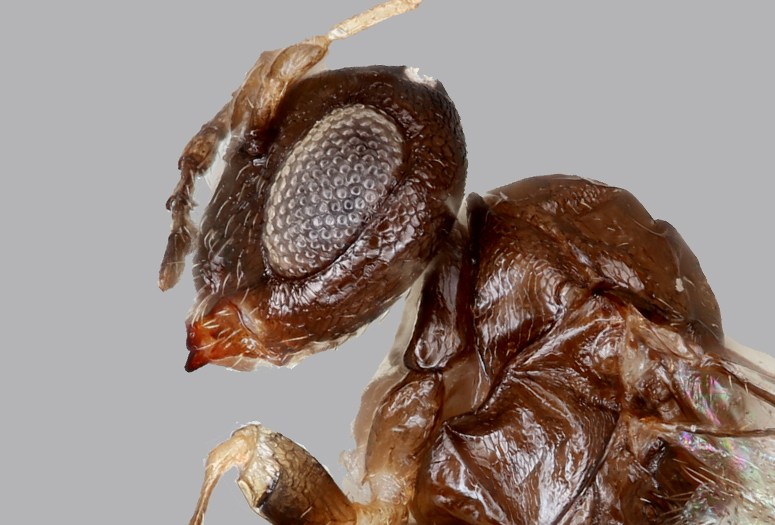 HOUSTON – (Jan. 24, 2022) – Its name sounds legendary, but the newly discovered insect Neuroterus (noo-ROH’-teh-rus) valhalla doesn’t look or act the part. It’s barely a millimeter long and spends 11 months of the year locked in a crypt.

N. valhalla does have the noteworthy distinction of being the first insect species to be described alongside its fully sequenced genome, and the Rice University researchers who discovered it are preparing to see how the tiny, nonstinging wasps may have been impacted by Houston’s historic February 2021 freeze.

N. valhalla is described in a paper published this month in Systematic Entomology. Its name is an homage to where it was discovered: just outside the Rice graduate student pub Valhalla.

“It would have been a missed opportunity to not call it something related to Rice or Valhalla,” said graduate student Pedro Brandão-Dias, lead author of the paper, who first collected N. valhalla from the branches of a massive live oak tree near the campus bar in spring 2018.

Brandão, a Brazilian, had never seen an oak tree before visiting Rice in 2015 for an undergraduate research fellowship in the lab of evolutionary biologist Scott Egan, corresponding author of the study. Brandão returned to Egan’s group in 2018 for graduate school, and though Brandão’s primary research centers on the use of environmental DNA to detect endangered or invasive species, everyone in the lab pitches in each spring to study insects of family Cynipidae. Known as gall wasps, they’re a favorite of Egan’s group because they can be collected from the live oak trees that blanket Rice’s 300-acre campus. In Egan’s eight years at Rice, his lab has discovered at least as many new species of either gall wasps or predators that attack them.

“At Rice, we emphasize learning by doing,” Egan said. “In my lab, undergraduate and graduate students share in the experiential learning process by studying biologically diverse ecosystems on the live oaks right outside our front door. Armed with some patience and a magnifying glass, the discoveries are endless.”

N. valhalla and other gall wasps trick their host tree into feeding and sheltering their young. The wasps lay a biochemical cocktail along with their eggs. The chemicals coax the tree to form a crypt, or gall, around the egg. The gall shelters the egg and feeds larvae that hatch from it.

There are almost 1,000 known species of gall wasps. Some emerge from spherical brown galls that form on the underside of oak leaves. Others form galls inside branches and others on the trees’ flowers, which is where Brandão first collected N. valhalla.

“Once they emerge, they only live three or four days,” Brandão said of the tiny insects. “They don’t eat. Their only purpose is to mate and lay eggs.”

One reason it took almost four years to describe the new species is that N. valhalla — like many other gallers — lays eggs two times a year. Finding where N. valhalla laid its eggs in its alternating generation took a bit of time.

Brandão and labmates first noticed N. valhalla on the big tree outside Valhalla while they were collecting live oak flowers, or catkins, in late February and early March of 2018. They were looking for another species of galler that was known to form galls on the flowers. When DNA tests revealed two species, the researchers took a closer look at their catch and noticed a few smaller insects with lighter colored legs.

“They lay their eggs into the catkins that are developing,” Brandão said of N. valhalla. “They develop in galls on the flowers, and then they emerge. And that happens in March. But the flowers are a one-time thing each year, and by the time they emerge, there are no more flowers for them to lay eggs on. So they have to lay eggs on a different tissue.”

Egan said alternating generations of gallers have often been mistaken for new species in the past. Genomic testing combined with detailed observations in nature was crucial for determining N. valhalla was a unique species. Finding out where the insects went in their alternate generation took both luck and hard work.

Kelly Weinersmith, an adjunct assistant professor of biosciences, and collaborators at the University of Iowa got the lucky break in 2019. Weinersmith sampled galls from a Florida live oak species that differed from the Rice trees where N. valhalla was found. Weinersmith sent samples from the Florida trip to Iowa collaborators Andrew Forbes and Anna Ward, who noticed two distinct kinds of wasps were emerging from cryptic gall swellings at branch junctions. DNA tests showed the unknown wasps were the missing generation of N. valhalla.

“To confirm where they were going after they left the flowers, I performed an experiment where we offered the wasps a bunch of different tissues from the tree and observed them,” Brandão said. The idea was to watch N. valhalla that had just emerged from catkin crypts at Rice and catch them in the act of laying their eggs into a different part of the plant.

With COVID-19 restrictions limiting how many people could be in laboratories on campus in early 2020, a lot of the work fell to Rice undergraduate Camila Vinson, who was living on campus in Brown College.

“We would go out together and collect the catkin galls and tissues for the behavioral tests in petri dishes, but she had to go everyday to the lab to see if any bugs had emerged,” Brandão said. Vinson both cataloged and collected samples of wasps that emerged from the catkins and “did the observation experiment where we’d put the bugs into a petri dish with a bunch of tissues and then watch to see where they go,” Brandão said.

“Because this was during COVID, I took some of them back home and put them in the microscope and took pictures with my phone,” he said.

The team confirmed the petri dish findings by examining trees where they’d previously collected N. valhalla. They found both emergence holes from old crypts and more than a dozen galls that still contained larval N. valhalla.

Brandão said the N. valhalla generation that hatches in live oak catkins goes from eggs to fully formed adults in 2-3 weeks. The cycle takes 11 months for the generation that grows inside branches.

“If they come out at the wrong time, and there's no flowers around, they can't lay their eggs and they just die,” Brandão said. “They have to come out at the exact time the tree's flowering.”

The trees flower at different times from year to year, and it isn’t clear how the wasps coordinate their emergence with flowering. Vinson was the first to pose the question of how N. valhalla might be affected by February 2021’s winter storm, which caused record cold temperatures and delayed live oak flowering across Houston.

“The day the freeze happened I asked Pedro, ‘Is this going to mess up when they come out or their ability to even reproduce?’” she recalled. Brandão circulated the question to an international group of gall wasp researchers. All agreed it was worthy of follow-up. So Vinson decided to tackle it for her senior thesis. She said it’s part of a bigger question about how climate change will affect specialized insects like gall wasps.

“Our gall wasps live on live oaks from the southern United States all the way down through Mexico,” Vinson said. “Those environments are not used to the sorts of temperatures we had last February. And those sorts of freezes are probably going to happen more and more frequently with climate change.

“The big question is, ‘Are these populations going to be in danger, or can they quickly adapt? Do they have strategies that mesh well with a changing climate?’” she said.

https://news-network.rice.edu/news/files/2022/01/0124_VALHALLA-cyc-lg.jpg
CAPTION: Artist’s illustration of the lifecycle of Neuroterus valhalla, a cynipid gall wasp that uses chemicals to induce live oak trees to grow protective crypts, or galls, around its eggs. N. valhalla females (A and D2) lay twice per year in alternating generations at different locations on trees. One generation emerges in February or March, laying eggs in live oak flowers (B) and inducing galls (C1) where adults will emerge in 2-3 weeks. These lay eggs at branching stem nodes (E), inducing galls (F1) from which adults will emerge 11 months later. Ecologists discovered N. valhalla at Rice University, and have yet to find a male member of the species (center). (Illustration courtesy of Barbara Rossi)

https://news-network.rice.edu/news/files/2022/01/0124_VALHALLA-pbcv41-lg.jpg
CAPTION: Pedro Brandão-Dias (left) and Camila Vinson outside the door to Valhalla with a photo of the nonstinging wasp species they discovered nearby. Neuroterus valhalla, which is just 1 millimeter long, was named for the Rice graduate student pub because it was discovered in a tree just outside. (Photo by Jeff Fitlow/Rice University)