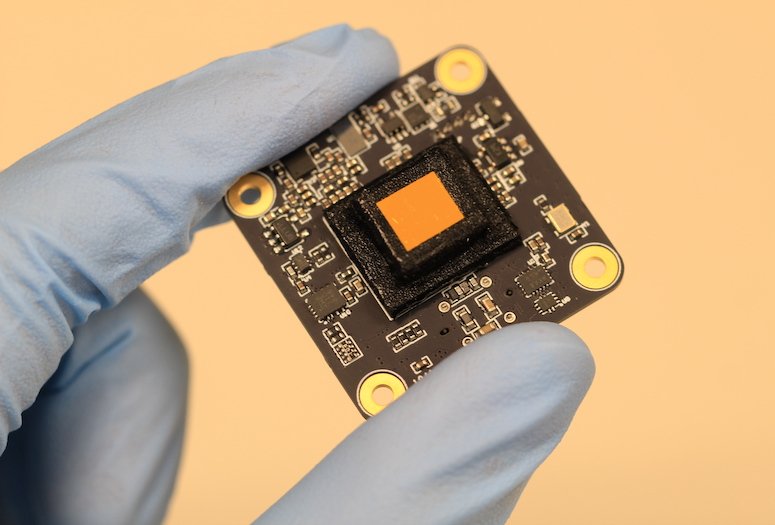 Then attach Bio-FlatScope, the latest iteration of lensless microscopy being developed at Rice University.

That particular use is fanciful but not far-fetched, according to Jacob Robinson , an electrical and computer engineer at Rice’s George R. Brown School of Engineering who led the recent effort to test Bio-FlatScope in living creatures.

The research team’s FlatCam , a lensless device that channels light through a mask and directly onto a camera sensor, aimed primarily outward at the world at large. The raw images looked like static, but a custom algorithm used the data they contained to reconstruct what the camera saw.

The new device looks inward to image micron-scale targets like cells and blood vessels inside the body, even through the skin. Bio-FlatScope captures images that no lensed camera can see — showing, for example, dynamic changes in the fluorescent-tagged neurons in running mice.

One advantage over other microscopes is that light captured by Bio-FlatScope can be refocused after the fact to reveal 3D details. And without lenses, the scope’s field of view is the size of the sensor (at close range to the target) or wider, without distortion.

A small, low-cost Bio-FlatScope could eventually look for signs of cancer or sepsis or become a valuable tool for endoscopy, said Robinson, who teamed with colleagues at Rice’s Neuroengineering Initiative on the project.

The team’s proof-of-concept study also imaged plants, hydra and even, to a limited degree, a human. Their results appear in Nature Biomedical Engineering .

The mechanism combines a sophisticated phase mask to generate patterns of light that fall directly onto the chip, according to the researchers. The mask in the original FlatCam looks something like a bar code and limits the amount of light that passes through to the camera sensor. But it doesn’t work well for biological samples.

The Bio-FlatScope phase mask looks more like the random map of a natural landscape, with no straight lines. “We had to start from scratch and think about how to make it function in a realistic biological setting,” Robinson said.

“Being random allows the mask to be pretty diverse in gathering light from all directions,” said postdoctoral researcher Vivek Boominathan, one of four lead authors on the study. “And then we take the random input, which is called Perlin noise, and do some processing to get these high-contrast contours.”

At the sensor, light that comes through the mask appears as a point spread function , a pair of blurry blobs that seems useless but is actually key to acquiring details about objects below the diffraction limit that are too small for many microscopes to see. The blobs’ size, shape and distance from each other indicate how far the subject is from the focal plane. Software reinterprets the data into an image that can be refocused at will.

A tiger was a little beyond their budget, so the researchers started small, first capturing cellular structures in a lily of the valley , then calcium activity in tiny, jellyfishlike hydra. They moved on to monitoring a running rodent, attaching the Bio-FlatScope to a rodent’s skull and setting it down on a wheel. The data showed fluorescent-tagged neurons in a region of the animal’s brain, connecting activity in the motor cortex with motion and resolving blood vessels as small as 10 microns in diameter.

In collaboration with Rebecca Richards-Kortum and research scientist Jennifer Carns from Rice Bioengineering, the team identified vascular imaging as a potential clinical application of the Bio-FlatScope. Graduate student and co-lead author Jimin Wu offered her lower lip to see if light passing through to the camera could deliver structural details of the blood vessels within.

“It was kind of an engineering challenge because it’s difficult to position the Bio-FlatScope at the correct position and keep it there,” Wu said. “But it showed us it could be a good tool for seeing signs of sepsis, because pre-sepsis changes the density of the vasculature. Cancer also alters the morphology of the microvasculature.”

“We can imagine it would be hard to stick a microscope in that position, but maybe a little clip you put on your lip would be able to look for things like sepsis or tumors in the oral mucosa,” Robinson said.

Long term, the team sees potential for a camera that could curve around its subject, like brain tissue, “so it could match the morphology of what you’re looking at,” Robinson said. “Or maybe you could fold it up, stick it in place and have it unfold and deploy.

“You could also do really interesting things by bending it for a fisheye effect, or you could curve it inward and have very high light-collection efficiency,” he said.

https://youtu.be/E81XAib6udI
Video captured by Rice University’s Bio-FlatScope shows activation in the brain of a running mouse of fluorescent-tagged calcium indicators, left, as compared to a heat map of the same region at right. The camera captures biological activity that can’t be acquired by conventional instruments. (Credit: Robinson Lab/Rice University)

https://news-network.rice.edu/news/files/2022/02/0228_LENSLESS-1-WEB.jpg
A comparison of images from Rice University’s Bio-FlatScope, left, and original FlatScope, right, show how much detail the new device captures in images of cells in a lily of the valley. Bio-FlatScope’s random phase mask proved better at imaging curved structures. (Credit: Robinson Lab/Rice University)

https://news-network.rice.edu/news/files/2022/02/0228_LENSLESS-2-WEB.jpg
The lensless Bio-FlatScope is a small, inexpensive camera to monitor biological activity that can’t be captured by conventional instruments. The device could eventually be used to look for signs of cancer or sepsis or become a valuable endoscopy tool. (Credit: Robinson Lab/Rice University)