'We are here for just one little thing: to change reality itself.' 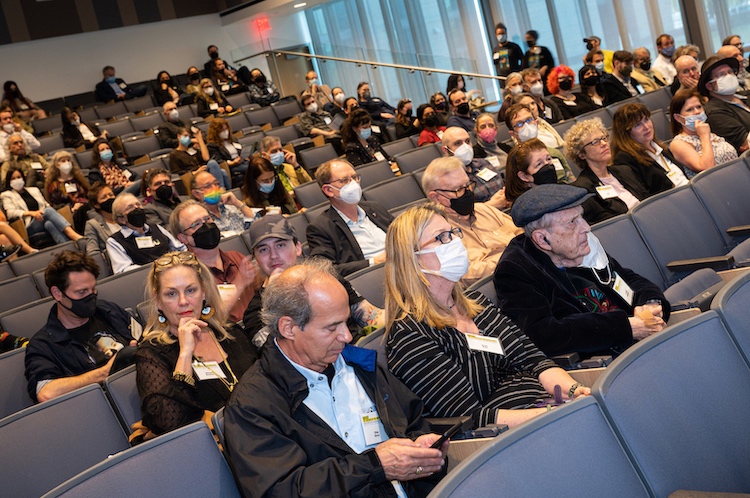 Over the course of nearly four days, Rice’s Department of Religion hosted an international conference that Dean of Humanities Kathleen Canning estimated during her welcoming remarks was “the largest, most ambitious and most transgressive in its engagement with these authors and Archives of the Impossible that our school has probably ever hosted.”

“This has outgrown and overtaken the usual dimensions of academic conferences,” Canning said. “And this is a tribute to the power of the humanities to engage questions far beyond the traditional confines of the humanities.”

“Opening the Archives of the Impossible” took place March 3-6 in the Hudspeth Auditorium at Rice’s Glasscock School for Continuing Studies, where scholars and researchers from across the world convened for panel discussions, plenary sessions and a tour of the archives themselves: a treasure trove of documents located in Fondren Library’s Woodson Research Center that were donated by the world’s most well-known researchers of the paranormal.

Those same researchers also presented at the conference, including French-American ufologist Jacques Vallée, bestselling author Whitley Strieber, remote viewing specialist Edwin May and Leslie Kean, the investigative journalist known for her breaking coverage of the Pentagon’s UFO unit in the New York Times.

“We are here for just one little thing: to change reality itself,” said Jeffrey Kripal, the J. Newton Rayzor Chair in Philosophy and Religious Thought in the Department of Religion, who organized the conference.

“It is OK to mourn the loss of certainty or the end of a world view; it is also OK to laugh at the same,” Kripal said during his opening address to panelists and attendees alike. “It is also OK to be provoked or puzzled or just confused. Indeed, if you are not confused over the next few days, you are probably not listening.”

In between plenary sessions, conference attendees connected with each other over lunch and dinner breaks in the Dean’s Commons of the Glasscock School and attended panels on the intersection of the paranormal or “impossible” with science, the academy and the public sphere.

A panel on “experiencing the impossible” even featured speakers sharing their own firsthand experiences with such “impossible” phenomena as near-death encounters, precognition and U.S. government-sponsored remote viewing programs.

Each panel drew dozens of different questions from the large in-person crowd, while over 1,500 viewers across the globe tuned into the conference’s sessions online.

On Friday evening, “Communion: A True Story” author Strieber took the stage for a plenary session. The 1987 bestseller recounted Strieber’s encounter with “grey aliens.” The book’s cover art, rendered in police sketch artist detail, is now one of the most iconic images of aliens in modern culture: a large, hairless head with enormous black eyes that tilt into a small, slitted nose.

Following the book’s publication, Strieber was inundated with hand-written letters from readers who shared similar encounters with similarly strange-featured beings. He and his wife Anne spent years reading and cataloging these thousands of these letters.

“What happened early on was that we realized that the narrative emerging from the letters went beyond the apparent abduction that I had experienced; it was in fact uniquely strange and entirely unknown,” Strieber said.

“It wasn't present in the UFO literature at all for the most part. It did not follow the narrative that had been published at all. And these letters, one of the things that makes them so precious is that they're from before the internet, when people had many fewer inputs to draw on — and you can read them one after another. I've read about 200 of them this week,” he said.

Those letters now reside among the many other captivating materials in the Archives of the Impossible at Rice, a tangible product of the years that Kripal, his graduate students in the Department of Religion and the Woodson Research Center archivists have spent in pursuit of protecting and promoting this research. Contained together in one place, the archives also represent the untold connections and revelations that may now be made.

“I do recall when Jeff phoned me and asked me for the letters, for I thought to myself, ‘My God, that's impossible,’” Strieber said. “I couldn't believe anyone wanted them … they've been sitting in a storage space for nearly 25 years.”

“When I walked in (the Woodson) a few days ago, and saw what they had done with those letters, my heart opened with gratitude,” he said. “It meant so much to me. Thank you to Rice University for opening its mind and heart to the impossible.”