Library staff worked throughout pandemic to deliver invaluable documents, digitization and much more 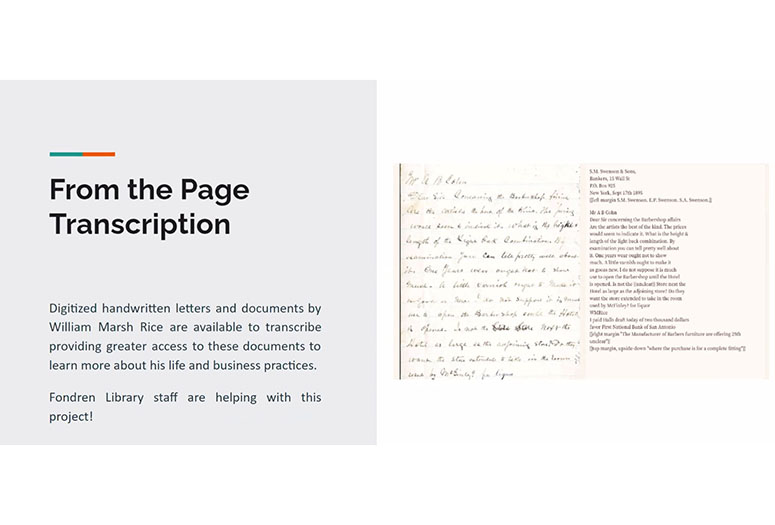 Reflecting the highly collaborative nature of their work, all 10 team members in the Woodson Research Center were honored this year with the 2021 Shapiro Library Staff Innovation Award. This marks the first time in its history that the award, which typically recognizes the exemplary efforts of a member of the Fondren Library staff, has gone to a group.

Award winners Amanda Focke, Rebecca Russell, Norie Guthrie, Dara Flinn, Traci Patterson, Gabby Parker, Portia Hopkins, William Jones, Steven Loyd and Sylvia Podwika all gathered via Zoom for the virtual ceremony July 22 — many of them from their respective offices inside the Woodson itself.

The award comes from an endowed fund created by the estate of former University Librarian Beth Shapiro, who created the User Services division and greatly encouraged investment in electronic resources and other innovative technologies during her years of service. Shapiro also encouraged teamwork among her staff, said University Librarian Sara Lowman, who said Shapiro would have been greatly pleased with this first-ever group award.

In addition to maintaining important university records, a large collection of rare books and such vital community resources as the Houston Jewish History Archive and the Houston Folk Music Archive, the staff of the Woodson Research Center have been instrumental in providing invaluable resources to Rice’s Task Force on Slavery, Segregation and Racial Injustice over the last year.

Take, for instance, 19th-century business ledgers that belonged to Rice’s founder, William March Rice. Handwritten in faded ink on delicate pages, the ledgers had never been digitized until the Woodson team took on the task. All those handwritten entries became searchable text, as did the Rice Family Papers, a collection owned by Houston’s Heritage Society and digitized as part of a collaboration between the two institutions.

These materials were utilized by the Task Force as it researched William Marsh Rice’s life and business practices, as were other university documents pulled from the archives: evidence of an active Ku Klux Klan presence on campus in the 1920s, early brochures from Rice’s Black Student Union (later the Black Student Association) in the 1970s, a landmark report on the state of Black life at Rice from 1990s.

All of this work was vital to the Task Force, created in June 2019 to investigate Rice's past with respect to slavery, segregation and racial injustice. Amanda Focke, head of special collections, was among those Woodson staff who frequently joined Task Force co-chairs and history professors Caleb McDaniel and Alexander Byrd ’90 as they shared this research via weekly “Doc Talks” webinars (all 23 of which have also been digitized by the Woodson).

Last month, the Task Force issued two long-awaited reports to the Rice community. One shared the significant connections found between slavery in Texas and Rice’s earliest founding figures, including William Marsh Rice. The second shared recommendations on what should be done with the founder’s memorial, at the heart of Rice’s campus in the Academic Quadrangle.

Jan West ’73, one of the Black Student Union’s original founders, now serves as Rice’s assistant director of multicultural community relations as well as a member of the Task Force. West and McDaniel were among many who nominated the Woodson team from outside Fondren itself, highlighting the impact of its work.

It’s work that has “put the Woodson on the map,” wrote McDaniel, whose course on Rice, Slavery and Segregation was accomplished in collaboration with the Woodson Research Center, and work that demonstrates the staff’s indispensable role as both archivists and educators.

Taking advantage of the online nature of the awards ceremony, archivist and special collections librarian Rebecca Russell shared a presentation featuring photos of the work she and her colleagues at the Woodson performed over the last year.

Much of it was creatively adapted to work around pandemic restrictions, such as their virtual presentations to Rice classes that incorporated library carts and stacks of filing boxes to transport a camera and laptop into the archives. Still more of the team’s work contributed to another Task Force initiative: the Racial Geography Project, an interdisciplinary research collective through the Department of Art History that’s currently investigating histories of racism and racialization on the Rice campus.

Being able to recognize the Woodson team for its many contributions to the Rice community at large — accomplished during a protracted pandemic and invaluable to so many — was “one of the highlights of the year,” Lowman said.