Rice theory shows potential to synthesize material on an insulator 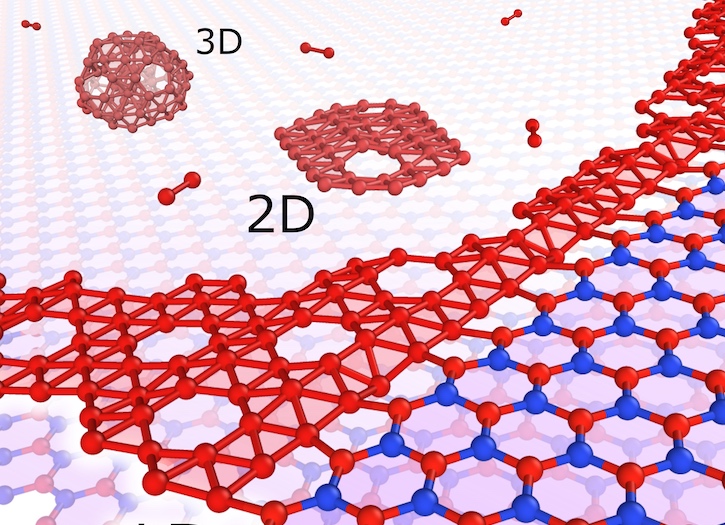 HOUSTON – (Nov. 12, 2021) – Borophene may be done tantalizing materials scientists and start serving their ambitions, if a new approach by Rice University researchers can be turned into practice.

Materials theorist Boris Yakobson of Rice’s George R. Brown School of Engineering and his group suggest a method to synthesize borophene, the 2D version of boron, in a way that could make it easier to free up or manipulate.

According to the group’s paper in the American Chemical Society journal ACS Nano, that would involve growing the exotic material on hexagonal boron nitride (hBN), an insulator, rather than the more traditional metallic surfaces typically used in molecular beam epitaxy (MBE).

The weaker van der Waals forces between the growing borophene and relatively chemically inert hBN would make it easier to remove the material from the substrate to use in applications. It would also allow for simpler direct evaluation of borophene (without lifting it from the substrate) for its plasmonic and photonic -- that is, light-handling -- properties because there would be no metallic substrate to interfere. That would also aid experimentation on its electronic properties, which could be of interest to those who study superconductivity.

Because hBN, like graphene, has a chicken wire-like hexagonal lattice, its atomic arrangement also allowed for edge-epitaxial growth of the new crystal forming on its surface. In epitaxy, growth of the new material is dictated to a degree by the lattice below. In this case, that growth happens instead on the plateau’s raised side.

In particular, the precise ab initio calculations showed that boron atoms have a “high affinity” to the hBN steps and their zigzag edges, bypassing the barrier to nucleation presented by any other locations on the substrate. That allows growth of the crystal to begin on a solid footing.

“Steps on a surface are one-dimensional entities and boron’s affinity to steps enables 1D nucleation, which is known to possess no thermodynamic barrier,” Bets said. “This is an icebreaker, as nucleation occurs almost barrier-less and then extends into the desired 2D borophene.”

Ruan noted that after scrutinizing the idea from a physical chemistry standpoint, the hard part began. “The most laborious part was to present all of the quantitative values and arguments with the highest precision,” he said. “For our large structures, that involves using rather expensive and time-consuming computational methods.”

The growth mechanism suggested the researchers also have a look at popular graphene as a substrate. Their calculations showed graphene’s inherent lattice energy would trap boron atoms or dimers on the surface and prevent them from nucleating borophene.

Yakobson has a solid history of predicting what boron atoms could do, and then watching labs successfully take up the challenge. He hopes for no less with the latest theory.

“The process looks very logical and this way seems convincing, and we do hope that experimentalists worldwide will give it a try, as indeed happened with our earlier proposition of synthesis on metals,” he said. “We are optimistic but keeping our fingers crossed. Serendipity in the lab usually implies a happy outcome, but also a surprise, possibly an obstacle not expected or desired.”

Yakobson is the Karl F. Hasselmann Professor of Materials Science and NanoEngineering and a professor of chemistry at Rice. The U.S. Department of Energy, Basic Energy Sciences (DE-SC0012547) and the Robert Welch Foundation (C-1590) supported the research. 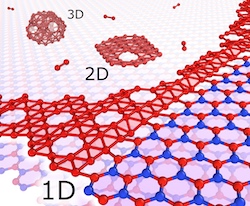 A study by Rice University materials scientists shows it may be possible to grow borophene -- 2D boron -- in a way that allows for easy separation from a substrate. They calculated that borophene grown on hexagonal boron nitride allows for nucleation of borophene along the edges of steps in the substrate. (Credit: Ksenia Bets/Yakobson Research Group)