The Way I See It: How Rice University became the training ground for two future Navy officers 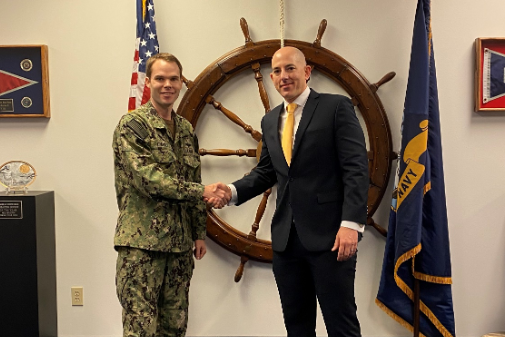 It was March 6, 2018, when I got the news. I had been on travel in the Middle East when I learned of my acceptance into Rice University's Master of Global Affairs (MGA) program. Staring at the illuminated minarets around me that night, I knew the future was bright.

As the son of a former Navy man, I was taught that serving others held the greatest degree of virtue. Whether it was for God or country, I knew that serving would set me up for success in life. Getting accepted into the MGA program created the perfect opportunity and signaled to me that a career in public service was on the horizon.

To set the tone on our very first day at Rice, my fellow MGA students and I were introduced to Bill Barnett, former director at McKinsey & Co. He spoke to us about the creation of the Personal Value Proposition, the process that would help us think strategically about our career paths. This required us to think deeply about life after Rice, carefully dissecting our "wants" versus the "needs" of a prospective employer. We were paired with classmates to critique each other’s propositions, and Anne-Marie Prochaska's was eerily similar to mine. We were both dedicated to public service, both wanted to work in Washington, D.C., and both displayed an unwavering love for country.

The value proposition exercise was just one example of how the MGA program helped us reach our potential. It introduced us to the very best, from world-renowned scholars and professors to historical statesmen and speakers. Our class celebrated the 25th anniversary of the Baker Institute for Public Policy with a special guest of honor, former President Barack Obama. We had the opportunity to meet former Secretary of State James Baker, the namesake of the institute. We were taught by the director of the Baker Institute, former U.S. ambassador to Israel and Syria Edward Djerejian. In addition, there was instruction from MGA program director Mark Jones as well as a collection of leading experts in their respective fields. To say we had more than one example to emulate would be an understatement.

After graduation most of us had lost touch, setting our sights on our careers. The global "pause button" that was the COVID-19 pandemic forced us to take a hard look into the future. Job applications were submitted, but I was looking for something more — something I could look back on one day and be proud of.

During the summer of 2020, I sought out various branches of service to inquire about joining the military. The most appealing was the Direct Commission Officer (DCO) program through the Navy Reserve. It made the most sense, allowing me to pursue a career while serving at the same time. I soon recognized that the DCO program was actually one of the most competitive routes to becoming a military officer. In fact, a few notable political figures had come through the same program — guys like Texas Land Commissioner George P. Bush, U.S. Rep. Jimmy Panetta (son of former Secretary of Defense Leon Panetta) and Secretary of Transportation Pete Buttigieg. I decided that if I was going to do something special, this was it.

I worked with a Navy recruiter for months, gathering all the required items for a competitive package. My personal value proposition from Rice two years earlier prepared me well for this moment. I knew I had what the Navy was looking for. I submitted my application in November 2020, but it would be six months before any decision would be rendered. Nonetheless, I stayed busy and continued with life.

May 2021 — decision time — had finally come, but I still had no updates from my recruiter. I resorted to an online public forum to get the scoop on all things Navy. To my surprise, there were other candidates from the same DCO board scouting for information as well.

Halfway into the month, I decided to check the latest forum post, as I knew results were imminent. I was hoping to find out if anyone had heard anything from their recruiter. Instead, I got more than I was looking for. To my astonishment, someone had provided screenshots of what appeared to be a list of names indicating the DCO board’s decision. Curiously, I scanned the list, with eyes wide open. My thoughts raced after every name that passed by and then my name beamed back at me. I was on the list! Still in disbelief, I read the rest of the list. As I approached the end, I couldn’t believe my eyes, yet again! My classmate from the MGA program at Rice, Anne-Marie Prochaska, was also on the list!

Still having a hard time believing this revelation, I waited for official word from my recruiter and avoided reaching out to Anne-Marie, because I wasn’t sure if what I saw was really true. Later the next day, I received a text message from Anne-Marie. It read, “Jamal! I have news! It’s about the Navy!” I hadn’t spoken to her since graduation, and neither of us knew of the other person’s plans to apply to the military, let alone the same program from the same branch of service. I immediately called her and discovered that she, too, found out from the same online public forum! We congratulated each other and expressed our happiness for the other’s success, our minds still spinning over what had just happened.

A day later, we both got final confirmation from our respective recruiters on being selected. We commissioned out of Houston this summer and also, quite coincidentally, received full-time job offers to work in the Washington, D.C., area.  It was an amazing twist of fate for two MGA students looking to make a difference by serving their country. The way I see it, Rice, in many ways, was the perfect training ground to become Navy officers. It was certainly a moment neither I, nor my friend Anne-Marie, will ever forget.