Rice students design low-cost monitor for pandemic and beyond 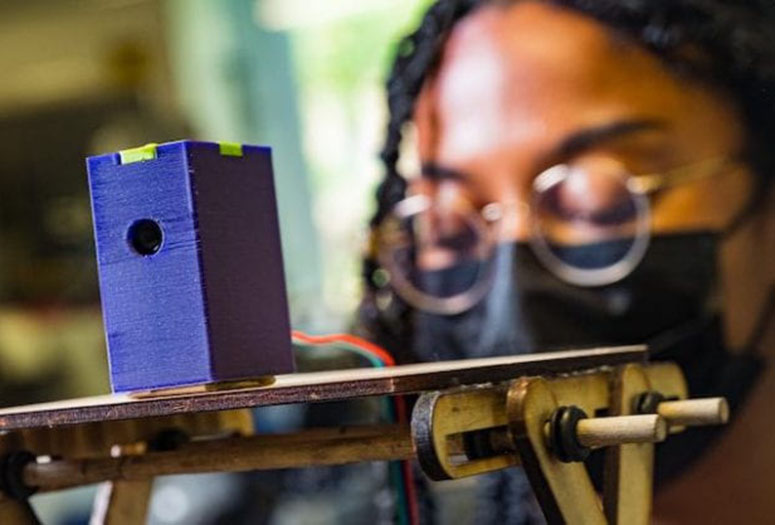 Getting around during the pandemic often requires getting your temperature taken to check for COVID-19. A team of seniors at Rice’s Brown School of Engineering wants to make that practice more practical for facilities around the world.

The low-cost temperature-at-a-distance device designed at Rice’s Oshman Engineering Design Kitchen uses infrared (IR) light to read a user’s forehead without contact and give instant feedback on an LED readout. The simple device costs about $75 to produce now, but the team is working to design a production model that will cost about $40.

The team calling itself “Hot Mess” will demonstrate the device during this year’s Engineering Design Showcase, an annual event with cash prizes for the top teams. The showcase will be virtual this year, beginning at 4:30 p.m. April 29.

“Fever is such a big symptom for a lot of airborne diseases that we figured we could make something that would be applicable now, but also for other diseases and pandemics in the future,” said team member Caterina Grasso Goebel. “A lot of people use IR guns that don’t create enough distance between the person taking the screening and the person being screened.”

Of course, “simple devices” are never as simple as they seem. The students -- bioengineering majors Grasso Goebel, Keaton Blazer and Diego Gonzalez, cognitive science major Kyla Barnwell, psychology major Sanjana Krishnan and sports medicine and exercise science major Michael Ngan -- had to design and build not only the circuitry and software to deliver a result but also the mechanism that would allow users to set the sensor at the right height and trigger the reading from a short distance.

That involved rigging a scissor-lift mechanism that can be raised and lowered with dowels manipulated by foot. The sensor on their prototype can be raised to 5 feet, 11 inches, or lowered to 4'2". “Our No. 1 goal for the next couple weeks is making sure it’s user-friendly enough,” Barnwell said, noting they hope to develop a shorter prototype for children or those using wheelchairs as well.

The ability to gang multiple sensors offers the opportunity to put them at various heights in an existing structure like a doorway, said Blazer, who focused on the electronics.

“All of the IR sensors out there basically do the same thing,” he said. “So one goal was to configure everything with a really low cost and adequate accuracy for the environment. We built our circuitry to process the data properly to account for ambient temperatures and all the rest.”

Working with the Rice 360˚ Institute for Global Health, the device incorporates components the members expect will be available in low-resource settings to make repairs more practical. Barnwell, who spent the summer of 2019 in Malawi with Rice 360˚, got a sense of what is available by scouring local stores there.

“I also got to see the environments where a lot of these technologies will be implemented,” said Barnwell, who visited marketplaces, hospitals and other locations where a temperature sensor would be most useful.

The team’s faculty advisers are Andrea Gobin, director of invention education at Rice 360˚, and Gary Woods, a professor in the practice of electrical and computer engineering, with additional mentoring by graduate student Rushika Mitbander.