Study shows why anesthetic stops cell’s walkers in their tracks 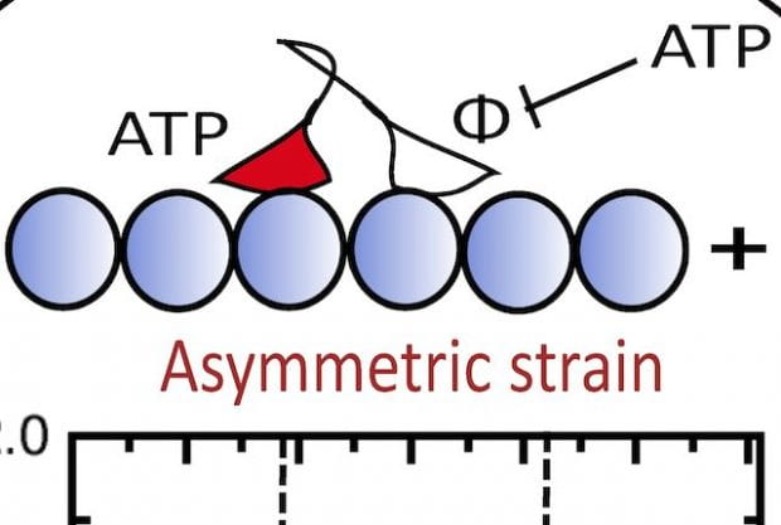 like a wrench that gums up the gears, a common anesthetic keeps the motor proteins in your cells from making their rounds.

This is not necessarily a bad thing, but how it works has been a mystery until now.

Researchers at Rice’s Center for Theoretical Biological Physics (CTBP) detail the mechanism that allows propofol -- the general anesthetic injected to knock you out before surgery -- to halt the movement of kinesin proteins that deliver cargoes along microtubules to the far reaches of cells.

The drug’s effect on kinesin was known, said Rice physicist and CTBP co-director José Onuchic, but the mechanism was not. Computational simulations of the protein in the presence of propofol clearly show where it binds to kinesin and how that disrupts kinesin’s function.

“A lot of things in the cell are regulated by microtubules and motor proteins, including mitosis and the trafficking of organelles and vesicles, so any insight into how they work is important,” said Onuchic, who led the study with former Rice postdoctoral researcher Biman Jana, now an associate professor of chemical sciences at the Indian Association for the Cultivation of Science, Jadavpur, and Susan Gilbert, a professor of biological sciences at Rensselaer Polytechnic Institute.

Understanding the mechanism suggests those same binding pockets could be used in other therapies, Jana suggested. “This study opens up immense possibilities for therapeutics in kinesin motor protein-related disease,” he said.

“As we now know with better confidence about the important regions of kinesin, we can look for more small-molecule binders in those regions,” Jana said. “It will help to discover better anesthetic agents and also treat several diseases related to kinesin.”

The research appears in the Proceedings of the National Academy of Sciences.

Researchers know propofol affects many proteins in the body as it induces anesthesia, and they suspect kinesin inhibition may contribute to the anesthetic’s effects on memory and consciousness.

Kinesins were first observed in squid in 1985, but now there are 45 known kinesins in humans, 38 of them in the brain and as many as 20 that regulate transport in cells. These literally take about 100 steps along the microtubules. Their protein heads (which function as feet) are powered by the chemical energy from ATP that, when it binds to the leading head, powers the trailing head forward. As the trailing head advances, it becomes the leading head, releases ADP and grabs the microtubule.

When both heads are on the microtubule, a normal stage in the walking cycle, it is important that ATP does not remain bound to the leading head, Onuchic said. If this happens, ATP can be hydrolyzed in both heads, prompting the kinesin to be released from the microtubule, stopping its motion. Propofol binding shortens this “run length” by up to 60%.

“Like us, they always have to have at least one foot on the ground,” Onuchic said. “When both heads unbind, that disrupts the process.”

The simulations showed propofol molecules interfere by binding to the leading head in one of two places, either near the neck linker that regulates communication between the walking heads or to a site near where it binds to the microtubule. This weakens its grip and the strain on the neck linker, prompting the leading head to bind ATP while both heads are bound to the microtubule. ATP bound to both heads may cause hydrolysis of both, followed by the kinesin's release.

The researchers found in their simulations that propofol had no direct effect on kinesin’s normal operation upon binding to the trailing head. They also traded the model of propofol to fropofol, a derivative molecule with a fluoride in place of a hydroxyl group, and found it did not affect kinesin function, suggesting the significance of the hydrogen bond in propofol.

“From our previous experience in working with kinesin related to neurodegenerative diseases, we knew about the important regions and interactions of kinesin for its reliable functionality,” Jana said. “However, finding propofol binding pockets in exactly the same regions was a pleasant surprise as it strengthened our propositions.”

Mandira Dutta, an alumnus of the Indian Association for the Cultivation of Science and now a postdoctoral scholar at the University of Chicago, is lead author of the paper. Onuchic is the Harry C. and Olga K. Wiess Professor of Physics and Astronomy and a professor of chemistry and of biosciences.

Researchers simulated the mechanism that allows propofol, a common anesthetic, to halt the movement of kinesin proteins that deliver cargoes in cells. When propofol attaches to the leading head, it weakens strain on the two-headed protein that prompts a step forward. The disruption allows ATP to bind to both heads, releasing them from the microtubule pathway. RMSD stands for root-mean-square deviation, a measure of the average distance between atoms in the simulation. (Credit: Mandira Dutta/Indian Association for the Cultivation of Science)