Each semester, new Big Questions courses from the School of Humanities invite all Rice students to explore the ways humanities inquiry helps us face the looming issues and essential inquiries of our time. 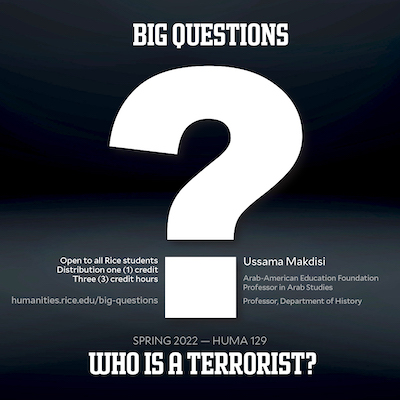 This spring, those Big Questions will ask students to consider the use of language and the cultural biases at play in who we call terrorists and what we call classics.

Who Is a Terrorist? is taught by professor of history Ussama Makdisi, the first holder of the Arab-American Educational Foundation Chair of Arab Studies at Rice. Among his books are  “Faith Misplaced: the Broken Promise of U.S.-Arab Relations, 1820-2001” and “Age of Coexistence: The Ecumenical Frame and the Making of the Modern Arab World.”

Terrorism as a term and concept originally came into use in the English language during the Reign of Terror amid the French Revolution that ended in 1799, and referred to violence perpetrated by a government or state. Well into the 20th century, “terrorism” still retained a different connotation than it does today — and now, the question of who qualifies as a terrorist is entirely subjective.

Does the answer depend on the religion of the perpetrator or the nationality of the victims? Why are some killings of innocent people widely discussed as evil while others are considered justified? What is the relationship between the discourse of terrorism and the reality of political violence? And what does “domestic terrorist” actually mean?

Drawing on examples of political violence from U.S. and global history as well as current events, Makdisi’s course will explore the high-stakes history of a contested term.

What Is a Classic? is taught by Joseph Campana and Scott McGill. Campana is the William Shakespeare Professor of English and director of Rice’s Center for Environmental Studies. McGill is the Deedee McMurtry Professor of Classical Studies whose course on Roman civilization is consistently waitlisted, highlighting a continued interest in classical studies. 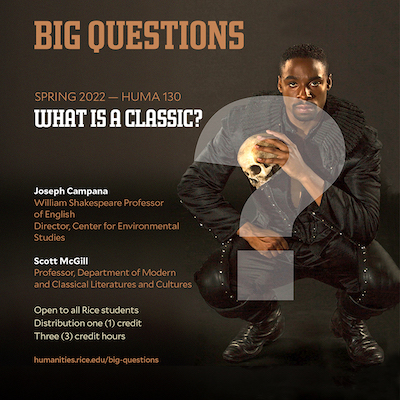 “Outmoded works by dead, white European males” could be one answer to the question of what makes a classic, Campana and McGill’s course suggests, and precisely why the academic world is experiencing a new and urgent reconsideration of the nature of classics, canons and traditions.

While “classic works” may seem to be legitimated by long-past authorities, this course will contemplate the ways in which classics are made and remade as those works are read, invoked and recast. And in the face of recent arguments for the dissolution of canons and the overturning of traditions, the course will also explore the complex and important ways in which various communities have found both solace and shelter in “classics.”

“This will be our sixth semester of Big Questions courses, and I am grateful for the variety and range of meaningful, bold questions that our faculty bring to the table each semester,” said Dean of Humanities Kathleen Canning. “By definition, there are no easy answers to these big questions and students are invited to leave their presumptions at the door.”