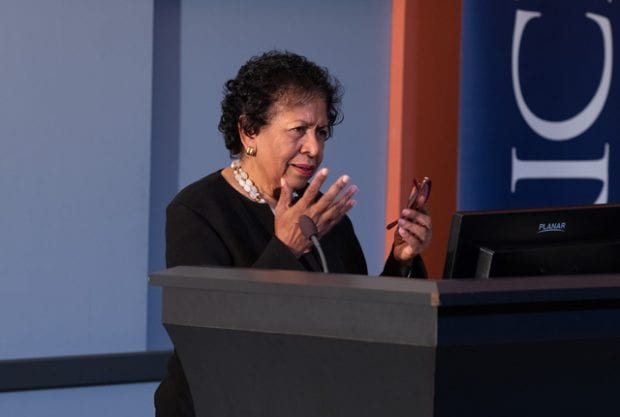 When she was president of an Ivy League university, Ruth Simmons learned the importance of confronting an institution’s complicated and controversial history head-on. Now, as a Rice trustee emerita and president of Prairie View A&M University, she has some thoughts and advice.

Simmons' Feb. 10 presentation, "From Legacies of Injustice to Healing Actions: The Way Forward," was hosted by the university's President’s Lecture Series and the Task Force on Slavery, Segregation and Racial Injustice. Rice President David Leebron established the task force to explore the university’s history in relation to slavery and racial injustice with the hope of generating campus dialogue and offering a better understanding of the past.

"I wish you the best with the work that you have undertaken here," said Simmons, who as president of Brown University launched a similar examination in the early 2000s. "I know you'll be successful. As long as the debate is honest and true, as long as the fact-finding is genuine, as long as you rely on the treasured expertise of universities and the wonderful processes used in the university, you will be fine."

Simmons said there are "such compelling reasons" to confront the legacies of slavery and related issues. "The delay in coming to terms with inhumane past practices not only forestalls the necessary societal healing required, but potentially creates among victims the impression of a willing, ongoing complicity with such actions," she said.

"Every day in this country that people refuse to draw links between the current status of some African American communities and the legacy of slavery, I can tell you that African Americans are very much convinced of this complicity," Simmons said. "The resentment created by this silence and inaction with regard to acknowledging fully perceived wrong adds further to the challenge of understanding, reconciling oneself to and moving beyond such wrongs. So our efforts at Brown attempted to tackle a two-century-old question that clung like ivy to the walls of the university."

In 1891, Rice's founder, William Marsh Rice, a businessman and slave owner from Massachusetts who made his fortune in Texas, chartered what originally was known as the Rice Institute for "the white inhabitants of the City of Houston, and State of Texas." The school did not admit black undergraduates until 1965, and old yearbooks show that the university had, albeit briefly, a student chapter of the Ku Klux Klan and instances of social gatherings featuring students in blackface as late as the 1980s.

"Although Rice University was founded nearly 50 years after the abolition of slavery, Rice has some historical connections to that terrible part of American history and the segregation and racial disparities that resulted directly from it,” Leebron wrote in announcing the Task Force on Slavery, Segregation and Racial Injustice to the university community. “As a university, it is part of our obligation to understand our history, and its connection to our present, as best we can.”

Leebron introduced Simmons, who has been president of Prairie View, a historically black university, since December 2017. Simmons previously served as president of Smith College and was the first African American president of an Ivy League institution, serving at Brown from 2001 to 2012.

"I would say that no one today brings the breadth of perspective on higher education that President Simmons does," Leebron said to the capacity audience gathered in Duncan Hall's McMurtry Auditorium.

Growing up a sharecropper’s daughter in the Fifth Ward in segregated Houston, Simmons showed determination and a love for books from an early age. She recounted how educator after educator pushed her to focus on the highest level of scholastic achievement, despite the limited educational opportunities open to black students at the time. She earned degrees from Dillard University in New Orleans and then Harvard University.

At Brown, Simmons learned that some of the school’s founders were likely prominent figures in the trans-Atlantic slave trade. She assembled the Committee on Slavery and Justice, which between 2003 and 2006 unearthed the true story of Brown’s founders and searched for ways to turn that legacy of slavery into something good.

"To confront the facts unflinchingly and to present what we learned to the world was our goal," Simmons said. "We chose to mark the moment of coming to terms with the past in the most transparent way possible. Proceeding in this way didn't require unanimity of perspective. We don't need to agree. We can have division, as long as we don't have shame and blindness to the facts. This process allowed us to move beyond recrimination to action and resolution."

The committee's work resulted in a prominent memorial on Brown's campus, the creation of a center for the study of slavery and injustice and increased efforts to recruit minority students, particularly from Africa and the West Indies.

Simply bringing the entire Brown community together to explore its history did wonders, Simmons said. "This process worked well for our community," she said. "The conversation and exploration of the history continues even today, with new participants. I expect that over time, the result of this work will continue to evolve in plain view of the university community."