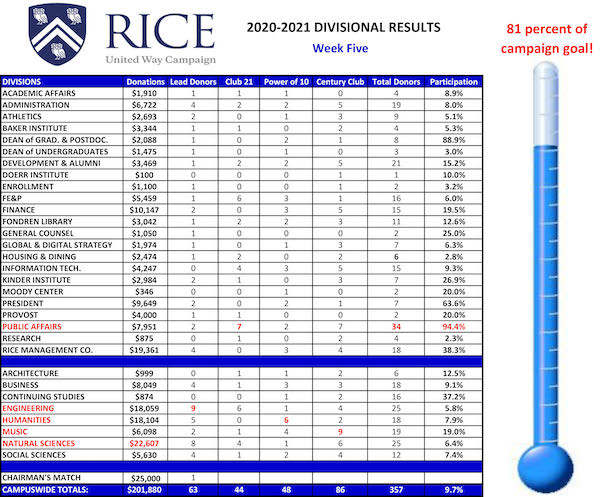 The School of Natural Science still leads Rice in total funds contributed to the campaign with $22,607 raised so far. Public Affairs continues to have the highest number of employees who have donated at 34, and finally surpassed the Office of Graduate and Postdoctoral Studies’ 88.9% participation rate with 94.4% of Public Affairs employees having donated so far.

Rice Board of Trustees Chairman Robb Ladd has now contributed $25,000 in funds to match the donations of new campaign participants and increased pledge amounts from previous donors. After hitting the 25K milestone, Ladd’s limited-time offer to match donations has ended.

Campaign pledges can be made through automatic payroll deduction through imagineOne, which are spread across all of an employee’s 2022 paychecks. Those interested in contributing any amount via cash, check, credit card payment or payroll pledge can get started by filling out the pledge form on the Rice United Way Campaign website, unitedway.rice.edu. The website also includes details on how to designate donations to be steered toward specific United Way agencies and initiatives.