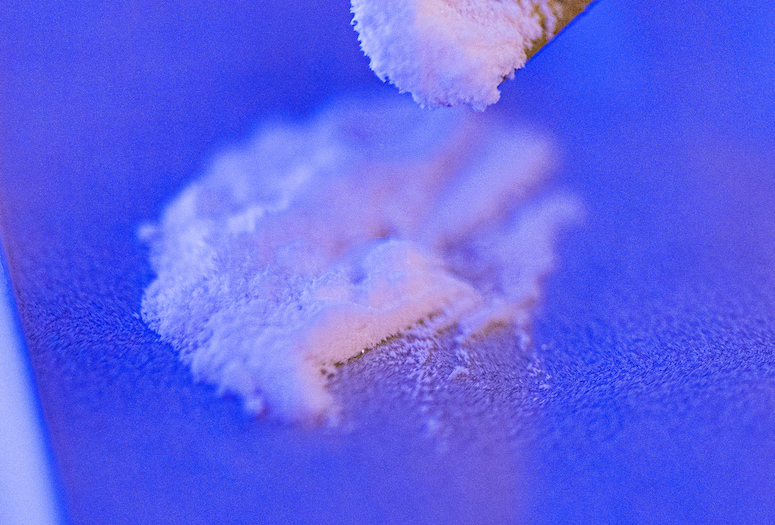 HOUSTON – (Nov. 15, 2021) – A Rice University undergraduate student’s grit and talent paid off in a big way when she introduced the first synthesis of a rare and potentially potent molecule drawn from poppies.

Anavi Serna, a junior, spent the duration of a summer fellowship in the Rice lab of synthetic chemist László Kürti chasing a sequence that would produce setigerumine I, an alkaloid molecule found in trace amounts in the poppy family Papaveraceae.

That natural setigerumine is a molecule the researchers described as “obscure and elusive,” and so hard to isolate it’s difficult for labs to study the molecule as a possible precursor for drugs or other products. But it was an apt target for Kürti’s lab, which develops or simplifies chemical paths for the synthesis of pharmaceutical building blocks used in drug design and manufacture.

Siitonen, who will become an assistant professor of organic chemistry at Aalto University in his native Finland in January, had been looking at setigerumine I, first isolated in 1993, and several other rare poppy extracts for a while.

“Because this molecule is isolated from poppies that also produce morphine, the likelihood that it has desirable biological properties is pretty significant,” Siitonen said. “We’ve been facing an opioid crisis for years now, so we clearly need better painkillers that are non-addictive. We don’t know if this is the one, because we’ve only just made it, but it might prove practical.”

The team’s paper appears in the journal Angewandte Chemie.

Serna said her first exposure to synthetic chemistry came in Kürti’s class, co-taught by Siitonen. “I had a brief introduction to organic chemistry in high school, and I didn’t like it,” she said. “It was all memorizing reactions and the products, and I didn’t really understand why things were happening. It wasn’t until I took this course that it started making more sense.”

Siitonen quickly saw her potential. “I showed the molecular structure to her and she said, ‘Oh, that’s complicated,’” he recalled. “But she wasn’t deterred.”

“Juha did what we should always do with talented students: Give them a challenge,” added Kürti. “It took her less than half the summer to basically get the key results.” That was followed by verification of the results that involved obtaining the molecule’s structure through nuclear magnetic resonance spectroscopy.

Siitonen compared synthetic chemistry to solving a Sudoku puzzle, though with more significant consequences. “We want to understand these chemical puzzles and see how the molecules should be made,” Siitonen said. “And because this molecule exists in nature, that it’s a real thing, we know it must be possible to synthesize.”

After a lot of trial and error, the solution turned out to be relatively simple. Their environmentally friendly process produced 20 milligrams of setigerumine I, enough to serve as a proof-of-concept for the synthesis.

“We were very happy, because we didn’t expect it would form so readily,” Serna said. “It was a really nice surprise.”

“We basically showed that noscapine and setigerumine I are chemically connected,” Siitonen said. “If somebody wants to produce setigerumine I, our process can now be further optimized.”

He noted the process taught the researchers about how poppies produce setigerumine I. “We also managed to indirectly prove how this thing actually comes about in nature, which has a lot of implications,” he said. “That includes the fact that it might not be the only natural product that belongs to this family.

“There might be plenty of these types of molecules in nature with the same structural motif that we just haven’t stumbled across yet,” he said.

Kürti is a Rice professor of chemistry. Siitonen is a Rice chemistry lecturer. The Osk. Huttunen Foundation, a Zevi and Bertha Salsburg Memorial Fellowship, the National Science Foundation (2102462), the National Institutes of Health (R35 GM-136373) and the Robert A. Welch Foundation (C-1764) supported the research. 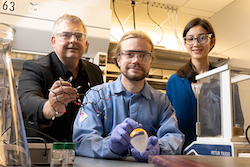 A Rice University lab has discovered a path to synthesis of a rare molecule drawn from poppies, setigerumine I. The molecule could become a building block for painkillers and other drugs. From left, Rice researchers László Kürti, holding a model of the molecule; lecturer Juha Siitonen, holding a flask of the synthesized setigerumine I, and undergraduate Anavi Serna. (Credit: Jeff Fitlow/Rice University) 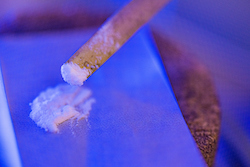 A sample of noscapine, which Rice University researchers used as a precursor in their synthesis of setigerumine I, an alkaloid molecule found in trace amounts in the poppy family. The molecule, a possible building block for drugs, was synthesized in a project led by undergraduate student Anavi Serna. (Credit: Jeff Fitlow/Rice University)