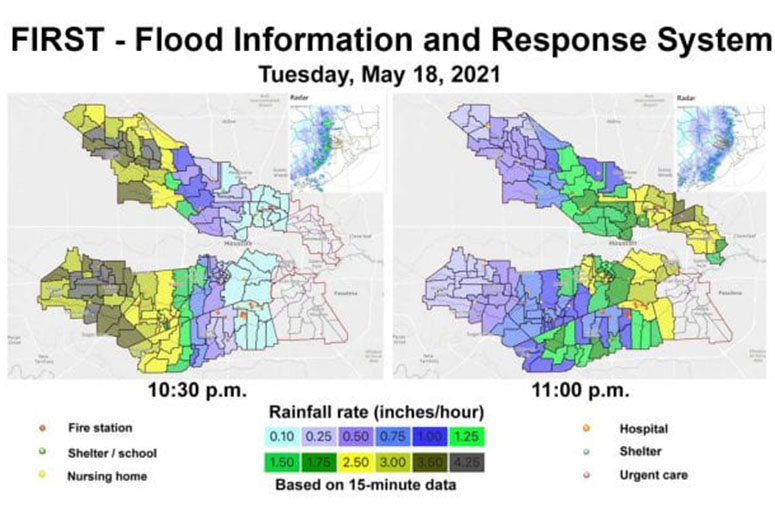 City officials have a new tool for planning and responding to flooding at hospitals and other critical facilities on the watersheds of Brays, Sims, Hunting and White Oak bayous. 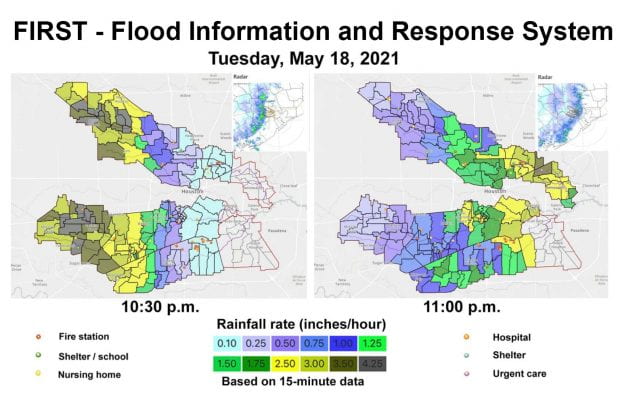 SSPEED Director Phil Bedient, the lead engineer on the project, said the idea for FIRST arose during the height of the pandemic.

"What if first responders have to go to a shelter, a nursing home or another facility where there's COVID, right in the middle of a flood," Bedient said. "The idea is to provide a tool that can help emergency managers better deal with situations with multiple risks."

Funded by the CARES Act and commissioned by the Houston Health Department, FIRST is similar to FAS5, the latest version of the Rice/Texas Medical Center Flood Alert System, which has performed accurately in more than 60 storms in Brays Bayou, including Tropical Storm Allison and Hurricane Harvey. Bedient created FAS more than 20 years ago, and FAS5 rolled out in 2020.

"The virus that causes COVID-19 was detected at all wastewater treatment plans in Houston, prompting concern that overflows could potentially expose nearby communities to the virus," said Loren Hopkins, chief environmental science officer for the Houston Health Department and professor in the practice of statistics at Rice. "The FIRST model assessed what areas and facilities are at highest risk of overflows that could spread SARS-CoV-2 and other pathogens during flooding and similar events. During a flood, the information gained through this system will inform the public health response to control the spread of pathogens that could make people sick."

To make FIRST, SSPEED hydrologists began by creating maps of the elevation, land use and slope on every tract of land within a watershed. Using a high-speed server, they run hundreds of simulations to determine how quickly and where water will rise during intense rainfall events.

"We built over 350 maps that are in there for all different combinations of rainfall," Bedient said. "We basically create what's called a flood plain map library. It's based on the same method employed in FAS5."

During a storm, weather radar is used to precisely measure how much rain is falling over each portion of the watershed at a given moment. That data, along with information from stream gauges on the bayous, is fed to a computer that compares the input with prepopulated scenarios from the map library. FAS5 has warned hospital officials in the Texas Medical Center as much as 2 1/2 hours before rising water has arrived at their doors.

FIRST's maps show the location of hospitals, nursing homes and fire stations in the four watersheds. The system includes tools that allow emergency managers to establish warning thresholds so they have access to flood level information during rain events.

"Luckily, I had trained these students in the summer," Bedient said. "This was right in the middle of COVID, and they all wanted some summer school activities to get credits. So, I trained them on how to build these map libraries using hydrologic software."

The funding to create FIRST was approved in the fall, and it had to be built before the CARES Act expired Dec. 31. So Bedient went back to the students and asked if they'd help meet the deadline.

"They performed herculean tasks," Bedient said of the students. "Our deadline was hard and fast, and they helped us deliver the operational project and report on time."

SSPEED's Nick Fang, associate professor of civil engineering at the University of Texas at Arlington, was instrumental in developing FIRST's web interface and software for incorporating radar data, Bedient said. He said the system performed well during last week's thunderstorms, and it will get even better after SSPEED engineers refine it's performance with data from those and other storms.

"It's like building a high-performance car," Bedient said. "You need to road test the car before it's fully operational."

To try out FIRST, visit http://firstcoh.org/first/demo.

https://news2.rice.edu/files/2021/05/0524_FIRST_May18-1030p-lg.jpg
CAPTION: A screenshot from Houston’s Flood Information and Response System (FIRST) shows real-time rainfall estimates over the watersheds of four Houston bayous during a thunderstorm at 10:30 p.m. May 18. (Image courtesy of SSPEED/Rice University)