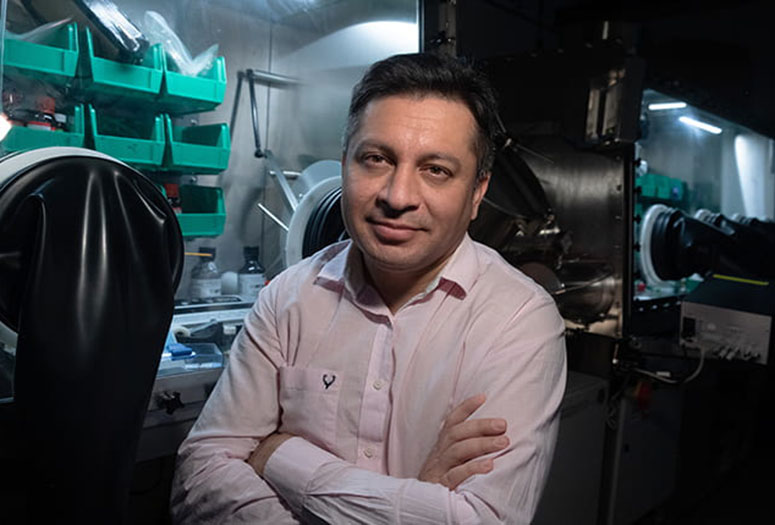 Rice University engineers have discovered technology that could slash the cost of semiconductor electron sources, key components in devices ranging from night-vision goggles and low-light cameras to electron microscopes and particle accelerators.

Manufacturers spend billions of dollars each year on photocathode electron sources made from semiconductors containing rare elements like gallium, selenium, cadmium and tellurium.

"This should be orders of magnitude lower in cost than what exists today in the market," said study co-corresponding author Aditya Mohite, a Rice materials scientist and chemical engineer. He said the halide perovskites have the potential to outperform existing semiconductor electron sources in several ways.

"First, there's the combination of quantum efficiency and lifetime," Mohite said. "Even through this was a proof-of-concept, and the first demonstration of halide perovskites as electron sources, quantum efficiency was only about four times lower than that of commercially available gallium arsenide photocathodes. And we found halide perovskites had a longer lifetime than gallium arsenide."

Another advantage is that perovskite photocathodes are made by spin coating, a low-cost method that can easily be scaled up, said Mohite, an associate professor of chemical and biomolecular engineering and of materials science and nanoengineering.

"We also found that degraded perovskite photocathodes can be easily regenerated compared to conventional materials that usually require high-temperature annealing," he said.

The researchers tested dozens of halide perovskite photocathodes, some with quantum efficiencies as high as 2.2%. They demonstrated their method by creating photocathodes with both inorganic and organic components, and showed they could tune electron emission over both the visible and ultraviolet spectrum.

Quantum efficiency describes how effective a photocathode is at converting light to useable electrons.

"If each incoming photon generates an electron and you collected every electron, you would have 100% quantum efficiency," said study lead author Fangze Liu, a postdoctoral research associate at LANL. "The best semiconductor photocathodes today have quantum efficiencies around 10-20%, and they are all made of extremely expensive materials using complex fabrication processes. Metals are also sometimes used as electron sources, and the quantum efficiency of copper is very small, about .01%, but it's still used, and it's a practical technology."

The cost savings from halide perovskite photocathodes would come in two forms: the raw materials for making them are abundant and inexpensive, and the manufacturing process is simpler and less expensive than for traditional semiconductors.

"There is a tremendous need for something that is low-cost and that can be scaled up," Mohite said. "Using solution-processed materials, where you can literally paint a large area, is completely unheard of for making the kind of high-quality semiconductors needed for photocathodes."

The name 'perovskite' refers to both a specific mineral discovered in Russia in 1839 and any compound with the crystal structure of that mineral. Halide perovskites are the latter, and can be made by mixing lead, tin and other metals with bromide or iodide salts.

Research into halide perovskite semiconductors took off worldwide after scientists in the United Kingdom used sheetlike crystals of the material to make high-efficiency solar cells in 2012. Other labs have since shown the materials can be used to make LEDs, photodetectors, photoelectrochemical cells for water-splitting and other devices.

Mohite, an expert in perovskites who worked as a research scientist at LANL prior to joining Rice in 2018, said one reason the halide perovskite photocathode project succeeded is that his collaborators in LANL's Applied Cathode Enhancement and Robustness Technologies research group are "one of the best teams in the world for exploring new materials and technologies for photocathodes."

Photocathodes operate according to Einstein's photoelectric effect, releasing free electrons when they are struck by light of a particular frequency. The reason quantum efficiencies of photocathodes are typically low is because even the slightest defects, like a single atom out of place in the crystal lattice, can create "potential wells" that trap free electrons.

"If you have defects, all your electrons are going to get lost," Mohite said. "It takes a lot of control. And it took a lot of effort to come up with a process to make a good perovskite material."

Mohite and Liu used spin-coating, a widely used technique where liquid is dropped onto a rapidly spinning disk and centrifugal force spreads the liquid across the disk's surface. In Mohite and Liu's experiments, spin-coating took place in an argon atmosphere to limit impurities. Once spun, the disks were heated and placed in high vacuum to convert the liquid into crystal with a clean surface.

"It took a lot of iterations," Mohite said. "We tried tuning the material composition and surface treatment in many ways to get the right combination for maximum efficiency. That was the biggest challenge."

He said the team is already working to improve the quantum efficiency of its photocathodes.

"Their quantum efficiency is still lower than state-of-the-art semiconductors, and we proposed in our paper that this is due to the presence of high surface defects," he said. "The next step is to fabricate high-quality perovskite crystals with lower surface defect densities.