This pyramid scheme could be helpful 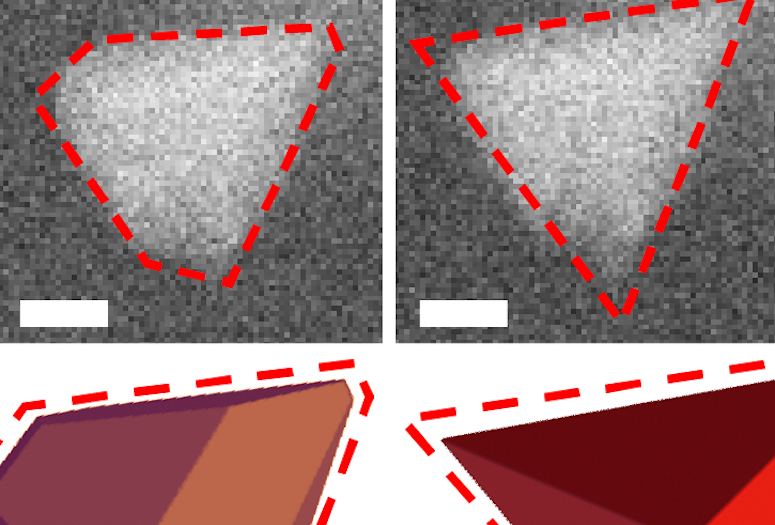 Nature clearly likes symmetry. Look at your own hands, for example. But sometimes nature produces asymmetric things, and the reasons aren’t always clear.

Rice University chemist Matthew Jones and his team have been seeking answers to such questions about useful nanoparticles -- and now appear to have one.

Video of a growing gold nanoparticle captured at Rice University through liquid cell transmission electron microscopy shows the particle’s transformation into a tetrahedron. Video courtesy of the Jones Research Group

In symmetry breaking, small fluctuations in a developing system determine the system’s fate. In this instance, it applies to the growth of crystals from nanoscale seeds that begin with a symmetrical atomic lattice.

The Rice researchers showed how balancing thermodynamic and kinetic forces during the crystallization process can be used to tilt particle growth in the desired direction. Their discovery also opens a path toward using asymmetrical nanoparticles as building blocks for unique metamaterials.

The technique developed by Jones and his lab allows researchers to watch single metal nanoparticles form in liquid through a window large enough to allow electrons to pass. In general use, transmission electron microscopes work in high vacuum and simply evaporate exposed liquids.

The researchers noted tetrahedron-shaped nanoparticles are often found as byproducts of other processes, but purposefully making them in the lab has proven to be a challenge.

“If a particle is a single crystal, it usually inherits the symmetry of the lattice,” Jones said. “And crystals tend to be highly symmetric, like cubes or rhombic dodecahedrons or octahedrons. But then there are these weird outliers some people see that mysteriously have a lower symmetry than the parent lattice.”

The new study is the first from Jones’ lab to show how well the liquid cell technique works. The ability to flow fluid containing ligands and precursors through the cell while they watch allowed them to home in on the point where growth goes astray and redirects the symmetry of the final nanoparticle product.

The key appeared to be the speed of growth and conditions under which gold atoms tended to attach themselves to particles at their tips and edges rather than the thermodynamically favored faces.

“Now that we’re able to screen a range of conditions, we were able to see a spectrum with kinetic growth on one end and equilibrium on the other,” Jones said. “Kinetic growth is rapid and protrusions grow very quickly and it’s not very well controlled. In equilibrium, growth is slow and the system does what it wants to do, which is to maintain symmetry.

“But liquid cell TEM allowed us to change one variable on the fly and see the behavior in the middle, where we could see this weird symmetry breaking and a well-defined tetrahedron particle come out. So we concluded this had to be a balance between equilibrium and kinetic factors.”

Jones said understanding that fundamental balance “should be generalizable to a variety of other conditions.”

He said the discovery also establishes liquid cell TEM as a valuable tool for the observation and analysis of dynamic chemical processes, potentially eliminating a lot of trial and error in the synthesis of particles for biomedicine, catalysis or nanophotonics.

“There’s nothing quite like being able to watch the whole thing happen,” he said. “That’s what this technique does. You’re not shooting photons at something and then having to do a bunch of analysis to interpret the results. You just watch the process. Seeing is believing.”

The Robert A. Welch Foundation (C-1954), the David and Lucile Packard Foundation (2018-68049) and Rice supported the research. Jones is the Norman and Gene Hackerman Assistant Professor of Chemistry and an assistant professor of materials science and nanoengineering.

An illustration shows the progression of a gold seed to a crystalline, asymmetrical tetrahedron nanoparticle. The images were captured at Rice University through a technique known as liquid cell transmission electron microscopy. (Credit: Jones Research Group/Rice University)