Programmed bacteria have something extra 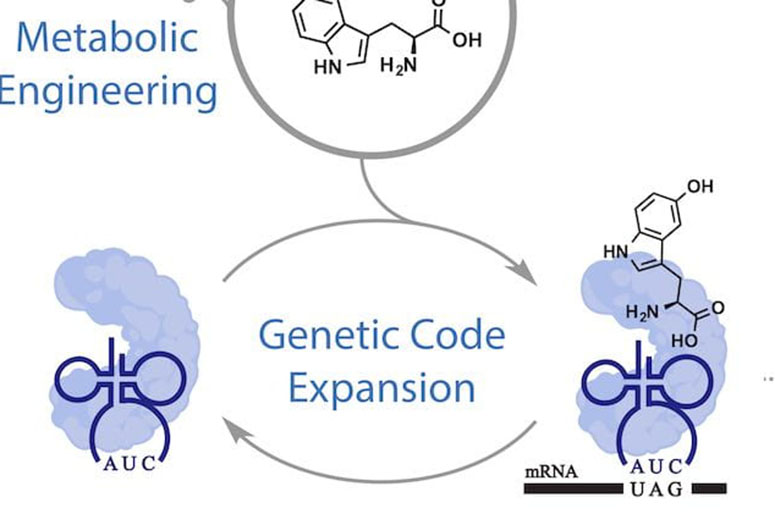 Rice University chemist Han Xiao and his team have successfully expanded the genetic code of Escherichia coli bacteria to produce a synthetic building block, a “noncanonical amino acid.” The result is a living indicator for oxidative stress.

The work, they say, is a step toward technologies that will allow the generation of novel proteins and organisms with a variety of useful functions.

Their study appears in the Cell Press journal Chem.

Amino acids are the building blocks of DNA. In general, organisms need only 20 of them to program the entire set of proteins necessary for life. But Xiao, with the help of a $1.8 million National Institutes of Health grant, set out to see how a 21st amino acid would enable the design of “unnatural organisms” that serve specific purposes.

The new study does just that by engineering bacteria to produce the extra amino acid, called 5-hydroxyl-tryptophan (5HTP), which appears naturally in humans as a precursor to the neurotransmitter serotonin, but not in E. coli. The novel production of 5HTP prompts the bacteria to produce a protein that fluoresces when the organism is under metabolic stress.

“The process requires a lot of interdisciplinary techniques,” Xiao said. “In this study, we combined synthetic chemistry, synthetic biology and metabolic engineering to create a strain that synthesizes and encodes a 21st noncanonical amino acid, and then uses it to produce the desired protein.”

Xiao said programming the autonomous unnatural bacteria was a three-step process: First, the researchers led by graduate student Yuda Chen created bioorthogonal translational machinery for the amino acid, 5HTP. Second, they found and targeted a blank codon -- a sequence in DNA or RNA that doesn’t produce a protein -- and genetically edited it to encode 5HTP. Third, by grafting enzyme clusters from other species into E. coli, they gave the bacteria the ability to produce 5HTP.

“These 5HTP-containing proteins, isolated from the programmed bacteria, can be further labeled with drugs or other molecules,” Xiao said. “Here, we show the strain itself can serve as a living indicator for reactive oxygen species, and the detection limit is really low.”

While researchers have reported the creation of more than 200 noncanonical amino acids to date, most of them cannot be synthesized by their host organisms. “This has been an ongoing field for decades, but previously people focused on the chemical part,” Xiao said. “Our vision is to engineer whole cells with the 21st amino acid that will let us investigate biological or medical problems in living organisms, rather than just dealing with cells in the lab.

“Moving this technology to the host species eliminates the need to inject artificial building blocks into an organism, because they can synthesize and use it on their own,” he said. “That allows us to study noncanonical amino acids at a higher, whole organism level.”

Ultimately, the researchers hope customized building blocks will allow targeted cells, like those in tumors, to make their own therapeutic drugs. “That’s an important future direction for my lab,” Xiao said. “We want cells to detect disease, make better medicines and release them in real time. We don’t think that’s too far away.”

The Cancer Prevention and Research Institute of Texas, the Robert A. Welch Foundation, a John S. Dunn Foundation Collaborative Research Award and a Hamill Innovation Award supported the research.