Study: Quantum fluctuations may give rise to topological phases of matter 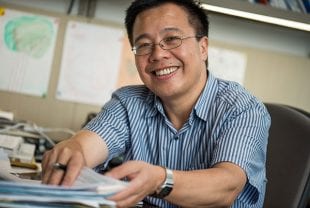 U.S. and Austrian physicists searching for evidence of quantum criticality in topological materials have found one of the most pristine examples yet observed.

In an open access paper published online in Science Advances, researchers from Rice University, Johns Hopkins University, the Vienna University of Technology (TU Wien) and the National Institute of Standards and Technology (NIST) present the first experimental evidence to suggest that quantum criticality — a disordered state in which electrons waver between competing states of order — may give rise to topological phases, "protected" quantum states that are of growing interest for quantum computation.

"The thought that underlies this work is, 'Why not quantum criticality?'" said study co-author Qimiao Si, a theoretical physicist from Rice who's spent two decades studying the interplay between quantum criticality and one of the most mysterious processes in modern physics, high-temperature superconductivity.

In the study Si and colleagues, including experimentalist Silke Bühler-Paschen, a longtime collaborator at TU Wien, and Collin Broholm of both NIST and Johns Hopkins, studied a semimetal made from one part cerium, four parts ruthenium and six parts tin. Topological phases have not been observed in CeRu4Sn6, but it is similar to a number of other materials in which these have been observed. And it is known to host the Kondo effect, a strong interaction between the magnetic moments of electrons attached to atoms in a metal and the spins of passing conduction electrons.

In typical metals and semiconductors, interactions between electrons are weak enough that engineers and physicists need not take them into account when designing a computer chip or other electronic device. Not so in "strongly correlated" materials, like Kondo semimetals. In these, the overall behavior of the material — and of any device built from it — relies on electron-electron interactions. And these are the interactions that give rise to quantum criticality.

In experiments at TU Wien and NIST's Center for Neutron Research, the team used magnetic susceptibility, specific heat and inelastic neutron scattering measurements to glean the quantum state of CeRu4Sn6 at very cold temperatures. The tests revealed the material is quantum critical in its native state without the need for any fine-tuning.

Quantum criticality arises when strongly correlated materials undergo a phase change at very low temperatures. The transformation is akin to the freezing of liquid phase water into solid phase ice at 32 degrees Fahrenheit. Phase changes in quantum materials also occur at critical temperatures, but the phases are quantum in nature. On one side of the critical point, electrons are ordered one way. On the other side, they are arranged in a different order. At the critical point, electrons are fickle, incessantly fluctuating between competing orders. This is quantum criticality — the pristine state measured in the CeRu4Sn6.

"Usually, you have to work to achieve that condition," said Wes Fuhrman, an alumnus of Broholm's lab at Johns Hopkins and one of the study's lead authors. "Finding these fluctuations is like hitting a bull's-eye that gets smaller and smaller as you lower the temperature. Here, the dilute electrons of the semimetal seem to act like trail guides to the quantum critical point."

While CeRu4Sn6 has not been proven to be topological, Si said he expects it eventually will be, in part because of its similarities to previous Weyl-Kondo semimetals, a class of materials he and Bühler-Paschen discovered in 2017 and explored further in February.

"To the extent that is the case, this work represents the very first step in realizing a still conjectured, conceptual framework where quantum criticality can be the reason for the emergence of strongly correlated topological semimetals," Si said.

Quantum states tend to be fragile, but in topological materials, patterns of quantum entanglement produce "protected" states that cannot be erased. The immutable nature of topological states is of increasing interest for quantum computing, in which quantum states are used to store and process information.

Si said the state of topological materials today is reminiscent of that of high-temperature superconductors in the 1990s.

Bühler-Paschen, whose team in Vienna has already discovered the first Weyl-Kondo semimetal material and synthesized the large single crystals needed for the neutron-scattering experiments said, "There are a few materials that have been realized, but to really get from a few isolated examples to lots of cases, like we have today for unconventional superconductivity, one needs to have a framework, a design principle."

The research was supported by Department of Energy Basic Energy Sciences through the IQM EFRC, the Gordon and Betty Moore Foundation, the European Union's Horizon H2020 program, the Austrian Science Fund, the National Science Foundation, the Welch Foundation, the ARCS Foundation, Lockheed Martin, KPMG, the Schmidt Science Fellows and the Rhodes Trust.

RCQM leverages global partnerships and the strengths of more than 20 Rice research groups to address questions related to quantum materials. RCQM is supported by Rice’s offices of the provost and the vice provost for research, the Wiess School of Natural Sciences, the Brown School of Engineering, the Smalley-Curl Institute and the departments of Physics and Astronomy, Electrical and Computer Engineering, and Materials Science and NanoEngineering.