A newly published book argues that a significant part of the public wrongly sees scientists who are atheists as immoral elitists who don’t care about the common good. 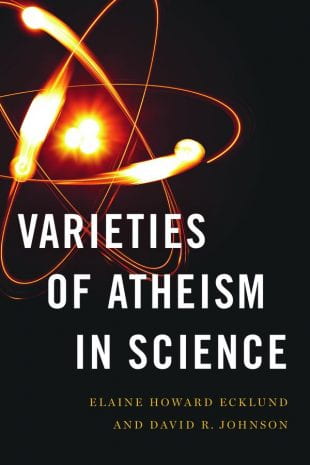 Misconceptions and distrust of science and scientists -- including those who are atheists -- have been amplified during the COVID-19 pandemic, according to the book’s authors, Elaine Howard Ecklund, the Herbert S. Autrey Chair in Social Sciences, professor of sociology and director of the Religion and Public Life Program at Rice University, and David Johnson, an associate professor of higher education at Georgia State University.

As it turns out, the "New Atheism" embraced by the likes of Richard Dawkins, Sam Harris and other notable scientists is at odds with the beliefs of most scientists who are atheists.

"Atheist scientists and religious communities, for example, certainly disagree about many things, but we found that they have so much more in common than they might think they share," Ecklund said. "Both groups often have a sense of fascination about the world, a sense of meaning and purpose and a desire to explain something larger than themselves."

For example, some atheist scientists identify as "culturally religious," which Ecklund and Johnson define as being meaningfully involved in religious traditions even though they are committed atheists. Often, these scientists have a religious partner or spouse and their children attend religious services.

"These individuals expressed that the moral frameworks from religion are important for living life well, and even for application of scientific work," Ecklund said. "I think it's really interesting and important to learn that some of these atheist scientists might be active participants in religious communities."

The authors said many scientists they interviewed were raised religious, and that bad experiences — including parents who dismissed their curiosity about science — led them to abandon their beliefs.

Other types of atheism the authors encountered in their study were modernist atheism (in which people have no religious views and don’t engage with faith traditions, but they’re not hostile to religion or religious people) and spiritual atheism (in which spirituality is important, often as it relates to research).

Ecklund and Johnson argue that improving the public’s perception of scientists requires uncovering the real story of who atheist scientists are.

“As the pandemic continues to ravage the global population, never before has it been more important to improve the relationship between the public and the science community,” Ecklund said.

Of the New Atheists, the book concludes, "It is now our responsibility to replace their rhetoric with reality."

More information on the book is available online at https://global.oup.com/academic/product/varieties-of-atheism-in-science-9780197539163?cc=us&lang=en&#.