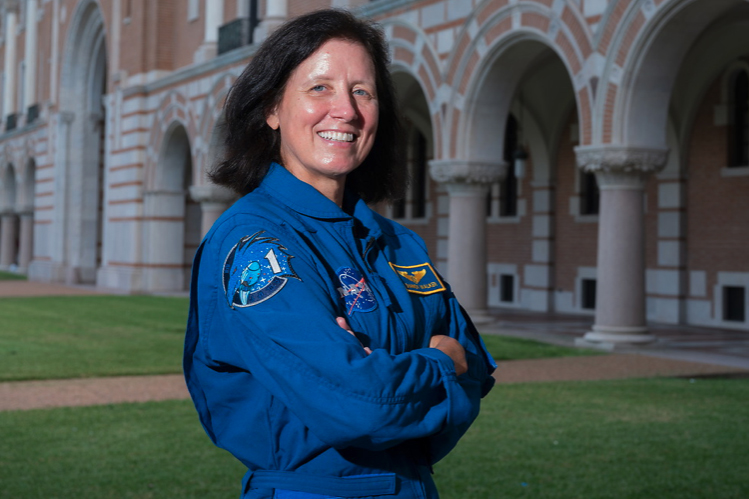 NASA astronaut and Rice alumnus Shannon Walker ’87 returned to campus Oct. 12 to present more than a dozen Rice-related mementos that flew with her during her latest six-month mission to the International Space Station.

Walker, who earned three degrees from Rice, returned to campus on Rice Day, the annual celebration of Rice’s founding in 1912. In welcoming Walker, Rice President David Leebron recalled the words of founding university President Edgar Lovett, who said Rice’s aspirations would have “no upper limit.”

“That also has a literal meaning as we celebrate today,” Leebron said. “(Lovett) would, I am sure, be extraordinarily proud that we've convened here 100 years later to celebrate the fact that NASA's first native Houstonian astronaut, a holder of three Rice degrees, has returned to Earth having served as a member of the first fully crewed commercial spaceflight in history, and the commander of the International Space Station.”

“No upper limit” was also commemorated by one of the items flown by Walker: a pair of Lovett’s eyeglasses that were on loan from Fondren Library’s Woodson Research Center.

Walker spent six months aboard the space station in 2010, and returned in November 2020 as a member of the historic SpaceX Crew-1 mission, the first commercial crewed operational flight to the station. Walker and three crewmates spent 167 days aboard the station before returning May 2 in the first nighttime splashdown at sea since Apollo 8 in 1968.

Prior to the presentation of mission memorabilia, Rice Space Institute Director David Alexander led a question-and-answer session. Walker, a Bakerite and former member of the Marching Owl Band, answered student-submitted questions about:

During her first spaceflight, Walker flew items from the Department of Physics and Astronomy. For her recent mission, she asked to fly items from the university as a whole. With assistance from Rice’s Office of Public Affairs, Walker flew and presented the following:

The audience for Walker’s visit was limited to 50 people due to NASA COVID-19 safety precautions, and Walker thanked those in attendance for taking precautions to help her avoid infecting fellow astronauts who are either flying to or returning from the space station in coming weeks.

A video of the event, with Walker’s full answers to the above questions and others, will be made available during Homecoming.