Nanotube fibers stand strong -- but for how long? 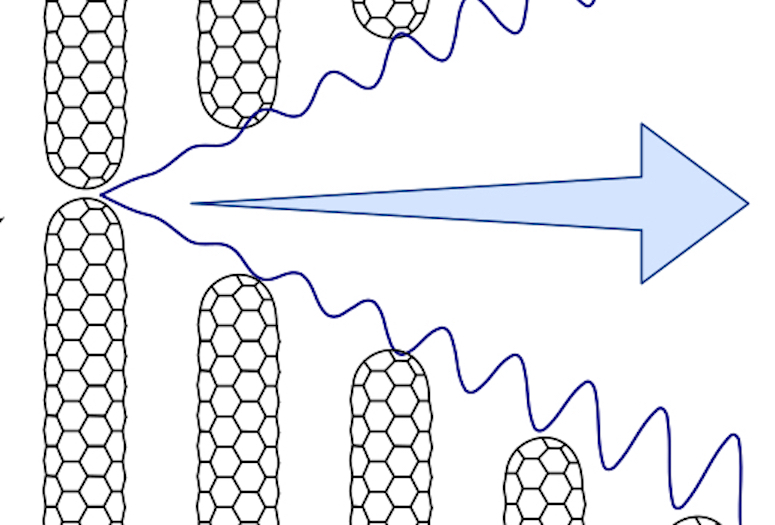 HOUSTON – (Dec. 22, 2021) – Up here in the macro world, we all feel fatigue now and then. It’s the same for bundles of carbon nanotubes, no matter how perfect their individual components are.

A Rice University study calculates how strains and stresses affect both “perfect” nanotubes and those assembled into fibers and found that while fibers under cyclic loads can fail over time, the tubes themselves may remain perfect. How long the tubes or their fibers sustain their mechanical environment can determine their practicality for applications.

A simulation shows the effect of axial stress on a carbon nanotube bundle over 10 cycles. Rice researchers calculate how cyclic strain and stress affects nanotubes and describe how fibers under cyclic loads can fail over time. Animation by Nitant Gupta

That made the study, which appears in Science Advances, important to Rice materials theorist Boris Yakobson,graduate student Nitant Gupta and assistant research professor Evgeni Penev of Rice’s George R. Brown School of Engineering. They quantified the effects of cyclic stress on nanotubes using state-of-the-art simulation techniques like a kinetic Monte Carlo method. They hope to give researchers and industry a way to predict how long nanotube fibers or other assemblies can be expected to last under given conditions.

“The time-dependence of an individual nanotube’s strength or endurance was studied long ago in our group, and now we’re contemplating its implications in the case of cyclic loading of the tubes and their fibers, or assemblies in general,” Penev said. “Recently, a couple of experiments reported that carbon nanotubes and graphene undergo catastrophic failure from fatigue without progressive damage. This was curious and surprising enough to reignite interest and ultimately led us to complete this work.”

Perfect carbon nanotubes, considered one of the strongest structures in nature, tend to remain so unless some dramatic impact takes advantage of their brittle nature and cracks them into pieces. The researchers found through atom-scale simulations that under ambient conditions and even when bent or buckled, nanotubes handle routine stress well. When point defects (aka Stone-Wales defects) do spontaneously appear, the effects on these “indefatigable” nanotubes are negligible.

They found the same principles apply to unblemished graphene.

But when millions of nanotubes are bundled into threadlike fibers or other configurations, the van der Waals force that binds the parallel nanotubes to each other doesn’t prevent slippage. Earlier this year, the researchers had demonstrated how friction between tubes leads to stronger interfaces between nanotubes and is responsible for their incredible strength. Using this model, they now tested how fatigue can set in under cyclic loads, and how that ultimately leads to failure.

Every time a nanotube fiber is stretched or strained, it will mostly recover its original form once the tension is released. “Mostly” is the key; a little bit of residual slip remains, and that can increase with each cycle. This is plasticity: deformation with irreversibly incomplete recovery.

“The cyclic loading of nanotube fiber causes neighboring tubes to either slip away or toward each other, depending on which part of the cycle they are in,” Gupta explained. “This slip is not equal, causing an overall strain accumulation with each cycle. This is called strain ratcheting, as the overall strain always increases in one direction just like a ratchet moves in a single direction.”

Rice University researchers determined several ways a nanotube experiences plastic failure, either through dislocation movement under 6% strain (top) or through shear band formation under 14% strain (bottom). Both mechanisms, seen in kinetic Monte Carlo simulations, only activate under extreme conditions, so neither appears to be a significant factor in fatigue of the nanotubes. (Credit: Animation by Nitant Gupta/Yakobson Research Group)

The researchers noted that state-of-the-art fibers should be able to overcome the risk of failure by outlasting the inevitable slippage.

“As we know, some of the best nanotube fiber production strategies can lead to a tensile strength higher than 10 gigapascals (GPa), which is incredible for their application in everyday life,” Gupta said. “We also found from our tests that their endurance limit can be 30%-50%, which means that at least up to 3 GPa the fibers may have practically infinite life. That’s promising for their use as low-density structural materials.”

The Air Force Office of Scientific Research (FA9550-17-1-0262) and the Welch Foundation (C-1590) supported the research, and computer resources were provided by the National Science Foundation-supported Extreme Science and Engineering Discovery Environment (ACI-1548562) and the Night Owls Time-Sharing Service cluster at Rice (CNS-1338099). Yakobson is the Karl F. Hasselmann Professor of Materials Science and NanoEngineering and a professor of Chemistry.

A simulation shows the effect of axial stress on a carbon nanotube bundle over 10 cycles. Rice University researchers calculate how cyclic strain and stress affects nanotubes and describe how fibers under cyclic loads can fail over time.(Credit: Animation by Nitant Gupta/Yakobson Research Group)

Rice University researchers determined several ways a nanotube experiences plastic failure, either through dislocation movement under 6% strain (top) or through shear band formation under 14% strain (bottom). Both mechanisms, seen in kinetic Monte Carlo simulations, only activate under extreme conditions, so neither appears to be a significant factor in fatigue of the nanotubes. (Credit: Animation by Nitant Gupta/Yakobson Research Group)

Rice University researchers found that cyclic loading of nanotube fibers leads to strain ratcheting that can eventually lead to the failure of the fiber. (Credit: Illustration by Nitant Gupta and Evgeni Penev/Yakobson Research Group)