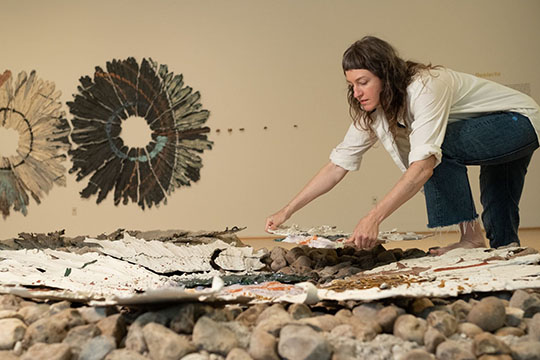 Earth in all its forms spreads across the Moody Center for the Arts like nature reclaiming a structure after its inhabitants have left. A long streak of smeared clay beginning on one wall at the entrance leads your eye into the Moody’s main galleries, where artist Brie Ruais’ work has transformed them — both inside and out — into new landscapes, rich with color and texture.

Large mounds of rocks and dirt trail across the sprung-wood floor of the Central Gallery, each topped with Ruais’ abstract ceramic sculptures: unique eruptions of energy, spattered and swirling with color. More ceramic work hangs on the walls, like sunbursts over a desert planet, while other mounds spread across the Moody’s patio and lawn outside. One is split in half by the gallery’s large sliding glass doors. Another is made from sod and clay dug out of the lawn itself.

And this is to say nothing of the Moody’s Brown Foundation Gallery, which features Ruais’ more “experimental” work, including a brand-new, three-channel video piece, evoking a contrasting seaside landscape.

“Brie Ruais: Movement at the Edge of the Land,” which opened June 5 and runs through Aug. 28, is the Brooklyn-based artist’s first institutional solo exhibition. It’s also unique for its relationship between the interior and the exterior, in dialog with the Rice campus itself.

“I was stunned to be invited to occupy both spaces,” Ruais said.

“Outdoors as well,” Moody associate curator Frauke Josenhans added, gesturing to the piles of earth both inside and out that were all created over the course of a week using front-loaders, muscles and shovels.

This part of the exhibition is site-specific, created mostly with materials from local landscaping companies, while others are part of Ruais’ existing body of work, which spans media from aerial photography to rough aggregate to richly pigmented clay. What that body of work has in common is her body itself, which Ruais uses as a tool.

Inside, her abstract ceramic sculptures interact with the physical space of the gallery. Some appear to be pushing the walls apart;, others seem to have been painted directly onto the walls with a giant brush.

“As you can see, they're extremely large scale, and they have this very strong, spatial presence, yet at the same time, they also look fragile in a way,” Josenhans said.

And just as a painter uses a brush, you can see the strokes of Ruais’ own appendages in the pieces she creates. Taking amounts of clay equivalent to her own body weight for each piece — roughly 130 pounds — Ruais spreads the clay on the floor and manipulates it with her hands, her feet, her knees, her whole corpus, in an act of performance.

You can see the indentations of her toes or the tight denim pattern of her jeans on the large-scale ceramics mounted to the gallery walls, something Ruais calls “mutual recognition.” Some of the finished pieces bend and fold on top of each other like waves, others spread apart like crackling mud in the sun, some are loosely woven like a tangle of limbs. Most of the clay is fired; other pieces, like one that spreads across the floor of the Brown Foundation Gallery, are raw clay that will shrink and change over the next few months.

“My works are the result of a movement-driven experience with clay, one that at times feels collaborative,” Ruais said. “I'm sensitive to the material’s nature, its ability to push back, its ability to challenge, and I open up a space for the clay to be itself: I allow it to crack, break and warp, and I embrace its final form.”

Twenty years spent working in her Brooklyn studio have made Ruais acutely aware of the city’s island nature, its urban core surrounded by water. And alone on the parcel of land she owns in Nevada, she is surrounded by the Great Basin Desert. Both environments are reflected in “Movement at the Edge of the Land,” although Ruais also plays off local elements as well: Houston’s gumbo soil and oyster middens and the strong, sharp lines of the Moody’s galleries both influence the art Ruais created for the show.

One of the foremost young sculptors today, Ruais has also made forays into land art — bringing clay to remote sites and making marks and gestures in response to the locations, which she photographs from above using a drone to draw attention to the widespread effects of environmental degradation — and video work, which she’s excited to have on display for this new solo show.

“The video brings out things in the work that I hadn't anticipated,” Ruais said. It was one of the pieces Ruais showed Josenhans in 2019, which was when Josenhans first visited her Brooklyn studio. Initially scheduled for exhibition in 2020, before the COVID-19 pandemic put the plans on pause, the show has been a long time in the making.

During that yearlong break, however, Ruais and Josenhans had an opportunity to think through the exhibition and its components. The video work, for instance, opened up possibilities in dialog between the movement in the video and the fluid yet static movement in the ceramic works, Ruais said.

As the long-awaited show began shaping up, Josenhans and the Moody were determined to give Ruais the freedom to make something truly spectacular — and to deeply engage with topics ranging from the use of land, to the exploitation of natural resources, to our personal relationships to both the built and natural environment.

“I'm so happy that we were able to offer all of this gallery space to Brie and allow her to make such a monumental installation, where she can really have the space — not only the physical space, but also the mental space — to create something that is so unique and yet really responds and connects to the Rice campus and to Houston, but also echoes her own personal experience,” Josenhans said.

In both its materials and construction, Ruais’ work also offers a sense of grounding one to the earth. We are such small parts of a massive ecosystem that will outlast every cloud server and microchip, although this is easy to ignore in a world increasingly consumed by technology.

“Pulling the show off and making this work required a lot of physicality, and I think that's interesting. We were able to be in touch with the labor that’s required to move through the world,” Ruais said. “We're often so oriented through the mind, and especially so now, with the prevalence of the virtual world, that to engage the body feels really powerful.”

“Brie Ruais: Movement at the Edge of the Land,” June 5-–Aug. 28. Moody Center for the Arts. Free and open to the public. For more information, visit moody.rice.edu.