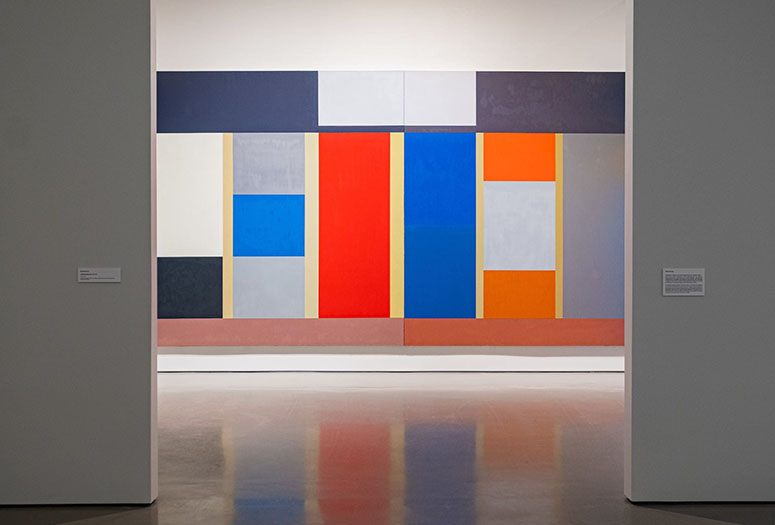 Without spoiling anything, there is a moment in the new spring exhibition at Rice’s Moody Center for the Arts that feels like walking into an homage to the Rothko Chapel — a cloistered and serene inner sanctum that feels at once expansive and thought-provoking. It’s fitting for a show celebrating a half-century of one of Houston’s most iconic destinations.

“This project both celebrates the history of the arts at Rice, and highlights our long-standing connections to the cultural life of Houston,” said Alison Weaver, the Suzanne Deal Booth Executive Director of the Moody Center. When the Moody team realized the 50th anniversary of the Rothko Chapel was approaching, she said, “we wanted to explore the extraordinary impact the Chapel has had on artists from diverse backgrounds, working in a wide range of media.”

At the heart of the show is a recreation of the 1975 exhibition “Marden, Novros, Rothko: Painting in the Age of Actuality” that was supported by Dominique de Menil, then the director of the Institute for the Arts at Rice, and originally staged in Rice’s now-demolished Art Barn. The restaged exhibition at the Moody, presented inside the Brown Foundation Gallery, is the first time in the 45 years since that show that Marden and Novros’ works have been reunited.

It was no small task for associate curator Frauke Josenhans, who organized the project. Not only had these works ended up in separate collections across Texas, from the Menil to the Modern Art Museum of Fort Worth, the panels themselves are massive on their own, even more so when they’re reunited.

But the impression upon completion, hung on equally giant walls custom-built for the occasion, is stupendous. Walking into each of the three “rooms” created by the paintings, you’re immersed in color.

“That's how David (Novros) describes them — how he wanted them to be seen and experienced,” Josenhans said. “It's very similar to when you walk into a medieval church in Italy, and suddenly you find yourself surrounded by early 15th century Renaissance frescoes — color is everywhere, and color is the binding element that creates this very immersive environment.”

In addition to a series of 1975 color studies by “grand old master painter” Marden that were also part of the original exhibition, a couple of the artist’s more recent works that continues to explore his interest in both chromatic abstraction and the passing of the seasons are also on display. They include a 2009 piece and a work composed of four large sheets, shown at Rice for the first time.

In the Central Gallery, the work of other contemporary artists engages color with similar intensity: The great disruptor of Color School painting, Gilliam, at age 87 demonstrates new techniques in pyramidal sculptures created last year for an exhibition at Pace Gallery in New York. They sit adjacent to some of Gilliam’s monumental washi paper paintings on the walls, in a conversation of sorts.

“The Questioning Column,” a rainbow-hued work by 84-year-old textile artist Hicks, is draped from the Moody’s towering oculus outside, while a stunningly intricate piece by Houshiary, who works across such diverse media as sculpture, video installations and architecture, greets visitors at the Moody’s main entrance: a vibrant red painting that looks like both a distant nebula and the inner workings of a human blood vessel.

Houshiary’s work continues in the Central Gallery, with an installation that mirrors Novros’ immersive quality: Inside a tall, dark tent formed by heavy black-out curtains, you’re surrounded by a repeating loop of voices chanting Buddhist, Christian, Jewish and Muslim prayers while small video screens — the only things visible in the dark — show visualizations of the chanters’ breath patterns.

Works by Kim, this season's Leslie and Brad Bucher Artist-in-Residence at the Moody, round out the exhibition — including new paintings created specifically for this show. Kim, who first drew international attention for his 1991 skin tone-influenced work “Synecdoche,” presents paintings that evoke the ocean in all its temperaments in one gallery. In another gallery, larger-scale works depict the bruise-colored night sky over his Brooklyn studio.

In addition to working with students throughout the semester (online, due to pandemic restrictions), Kim will join poet Mei-mei Berssenbrugge for a conversation around the topic of water in a Feb. 25 Artists-in-Dialogue talk that’s free and open to the public.

The talk is one of many events the Moody has planned around the Rothko exhibition, both virtual and in person. Kim will introduce a virtual screening of Andrei Tarkovsky's seminal 1972 film "Solaris" on March 12 in a co-presentation with Rice Cinema.

April 10, the DACAMERA Young Artist Program will perform musical responses to the exhibition, featuring both original compositions and historic works by Rothko-inspired composers such as John Cage and Morton Feldman. And April 22, look for another Artists-in-Dialogue talk — this one with Houshiary in a co-presentation with Rice’s Religion and Public Life Program.

The exhibition will be also accompanied by a catalog including new installation images, interviews and contributions by the artists alongside testimonies by local figures reflecting on the interconnectedness of the Rothko Chapel and the arts at Rice. The catalog, distributed by Yale University Press, will be available in May.

Pulling together a show like this would be feat enough under non-pandemic conditions. It would have been easy, Josenhans said, for anyone involved to say “sorry, no” at any point along the way. But the way the artistic community has come together to create something of this scale has been inspiring, she said — and totally in keeping with the Rothko’s mission.

“Everyone was extremely supportive, from the artists to the institutions,” she said. “Everyone really stepped up.”

And after nearly two years of work, it’s all come together at last.

“The Rothko Chapel is a place that brings people together,” Josenhans said. “And I think that is also the spirit that we tried to convey in this exhibition.”

“Artists and the Rothko Chapel: 50 Years of Inspiration” will be on view at the Moody Center for the Arts from Feb. 16 to May 15. The Moody is free and open to the public. For more information, visit moody.rice.edu.