Mars, happy to see you again 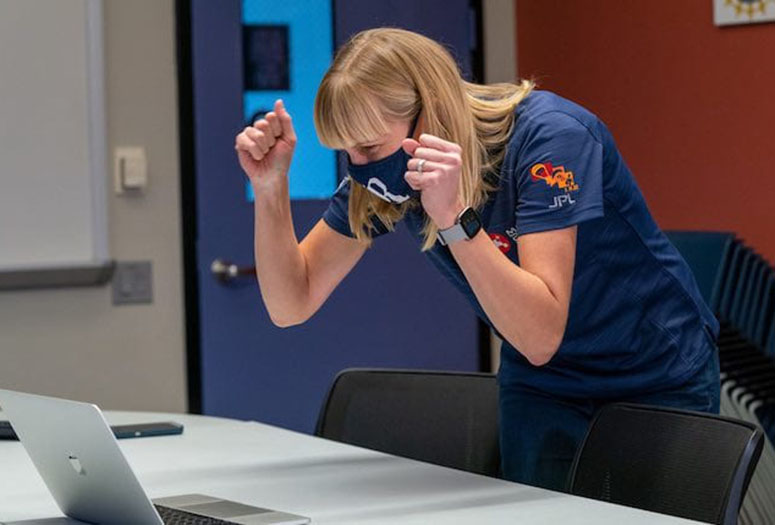 Terror, be gone! This happy landing was pure delight.

It remains to be seen how well the Perseverance rover and its helicopter, Ingenuity, perform as they traverse the surface of Mars, but for the moment NASA and Rice geologist Kirsten Siebach are getting a moment to celebrate with the spacecraft’s long-awaited successful landing on Feb. 18.

Siebach and her colleagues gave an hourlong talk and Q&A session via Zoom before the notorious “seven minutes of terror,” during which the spacecraft would be on its own to execute the complex landing sequence to Jezero Crater.

The action shifted to Rice’s Visualization Laboratory, where Siebach shared her reaction to live reports from mission control at the Jet Propulsion Laboratory at Caltech with Rice video producer Brandon Martin.

The Perseverance work for Siebach is just beginning as she assumes her duties as a mission specialist tasked with helping operate the rover and scout for samples that will ultimately be brought back to Earth. These, she said, will lead to years of study to determine what Mars is made of, and whether life in any form ever existed there.

In the meantime, she is still studying data from the last rover to land, Curiosity, in 2012. She recently issued a paper that concluded the region’s climate was once like Iceland, and just this week was part of a paper that revealed the chemical contents of aqueous processes on a mixture of amorphous materials found at Gale Crater. That evidence suggests water persisted at Gale Crater for about 1 billion years.