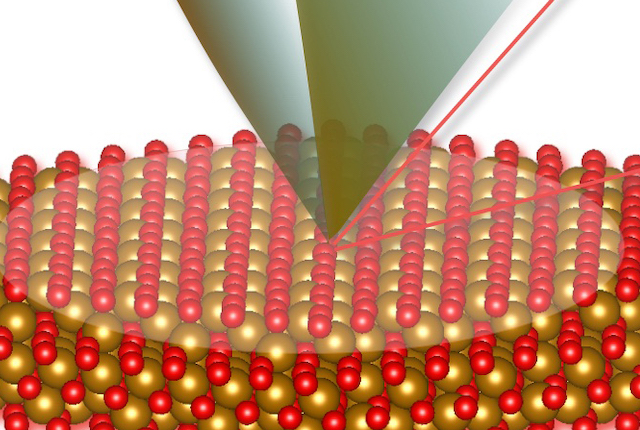 Rice University materials scientists have helped colleagues at the University of Toronto make the first measurements of ultra-low friction in magnetene, a 2D material derived from magnetite.

The collaborators have discovered the material derives its slippery properties from the quantum effects that exist along its surface. The result, which appears in Science Advances, points the way toward the design of similar low-friction materials for use in a variety of fields, including small implantable devices.

The Rice lab of materials scientist Pulickel Ajayan, a co-corresponding author of the paper, provided magnetene to the Toronto group by directing high-frequency sound waves at bulk magnetite, a form of iron oxide. This gently separated layers consisting of only a few sheets of magnetene.

The Ajayan lab first reported its liquid exfoliation isolation of magnetene, as well as its quantum confinement-induced magnetic properties, in October 2020 in the journal Small.

Atom-thick magnetene is similar to graphene, which has been studied intensively for its unusual strength, conductivity and other properties — including ultra-low friction — since its discovery in 2004.

“Most 2D materials are formed as flat sheets,” said Toronto graduate student and lead author Peter Serles. “The theory was that these sheets of graphene exhibit low friction behavior because they are only very weakly bonded and slide past each other really easily.

“You can imagine it like fanning out a deck of playing cards,” he said. “It doesn’t take much effort to spread the deck out because the friction between the cards is really low.”

The Toronto team set out to test this theory by comparing graphene to other 2D materials, including magnetene from Rice, using an atomic force microscope to probe the sheets to measure friction. Serles compares it to dragging a needle across the surface of a vinyl record.

“The bonds between the layers of magnetene are a lot stronger than they would be between a stack of graphene sheets,” he said. “They don’t slide past each other. What surprised us was the friction between the tip of the probe and the uppermost slice of magnetene. It was just as low as it is in graphene.”

Until now, scientists had attributed the low friction of graphene and other 2D materials to the weakness of the van der Waals force. But the behavior of magnetene, which doesn’t exhibit van der Waals force due to its structure — more like a jungle gym, with atoms on several levels — suggested that something else was going on.

“When you go from a 3D material to a 2D material, a lot of unusual things start to happen due to the effects of quantum physics,” Serles said. “Depending on what angle you cut the slice, it can be very smooth or very rough. The atoms are no longer as restricted in that third dimension, so they can vibrate in different ways. And the electron structure changes too. We found that all of these together affect the friction.”

The results should interest anyone who wants to design ultra-low-friction materials as lubricants in small-scale applications, like implants that could control the release of drugs or use a beating heart’s energy to power a sensor.

“When you’re dealing with such tiny moving parts, the ratio of surface area to mass is really high,” said Toronto mechanical engineer Tobin Filleter, co-corresponding author on the new study. “That means things are much more likely to get stuck. What we’ve shown in this work is that it’s precisely because of their tiny scale that these 2D materials have such low friction. These quantum effects wouldn’t apply to larger, 3D materials.”

With the new results, the Rice team plans to look at how magnetene’s slippery surface reacts in a magnetic field, and whether that can be used to improve implants or other tiny electronic devices.

“It may be that applying a magnetic field reorients the magnetene crystal, hence the frictional properties, in a way that could help or enhance our capability to control magnetic materials inside the body to emit heat by frictional heating during physical rotation in addition to magnetic hyperthermia,” Puthirath said.

“We are now expanding our ability to look at a whole range of 2D materials, obtained from traditional layered materials as well as non-layered systems, so we can explore new exciting properties in these structures,” Ajayan said. “Magnetene represents one of the newest family members with outstanding frictional behavior.”

The Air Force Office of Scientific Research (FA9550-18-1-0072), the Natural Sciences and Engineering Research Council of Canada Discovery (RGPIN-2018-04642) the Canada Foundation for Innovation and a Vanier Canada Graduate Scholarship supported the research.