Letter from Board of Trustees Chairman Robert Ladd on President Leebron 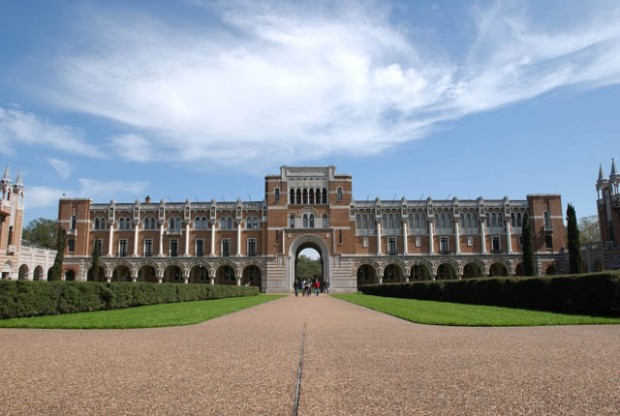 A short while ago, President Leebron notified the university community of his decision to step down from the Rice presidency at the end of the 2021-2022 academic year. On behalf of the Board of Trustees, I want to express our deep appreciation and esteem for what David has done to transform our university, while preserving its core values and community.

Over what will be an extraordinary 18 years of service, David has had the vision, courage and determination to improve every aspect of this university. I will touch on a few here. Our reputation as a premier research university is on a far higher level and trajectory. Our student body is larger and more diverse, and that has been supported by greatly enhanced financial aid. Our engagement with the city of Houston is significantly deeper. Our international visibility and engagement is immensely increased. As important, our campus has been transformed to support these heightened ambitions and achievements.

This success was fostered by the inclusive development of a strategic vision of Rice as a premier research university that provides a unique educational experience for our students. David spearheaded the creation of the Vision for the Second Century in 2004-05 and oversaw its implementation. Three and a half years ago he led the creation of a renewed Vision for the Second Century, Second Decade, which is well on its way to realization. David never hesitated to explore bold opportunities, but ultimately always made decisions that were best for our university. And while David would be the first to say that it was the faculty, staff and students across the university who made the achievements listed below possible, they would not have been possible without the leadership teams and the innovation and collaboration that he nurtured. Let me add my deep appreciation for all they have accomplished.

The visibility, reach, stature and impact of our university are stronger than ever. As just one manifestation, undergraduate applications have increased from 8,100 for the class entering in 2004 to almost 30,000 for the class entering in fall 2021, and applications from outside Texas increased even more, from 4,697 to 21,502. As a result, the admit rate has dropped from 22% to 9%, which puts us in the very top tier of universities in terms of selectivity. Our student population has become far more international, with about one fourth of our students coming from other countries. We have built relationships, research and educational, with universities on every continent (except Antarctica). David has also been recognized by colleagues outside Rice and advanced our visibility with his leadership roles as chair of the Association of American Universities, Consortium on Financing Higher Education and Internet2, as well as his membership on the executive committee of the NCAA.

The student body has grown from 4,855 when David arrived in fall 2004 to about 7,500 in fall 2020 and is expected to reach 9,000 by 2025 as the result of the expansion now under way. And within that growth is a dramatic expansion of the racial, socioeconomic and geographic diversity of our student body, which adds so much to their education and experiences and to the vitality of our community. Key to our commitment to access was the creation of the innovative financial aid program, the Rice Investment, which received national attention for its generosity and transparency. And the enrollment growth has not been solely on campus, as Rice has established itself as an innovative leader in online education, including multiple online masters programs and more than 800,000 enrollments in various online courses.

As part of our V2C and V2C2 goals, Rice’s research impact and profile have grown rapidly. Research awards have increased from $72 million in FY 2004 to $172.5 million in FY 2020. Rice’s growing recognition as a research powerhouse has brought many new opportunities, including most recently the $100 million investment by the Welch Foundation in the Welch Institute and the $30 million federally funded National Research Accelerator. The faculty has grown from 579 full time equivalents in fall 2004 to 748 in fall 2020, with further enlargement now under way and recognitions of their achievements increasing as well.

We have invested strongly in many academic and research endeavors across the university, including data sciences, materials science and neuroengineering programs, and the new sociology and art history doctoral programs. New majors, minors and centers were added. Early on, David reorganized the administration to focus more effectively on education and the student experience, creating the new positions of dean of undergraduates and dean of graduate and postdoctoral studies, and more robust offices to address the needs of our students. Important new centers and institutes for research and education created during David’s tenure include the Doerr Institute for New Leaders, the Kinder Institute for Urban Research, the Chao Center for Asian Studies, the Center for African and African American Studies, the Boniuk Institute for the Study and Advancement of Religious Tolerance, the Program in Jewish Studies, the Center for the Study of Women, Gender and Sexuality, the Houston Education Research Consortium, OpenStax, the Liu Idea Lab for Innovation and Entrepreneurship, Rice 360 Institute for Global Health, the Center for the United States and Mexico at the Baker Institute, the Texas Policy Lab and many more.

Our physical campus has been transformed during David’s tenure, serving research and teaching missions better, creating a more dynamic environment and enabling us to recruit and retain an extraordinary faculty. With more than $1.8 billion in construction that is still ongoing, the new and renovated buildings and facilities that make Rice’s leading education and research endeavors possible have added not only capacity (29 new buildings and 2.5 million square feet since 2004) but beauty to the campus. Just a few of the key projects in science and engineering include the Biosciences Research Collaborative, the Brockman Hall for Physics, the Oshman Engineering Design Kitchen and expansion, renovation of the Space Science Building including a new clean room, the MD Anderson Biological Laboratory and what soon will be Maxfield Hall. The new engineering and science building will further advance research and teaching. The construction of Kraft Hall for Social Sciences and the addition of Cannady Hall to our architecture facilities assure those schools will have the facilities they need.

David emphasized the role of the arts at Rice, and the west end of campus is becoming the arts quadrant he envisioned with the construction of the Moody Center for the Arts, the Brockman Hall for Opera and soon the Sarofim Hall for Visual and Dramatic Arts. The Public Art program, launched in 2008, now includes 34 pieces across campus, including the James Turrell Skyspace. The Anderson-Clarke Center, home of the Glasscock School of Continuing Studies, provides the outstanding facilities to support greater educational outreach to Houston and, via online courses, far beyond.

The vibrancy of campus life has been greatly enhanced, especially as the result of David’s vision for the Central Quadrangle. We now have the Brochstein Pavilion for gatherings and soon an extraordinary new student center. The construction of the Gibbs Recreation Center further established the role of the central quad. Other new and refurbished athletics facilities, including Tudor Field House, the Patterson Sports Performance Center, George R. Brown Tennis Center and enhanced facilities for soccer and track and field, helped bring support and excitement to our athletics programs. The addition of Duncan and McMurtry residential colleges, a new Sid Rich college and upgrades and expansions to several others have supported our student growth. Another college is in the planning stages. Graduate student housing has been greatly increased as well.

David established early the priority of engaging with the city of Houston and supporting its success, and Rice’s visibility in our home city has been transformed. David encouraged students to engage with the city through Passport to Houston and the creation of the Center for Civic Leadership. This support for Houston was further enhanced by the work of the Kinder Institute and the construction of the Ion, the midtown innovation hub opening soon in the surrounding innovation district being developed by Rice. Engagement by David and our amazing first lady Y. Ping Sun throughout the city, and with many major institutions, reinforced the relationship between Rice and Houston. David would be the first to say that Ping’s active and enthusiastic participation in so many projects and causes at Rice and in Houston contributed immensely to that relationship.

While meeting multiple challenges, Rice’s financial situation has remained extraordinarily strong. David initiated the Centennial campaign, which raised over $1 billion dollars, with sustained fundraising success since then. Rice maintains its Aaa bond rating, just one of eight private research universities to do so. The endowment now exceeds $7 billion, more than double the $3.3 billion value when David took over as president. Even as operating expenses grew from $334 million to nearly $800 million during the last 17 years, revenues kept pace and the budget was balanced or positive in every year except for two, including FY 2020 when the pandemic began and the national economy was in major downturn and a minor deficit many years earlier.

This past year was indeed a reflection of David’s leadership as the university navigated the pandemic with compassion, creativity and careful judgment, keeping the campus extraordinarily safe while continuing to foster our sense of community and fulfill our missions with high levels of success. We supported our employees and avoided furloughs thanks to that leadership.

Finally, let me thank David and Ping for their personal commitment to our students, faculty and staff. Their walks around campus and personal engagement with students and faculty are legendary, and they have traveled the nation and the world to connect with alumni and build relationships with other universities. They embody the Rice values David articulated with the eponymous acronym: Responsibility, Integrity, Community and Excellence.

As I began by saying, this note does not begin to capture the contributions and impact of President Leebron. David, we are excited about the year ahead under your leadership and expect more great things to come of it. On behalf of the Board of Trustees and the entire Rice community, we thank you and salute you.

A presidential search committee is being formed and I will write again soon with more information.

Chair, Rice University Board of Trustees