Leebron to step down from Rice presidency in June 2022 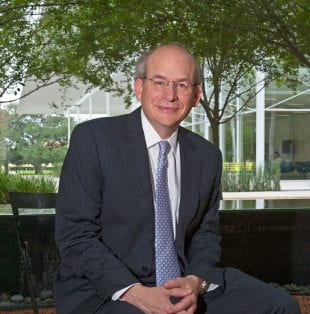 HOUSTON – (May 26, 2021) – Rice University President David Leebron has announced he plans to leave his position at the end of the next academic year after nearly two decades at the helm of one of the nation’s premier institutions of higher learning.

Leebron, who has overseen dramatic expansions of Rice’s facilities, student body and research initiatives since his arrival in 2004, will remain at the university through the 2021-2022 academic year. His departure from the presidency will become effective on June 30, 2022.

“Ping and I are so grateful for the opportunity we have had at Rice,” Leebron said. “This is a truly remarkable and dedicated community and it has been a privilege to be part of it.”

Trustees hailed Leebron’s tenure at Rice and thanked him for his leadership through an era of growth unprecedented in the university’s 109-year history.

“On behalf of the Board of Trustees, I want to express our deep appreciation and esteem for what David has done to transform our university while preserving its core values and community,” said Rob Ladd, chair of the board. “Over what will be an extraordinary 18 years of service, David has had the vision, courage and determination to improve almost every aspect of this university.”

Under Leebron’s leadership, Rice’s student body has become much larger. The student population has grown about 55% from 4,855 when he arrived in 2004 to about 7,500 in fall 2020, and by 2025 it’s expected to reach 9,000, an increase of about 85%. As the student body has expanded, it’s also become more diverse. Between 2004 and 2020, the number of domestic undergraduate students from underrepresented minority groups grew by almost 75%.

Affordability has also been greatly enhanced by Leebron’s 2018 launch of the Rice Investment, a generous and simplified financial aid program offering free and reduced tuition to students from low- and middle-income families.

As Rice’s reputation has grown around the globe, its enrollment has also become much more international, with about a quarter of all students coming from outside the U.S. Meanwhile, the number of students applying for admission has almost quadrupled from 8,100 in 2004 to almost 30,000 in 2021.

Rice’s physical campus has been transformed during Leebron’s tenure. The university is in the midst of completing a $1.8 billion capital improvement plan, including 29 new buildings, renovations and other construction projects, many of which are still underway. Among the buildings that have been constructed since 2004 are the BioScience Research Collaborative, the Oshman Engineering Design Kitchen, Kraft Hall for Social Sciences, the Moody Center for the Arts, Brockman Hall for Opera, the Brochstein Pavilion, three new residential colleges and the Gibbs Wellness and Recreation Center as well as a major renovation of the Tudor Fieldhouse. A new engineering and science building, an architecture building (Cannady Hall), the Sarofim Hall for visual arts and a dramatic new student center are in the design phase.

One of Leebron’s signature efforts has been to deepen Rice’s connection with its home city. His most recent strategic plan, the Vision for the Second Century, Second Decade, called for the university “to engage with and empower the success of the city of Houston.” He launched a “Passport to Houston” program encouraging students to become more community oriented, socially engaged and culturally aware. The Kinder Institute for Urban Research, the Texas Policy Lab, the SSPEED Center and other Rice institutions now routinely offer local civic and government leaders research and advice about a wide range of public policy matters. And Rice recently completed construction on The Ion, the centerpiece of an innovation district now under development in Houston’s Midtown area.

“I am proud of so many things that we’ve accomplished at Rice,” Leebron said. “But I’m especially proud of the community’s constant desire to provide greater opportunities and address the most important challenges facing our city, our country and our world.”

A Philadelphia native, Leebron is a graduate of Harvard College and Harvard Law School, where he was elected president of the Harvard Law Review. He began teaching at the UCLA School of Law in 1980, then entered legal practice and returned to teaching at the NYU School of Law in 1983. He joined the faculty of Columbia Law School in 1989, where he served as dean before taking the helm at Rice in 2004.

Leebron is only the seventh president in Rice’s history. His long tenure is second only to the university’s founding president, Edgar Odell Lovett, who held the post for 34 years.

“Let me thank David and his wife Ping for their personal commitment to our students, faculty and staff,” Ladd said. “Their walks around campus and personal engagement with students and faculty are legendary, and they have traveled the nation and the world to connect with alumni and build relationships with other universities. They embody the Rice values of Responsibility, Integrity, Community and Excellence.”

A search committee will be formed to find the university’s next president.