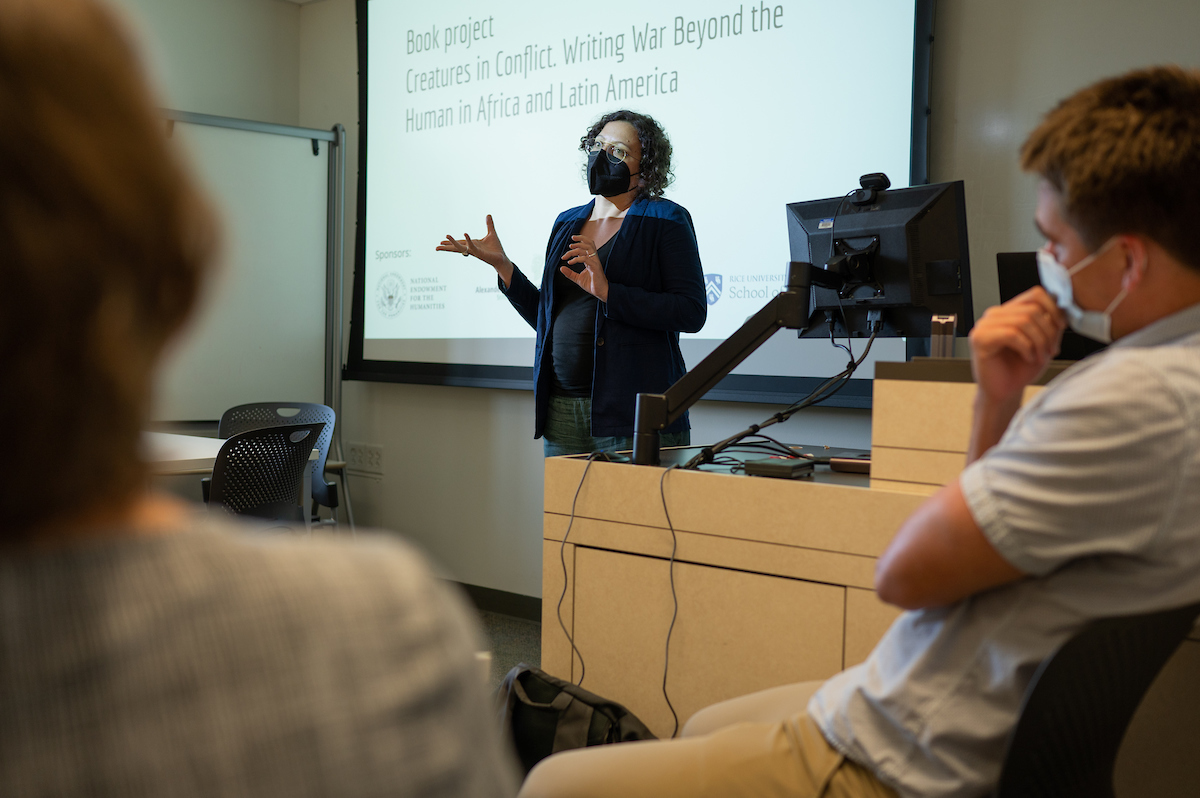 Over the years, Rice has developed a deep bench of Latin American and Latinx scholars producing important research and events across various departments and schools. But a larger institutional structure and framework for all of that scholarship would elevate it all to a different level. And that’s what Rice’s newly organized Initiative for the Study of LatinX America (ISLA) is aiming to do. 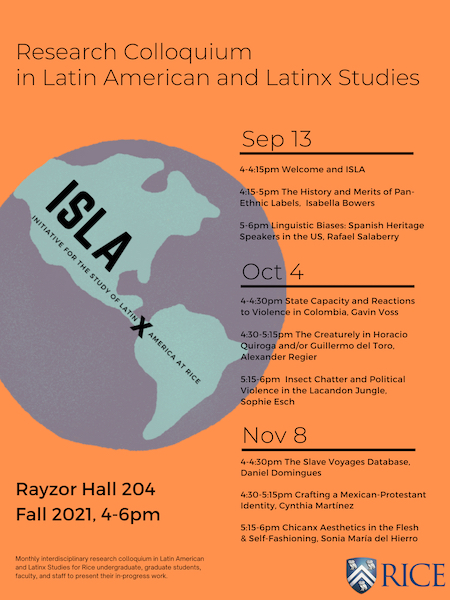 With a substantial lineup of colloquia, conferences and lectures planned for this semester and beyond, ISLA is already raising consciousness about the breadth of Latin American and Latinx scholarship and research at Rice. ISLA is not only bringing in high-profile speakers such as Amanda Ellis (Oct. 12) and Ana Celia Zentella (Oct. 21), but also creating platforms for faculty and students alike to share their research in broad venues open to all — including ISLA’s new Research Colloquium in Latin American and Latinx Studies, which meets monthly in Rayzor Hall.

Further evidence of the abundance of Latin American studies-related coursework and events can be seen in ISLA’s busy mailing list, which has no shortage of highlights to share: “Español y sobremesa” chats organized by the Center for Languages and Intercultural Communication and “Mesa de Português” meetups at Jones College; a history class on environment, medicine and public health in Latin America taught by Moramay López-Alonso; and a course tackling disability and illness in Latin American literature taught by Gisela Heffes.

The field has always transcended disciplines, touching everything from art history and anthropology to political science and literature. And right now at Rice, this still-growing group of scholars — all of them focused on Latin American, Caribbean and Latinx studies — has never been stronger.

“ISLA is about community-building, reaching out to people and bringing people together,” said Sophie Esch, associate professor of modern and classical literatures and cultures, who’s spearheading the initiative.

Esch is enthusiastic about using Rice’s intrinsic qualities and existing infrastructure as well as its Gulf Coast location to accomplish something remarkable with ISLA.

Rice is a highly collaborative, interdisciplinary and research-oriented university within a vast metropolitan area that boasts geographic proximity to Mexico, Central America and the Caribbean. Houston also has a diverse international and Hispanic population and, with 90 consulate offices, the third-largest consular corps in the U.S.

ISLA provides a way to harness these resources to the advantage of the university and its students — and a way to position Rice as a key venue for producing cutting-edge, contemporary Latin American, Caribbean and Latinx scholarship and research.

ISLA is about community-building, reaching out to people and bringing people together.

It also comes at a critical juncture in time when the definition of Latin American studies across academia is expanding and shifting to also include the Latinx population in the US and the many identities and controversies this term carries.

ISLA recognizes the importance of tackling these topics in Houston, home to the nation’s third-largest Hispanic population, and Texas more broadly, which is on track for Hispanics to represent a plurality as soon as next year. In fact, the U.S. population as a whole is diversifying faster than predicted, with people of Latin American descent accounting for half of that growth — in particular, Latinos who identify as more than one race.

“The negation of Blackness is an issue within Latinx and Latin American communities, for instance, as is the disavowal of indigeneity, so this new initiative and work is positioned where the field is right now in terms of having a strong focus on Blackness and indigeneity in addition to latinidad and hispanidad,” Esch said. “In our research and event programming, we also plan to tackle other urgent topics in Latin America, the Caribbean and the Gulf Coast from petromodernities to climate resilience, or the increased polarization of the public sphere.”

“This initiative is crucial for Rice generally, but it's also crucial for Rice in this very moment with regard to political developments in the U.S.,” said Christian Emden, the Frances Moody Newman Chair and Professor of German Studies and chair of the Department of Modern and Classical Literatures and Cultures (MCLC).

“Sophie has put together a grassroots approach to this that involves the students, that involves the future of the Latin American Studies program and that also involves faculty from across Rice, in particular, of course, the schools of Humanities and Social Sciences,” Emden said.

And as the field of Latin American studies evolves, ISLA expects to evolve too, bringing on more faculty from across a broad range of disciplines and finding new connections to make between fields.

“Ultimately, that's also important for the students, so they’re not siloed in a program,” Emden said. “Imagine you can take a course on public policy and trade relations with Central America but also another on narcoculture in literature, so you learn about the region from an interdisciplinary lens.”

“I am so impressed with the initiative and energy that ISLA represents,” said Dean of Humanities Kathleen Canning. “I am particularly pleased that from its founding, the program aims to connect disciplines and research arenas that have thus far remained largely separate. This approach will both advance research excellence and enrich the expanding curriculum in Latin American and Latinx Studies.”

Departments have been eager to pitch in and help host events, Emden said, such as the MCLC’s "New Directions in Latin and Latinx Studies" lecture series that starts Oct. 12 with the talk by the University of Houston’s Ellis on "Holistic Healing and the Curandera’s Perennial Return.” 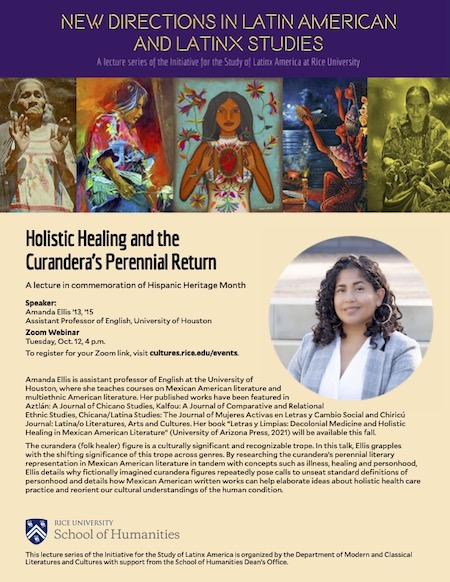 ISLA’s own Research Colloquium in Latin American and Latinx Studies, which kicked off Sept. 13 with a presentation on Spanglish and linguistic biases by Rafael Salaberry, has created an important public platform for students and faculty alike to present their humanities and social science research to a cross-disciplinary crowd. The next colloquium takes place Nov. 8 at 4 p.m.

“I jumped at the opportunity to participate in the colloquium,” said Salaberry, the Mary Gibbs Jones Professor of Humanities and professor of modern and classical literatures and cultures, who saw ISLA’s benefits firsthand during his presentation when he had a chance to interact with faculty outside his department.

“It's a way for us to get to know each other and what we do,” removed from the traditional silos but working within the greater context of Latin and Latinx America, Salaberry said.

Alexander Regier, professor of English, presented at the Oct. 4 colloquium. The support a platform like ISLA can provide drew him to join its steering committee alongside Esch and Emden as well as faculty from across a variety of departments: Alida Metcalf, the Harris Masterson Jr. Professor of History; Leslie Schwindt-Bayer, professor of political science; Fabiola López-Durán, associate professor of art history; and José Aranda, professor of English and Spanish, Portuguese and Latin American Studies.

It’s one thing to have fortuitous encounters with fellow faculty on campus, Regier said — the kind of chance meetings that often produce incredible interdisciplinary results. But it’s another to create a program that intentionally brings people together to produce this work.

“As someone who’s been wanting to integrate Latin American literature and even teaching in Spanish, I’m very excited that this is happening,” said Regier, who grew up speaking both Spanish and German at home and now teaches 18th- and 19th-century British literature. “It’s really going to open up different avenues for people.”

Moreover, Regier said, an initiative like ISLA reflects Rice’s geographic position and acknowledges the reality of much of our community: multicultural and multilingual, inherently working across borders and boundaries.

“This is a very timely and relevant sort of initiative,” Regier said. “It's something that matters, and that matters right now.”

In the years since the Latin American Initiative at the Baker Institute for Public Policy was established in 1996 and Rice President David Leebron began to prioritize the hiring of new faculty in that area upon his arrival in 2004, the number of Latin Americanists and scholars across the university has grown substantially.

“We have this rich content of Latin American courses already on the books between humanities and social sciences so there's no absence of coursework for students,” Aranda said. “Next up is hiring faculty who are taking on Latinx issues directly.”

In Canning’s view, the School of Humanities “has a genuine deficit in Latinx studies across each of our eight departments. We are eager to expand this field and excited that ISLA is building a long-needed foundation for innovative research and for a new and vibrant curriculum.”

In anthropology, Amarilys Estrella is teaching Black Decolonial Feminisms with a focus on the experiences of Black women throughout the Americas, with particular emphasis on Latin America and the Caribbean. In French studies, Jacqueline Couti is teaching Shakespeare in the Caribbean.

And in Hispanic Studies itself, there’s no shortage of interesting classes this semester, such as Beatriz González-Stephan’s Border Narratives. In the spring, Luis Duno-Gottberg will be offering a new course in Spanish, Gazing at Disasters: Visual Culture and Natural Disasters in Latin America and the Caribbean, while William Suárez-Potts will be offering a new course, Borderlands History.

And the Research Colloquium in Latin American and Latinx Studies is just one part of ISLA’s work in facilitating an exchange of ideas. A speaker series, "Defining Latinx in the U.S.: Language, Race and Ideology," kicks off Oct. 21 with a talk by Zentella, professor emerita at the University of California, San Diego: “Dime con quién hablas y te diré quién eres: Defining Latino Identities.”

And look for three conferences later this semester, starting with "Central American Literature as World Literature" Nov. 11-13. That virtual conference will be followed by “Path of Disaster(s): Narratives around Natural Catastrophes in the Americas/Circum-Caribbean” Nov. 19-20 at the Moody Center for the Arts and “Bound Away: Voyages of Enslavement in the Americas” Dec. 3-4 at the Moody Center and Museum of Fine Arts, Houston.

“The launch of ISLA makes clear that the humanities seek to learn from the world we inhabit: a more inclusive and connective program like this pursues new questions and fields of interdisciplinary inquiry while continuing to invest in our school’s disciplinary strengths,” Canning said.

Upcoming Latin American and Latinx events at Rice this fall:

Dec 8: "The Speaker, Not the Language, in the Study of Speakers in Contact," Ricardo Otheguy (City University of New York)

Oct 26: "Caravaneros: Tales from the Migrant Caravan,” a conversation with Douglas Oviedo, Honduran migrant, activist and artist living in Houston

Nov. 16 at 5 p.m. in the Rice Memorial Chapel: The Department of English presents “Machete,” a new poetry collection by Tomás Morín, associate professor of creative writing

Nov. 19-20: "Path of Disaster(s): Narratives around Natural Catastrophes in the Americas/Circum-Caribbean" conference at the Moody Center for the Arts

Dec 3-4: “Bound Away” conference at the Moody Center and Museum of Fine Arts, Houston