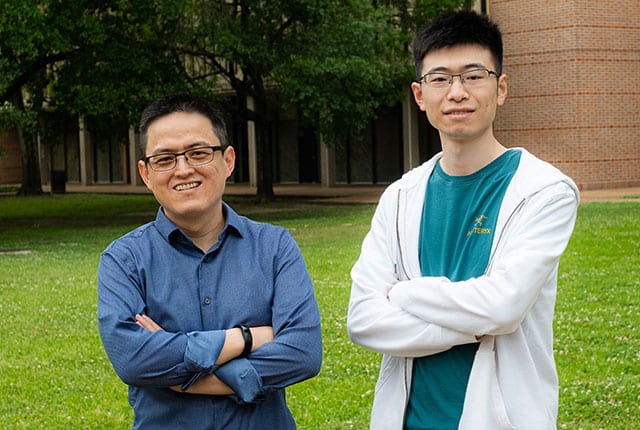 It's official: Hexagonal boron nitride (h-BN) is the iron man of 2D materials, so resistant to cracking that it defies a century-old theoretical description engineers still use to measure toughness.

"What we observed in this material is remarkable," said Rice University's Jun Lou, co-corresponding author of a Nature paper published this week. "Nobody expected to see this in 2D materials. That's why it's so exciting."

Lou explains the significance of the discovery by comparing the fracture toughness of h-BN with that of its better-known cousin graphene. Structurally, graphene and h-BN are nearly identical. In each, atoms are arranged in a flat lattice of interconnecting hexagons. In graphene, all the atoms are carbon, and in h-BN each hexagon contains three nitrogen and three boron atoms.

The carbon-carbon bonds in graphene are nature's strongest, which should make graphene the toughest stuff around. But there's a catch. If even a few atoms are out of place, graphene's performance can go from extraordinary to mediocre. And in the real world, no material is defect-free, Lou said, which is why fracture toughness — or resistance to crack growth — is so important in engineering: It describes exactly how much punishment a real-world material can withstand before failing.

In both graphene and hexagonal boron nitride (h-BN) atoms, atoms are arranged in a flat lattice of interconnecting hexagons. In graphene, all the atoms are carbon. In h-BN each hexagon contains three nitrogen and three boron atoms. (Image courtesy of Rice University)[/caption]

"We measured the fracture toughness of graphene seven years ago, and it's actually not very resistant to fracture," Lou said. "If you have a crack in the lattice, a small load will just break that material."

In a word, graphene is brittle. British engineer A.A. Griffith published a seminal theoretical study of fracture mechanics in 1921 that described the failure of brittle materials. Griffith's work described the relationship between the size of a crack in a material and the amount of force required to make the crack grow.

Lou's 2014 study showed graphene's fracture toughness could be explained by Griffith's time-tested criterion. Given h-BN's structural similarities to graphene, it also was expected to be brittle.

That isn't the case. Hexagonal boron nitride's fracture resistance is about 10 times higher than graphene's, and h-BN's behavior in fracture tests was so unexpected that it defied description with Griffith's formula. Showing precisely how it behaved and why took more than 1,000 hours of experiments in Lou's lab at Rice and equally painstaking theoretical work headed by co-corresponding author Huajian Gao at Nanyang Technological University (NTU) in Singapore. 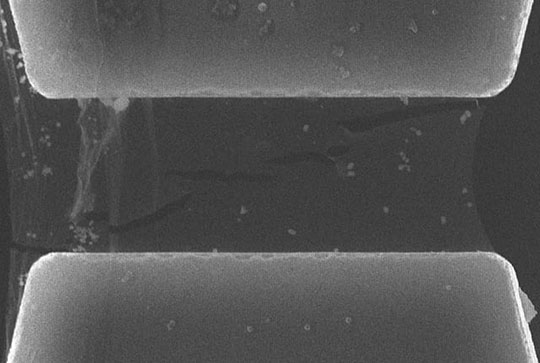 "What makes this work so exciting is that it unveils an intrinsic toughening mechanism in a supposedly perfectly brittle material," Gao said. "Apparently, even Griffith couldn't foresee such drastically different fracture behaviors in two brittle materials with similar atomic structures."

Lou, Gao and colleagues traced the wildly different material behaviors to slight asymmetries that result from h-BN containing two elements instead of one.

"Boron and nitrogen are not the same, so even though you have this hexagon, it is not exactly like the carbon hexagon (in graphene) because of this asymmetric arrangement," Lou said.

He said the details of the theoretical description are complex, but the upshot is cracks in h-BN have a tendency to branch and turn. In graphene, the tip of the crack travels straight through the material, opening bonds like a zipper. But the lattice asymmetry in h-BN creates a "bifurcation" where branches can form.

"If the crack is branched, that means it is turning," Lou said. "If you have this turning crack, it basically costs additional energy to drive the crack further. So you've effectively toughened your material by making it much harder for the crack to propagate."

Gao said, "The intrinsic lattice asymmetry endows h-BN with a permanent tendency for a moving crack to branch off its path, like a skier who has lost her or his ability to maintain a balanced posture to move straight forward."

Hexagonal boron nitride is already an extremely important material for 2D electronics and other applications because of its heat resistance, chemical stability and dielectric properties, which allow it to serve as both a supporting base and an insulating layer between electronic components. Lou said h-BN's surprising toughness could also make it the ideal option for adding tear resistance to flexible electronics made from 2D materials, which tend to be brittle.

"The niche area for 2D material-based electronics is the flexible device," Lou said.

"For this type of configuration, you need to ensure the material itself is mechanically robust when you bend it around," Lou said. "That h-BN is so fracture-resistant is great news for the 2D electronic community, because it can use this material as a very effective protective layer."

Gao said the findings may also point to a new route to fabricate tough mechanical metamaterials through engineered structural asymmetry.

"Under extreme loading, fracture may be inevitable, but its catastrophic effects can be mitigated through structural design," Gao said.

Rice-affiliated co-authors are Yingchao Yang, now an assistant professor at the University of Maine, Chao Wang, now at the Harbin Institute of Technology in China, and Boyu Zhang. Other co-authors include Bo Ni of Brown University; Xiaoyan Li of Tsinghua University in China; Guangyuan Lu, Qinghua Zhang, Lin Gu and Xiaoming Xie of the Chinese Academy of Sciences; and Zhigong Song of the Agency for Science, Technology and Research in Singapore and formerly of Tsinghua and Brown.

The research was supported by the Department of Energy, and simulations were performed on resources provided by the National Science Foundation's Extreme Science and Engineering Discovery Environment at Brown University's Center for Computation and Visualization.