Help may be at hand for hair-pulling

Rice students develop glove-based sensor for those with trichotillomania 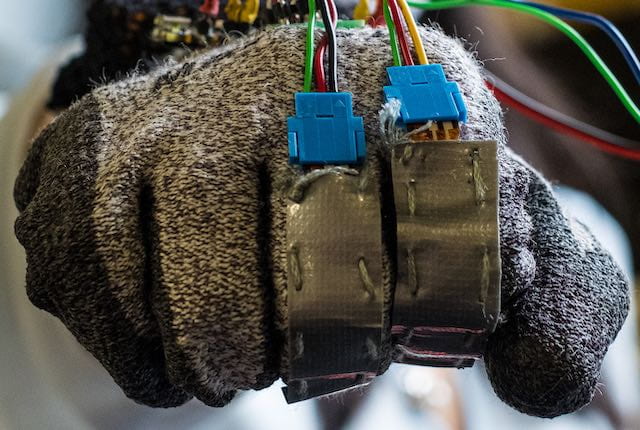 People who compulsively pull their hair – suffering from an affliction known as trichotillomania – could find relief with a device created by Rice University students.

Seniors at Rice’s Brown School of Engineering are developing a glove-based sensor that tracks hand motion and flexing, combined with a smartphone app that tracks behavior over time. The glove incorporates a flex and other sensors along with a gyroscope that sense when a hair-pull has happened. The glove sends data to the app, which keeps track of “no-pull” streaks.

“The reward for every week you don’t pull your hair could be monetary or something as simple as a congratulations on the app,” said Linda Liu.

The team was among dozens demonstrating their capstone projects, required of graduating seniors in engineering, at the school’s Engineering Design Showcase.

Trichotillomania is a mental disorder often considered among the obsessive compulsive and related disorders. Those with the disorder often remove hair to a noticeable, and even painful, degree.

“One of our challenges is that we need to get treatment even more effective,” Storch said. “We want to increase the awareness people have when they’re pulling their hair out in a more effective manner.

“The products out there now are great, but they fire without sensitivity or specificity,” he said. “You reach up and it goes off, so you learn pretty quickly to ignore it.”

The students would normally work at Rice’s Oshman Engineering Design Kitchen but gathered mostly online during the pandemic. Online resources also helped them get a sense of the real-world issues and how they could be addressed through browsing a Reddit feed dedicated to trichotillomania. “We saw that something just as easy as applause or awareness of your successes are things we can incorporate into the gamification side,” Liu said.

“Our Baylor sponsor had a system in mind that would use gamification as a model, providing rewards for users to condition them not to pull their hair,” she added.

Rice engineering student Zach Alvear tests the prototype glove developed to monitor the hand motions of people with trichotillomania, the compulsive pulling of hair, to help them modify their behavior. Photo by Jeff Fitlow[/caption]

With that knowledge, the team shifted its focus to technology that would provide accurate detection. Liu also noted motion-tracking wristbands currently marketed as devices for trichotillomania patients return “a lot of false positives.”

The team’s rough prototype is a regular work glove with sensors that run up the fingers and feed data to a microcontroller that communicates wirelessly to a phone app. “The glove allows us to have electrical tape, wires and everything attached to it and still function and feel comfortable,” Narendrula said.

“The sensors look at the flexing of fingers you’re going to use for pinching movements as well as your hand movements,” he said. “We know not only when you’re pulling your hair but also when you’re about to pull your hair. Having this information easily accessible to a patient is really where our device shines.”

They hope teams that pick up the project in future years will make the glove sleek -- and fashionable.

“It's not the prettiest design right now, since we’re still in the prototyping phase,” Liu said.

“We really want to focus on showing real results through identification of the motions,” Narendrula added. “But one of our suggestions for moving forward is to have a nice, well-designed glove with maybe an ounce of fashion. That’s outside our expertise, but with our current design, everything can be hidden inside the glove.”