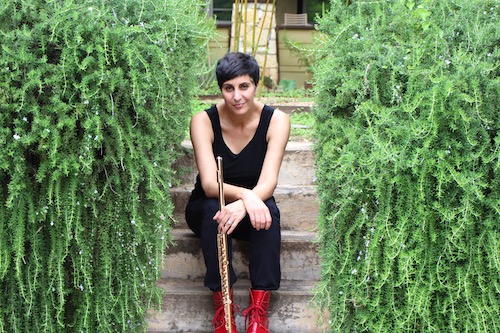 "For years I have admired the Shepherd School of Music's artist-educators for the depth and detail of instruction they offer to their uniquely talented students," Gedigian said. "It is with great enthusiasm that I look forward to joining Dean (Matthew) Loden and the esteemed faculty at Rice and the Shepherd School."

Gedigian is currently a professor of flute at the University of Texas at Austin's Butler School of Music. She holds a Butler Endowed Professorship in Flute and is a University Distinguished Teaching Professor. She received a bachelor's degree in flute performance from Boston University and also studied at the New England Conservatory of Music.

"I couldn't be happier to welcome Marianne to the Shepherd School," Loden said. “She is a true talent both onstage and in the teaching studio, and I have rarely seen such a compelling communicator. She’ll have a tremendous impact on our Shepherd School flute students, and I know Marianne will inspire all our music students to move from success to success.”

At the New England Conservatory, she studied under Leone Buyse, who eventually moved to the Shepherd School and has been the school’s professor of flute for 25 years. When Gedigian joined the University of Texas faculty in 2004, she and Buyse established an annual tradition of coaching each other’s students. The two will work alongside one another during the 2022-2023 academic year before Gedigian formally steps into her former teacher's role when Buyse retires at the school year's end.

"Leone is a source of inspiration as my mentor and in bridging the worlds of performer to artist-faculty. Our close collegial relationship will prove invaluable in facilitating a seamless transition for the students," Gedigian said. "It is a privilege to continue the lineage established by Leone and the faculty at this institution."

Buyse said she is "thrilled" to welcome her former student to Rice.

"She's an extremely perceptive musician, a virtuoso performer and an empathetic teacher with an uncanny ability to analyze problems and inspire solutions," Buyse said. "We have known each other since her days as a student in Boston, and it has been a great delight for me to follow the evolution of her career as an orchestral musician, soloist, chamber music player and professor."

Prior to her tenure at the University of Texas, Gedigian was on the faculty at Boston University and the Boston Conservatory. A dedicated music educator, she has presented recitals, concerts and master classes at numerous universities, conservatories and festivals across the U.S. and in Australia, Austria, Canada, China, England, Italy and Japan.

Her solo performances have taken her around the world, including recitals in Australia, Armenia, Canada, China, Japan and throughout Europe. She has appeared numerous times as a concerto soloist with the Boston Pops Orchestra and with the Armenian Philharmonic performing her own transcription for flute of the Khachaturian Violin Concerto.

Gedigian has performed on several John Williams movie scores, including "Saving Private Ryan" and "Schindler’s List," and can be seen in the film "Blown Away." She also has numerous solo and orchestral recordings to her credit on major labels including Naxos, Philips and Deutsche Grammophon. Other notable achievements include first prize in the James Pappoutsakis Memorial Flute Competition and the National Flute Association’s Young Artist Competition.

She is a founding member of the Boston-based Walden Chamber Players and was formerly a member of the Dorian Wind Quintet, one of chamber music’s preeminent and longest continuously active ensembles. She has appeared at numerous summer festivals including Brevard Music Center, ARIA International Summer Academy, Round Top International Music Festival, the Tanglewood Music Center and the Boston University Tanglewood Institute.

Buyse said working with Gedigian to ensure a smooth transition in the flute studio during the 2022-2023 academic year will feel natural, and that the students will be in excellent hands with her former student.

"I’m deeply grateful to the search committee for their dedicated work over the past six months, and I look forward to witnessing the flute studio thrive under Marianne Gedigian's guidance," she said.

More information on the Shepherd School of Music is available online at https://music.rice.edu