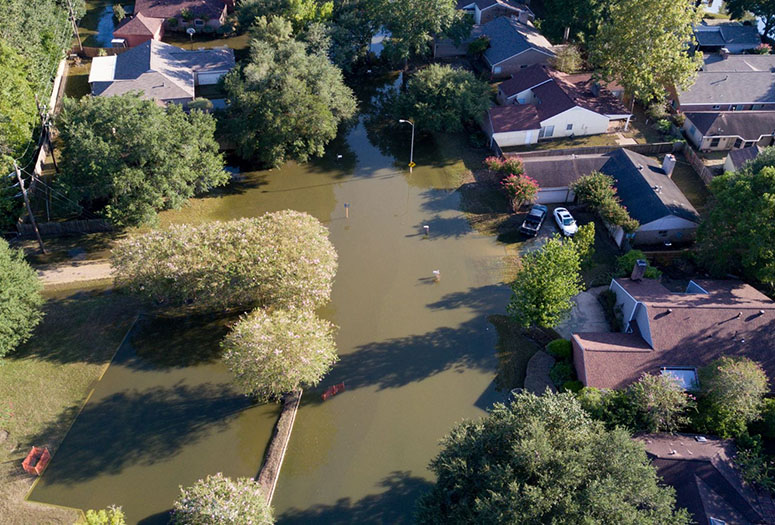 HOUSTON – (June 29, 2021) – A government policy that removes homeowners from flood-prone areas disproportionately disrupts the lives of residents from less white and affluent neighborhoods, according to new research from sociologists at Rice University and Temple University.

The researchers tracked more than 1,500 Houstonians who voluntarily sold their homes to the local flood authority for demolition and resettlement from 2000 to 2017, just before Hurricane Harvey ravaged the area. James Elliott, professor and chair of sociology at Rice University; Kevin Loughran, an assistant professor of sociology at Temple University; and Phylicia Lee Brown, a graduate fellow at Rice, are the authors of "Divergent Residential Pathways from Flood-prone Areas: How Neighborhood Inequalities Are Shaping Urban Climate Adaptation," which was recently accepted for publication in the journal Social Problems.

“Spurred by growing numbers of buyouts now underway, we wanted to see if the same federally funded policy leads to different types of relocation from different types of flood-prone neighborhoods,” Elliott said. “We weren't just interested in how far people move, we also wanted to know how far they end up from each other, two key indicators of community attachment that aid social resilience to future disasters.”

The approach known as managed retreat — funded through programs such as the Federal Emergency Management Agency’s Hazard Mitigation Grant Program — pays owners a fair market price for their homes and then demolishes the flood prone housing, leaving the homeowners and renters to resettle elsewhere. This strategy, now adopted by more than 500 municipalities, is touted as a cost-effective way to reduce urban flood risks while also helping to prevent the National Flood Insurance Program from sinking further into debt.

However, when the researchers analyzed data from Harris County — the central county of the Houston metro area and a national leader in managed retreat in terms of overall numbers — they found a clear pattern: Homeowners are more likely to resettle nearby and near each other when they come from neighborhoods that have higher home prices and higher proportions of white residents.

“Having longtime neighbors live close by after a move can help individuals maintain one of the support systems that makes life easier as well as more rewarding,” Loughran said. “We found this is happening for homeowners in more privileged flood-prone neighborhoods, but not others.”

“This ‘social capital’ is an important part of the noneconomic value of home,” Brown said. “Neighborly bonds built over time can help with daily needs such as errands and child care; they can also help with community resilience when residents have to prepare for and rebound from the next disaster.”

If these practices continue, they could create a new form of environmental injustice — one that arises as much from policy design and implementation as from growing flood risks.

“These findings give us a better of understanding of how people are affected by these types of relocation,” Elliott said. “Although current policy is grounded in good intentions and can potentially save money when it comes to disaster recovery, there’s substantial social cost passed on to historically marginalized communities.”

A pre-print copy of the paper is available online at https://bit.ly/35SiuLb.