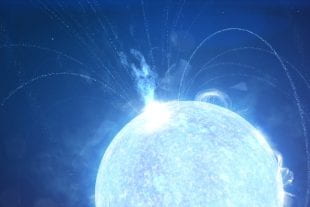 HOUSTON – (Jan. 13, 2021) – An intense flash of light from an erupting neutron star in a nearby galaxy in April 2020 has given astronomers their first clear look at a type of gamma-ray burst known as a magnetar giant flare and could set the stage for astronomers to observe gravitational waves from future giant flares in our galaxy.

Numerous space-based instruments, including NASA's Fermi Gamma-ray Space Telescope, measured a brief burst of high-frequency light that swept through the solar system April 15. The gamma-rays were analyzed by multiple teams of scientists who are reporting their findings today in the journals Nature and Nature Astronomy, and imminently in The Astrophysical Journal Letters.

"Giant flares start with an intense flash that lasts about a tenth of a second, and for that brief instant, the amount of energy they release in gamma-rays is about 10 trillion to 100 trillion times the energy of the optical light from our sun," said astrophysicist Matthew Baring, a professor of physics and astronomy at Rice University and co-corresponding author of the Nature study.

Gamma rays are the highest energy form of light, and bursts of gamma rays are detected almost daily by Fermi and similar satellites. But gamma-ray bursts come in different flavors. Most are caused by the death of exploding stars or the merger of binary neutron stars millions or billions of light years from Earth. Giant flares are much rarer events, and result from magnetic eruptions on special neutrons stars called magnetars. The energy released by such eruptions is millions of times less than the energy released in classical gamma-ray bursts from dying stars, but in each of the three previously recorded giant flares in the Milky Way and a nearby galaxy, the initial flash of light was so intense that it temporarily partially disabled scientific instruments.

"When giant flares are close by, their initial burst of radiation saturates the instruments and basically blinds them so they cannot do things like measure the spectrum very easily," Baring explained. "This was an impediment, both to early missions in 1979 and to much more sophisticated missions in 1998 and 2004."

The 1979 flare came from the Large Magellanic Cloud, a smaller galaxy about 160,000 light years from the Milky Way, and the flares measured in 1998 and 2004 were even closer to Earth, coming from two magnetars in our galaxy.

"The 2020 event was associated with the Sculptor Galaxy, NGC 253, about 50-60 times more distant than the 1979 event," Baring said. "Even though it was intrinsically really bright, it was far enough away that our instrument, the Fermi Gamma Ray Burst Monitor, got a very good look, a view that we have never had before of that first initial flash from a giant flare."

Baring, who lead the interpretation and modeling aspects of the Nature study, said the spectroscopic data revealed a wealth of information about the magnetic eruption that caused the flare.

"The event had a lot of high-frequency photons with energies around 1 million electron volts, energies far greater than those of persistent X-ray light at around 2,000 electron volts, which is typically emitted from the surface of magnetars," Baring said. "We view this as a very clear signature of a giant flare."

The highest-energy light, around 3 million electron volts "tells us that the plasma must be moving relativistically and emitting in an extended region, at the scale of perhaps 100 times the radius of the neutron star," he said. "And the only way it can easily do that is for the radiating plasma to be above the magnetic pole of the star."

Measuring just a few miles in diameter, neutron stars contain the entire mass of a collapsed star compressed so tightly by gravity that it consists mainly of neutrons packed as densely as they would be inside the nucleus of a single atom. Because neutron stars spin rapidly and all their magnetically active protons and electrons are in their outer few centimeters of crust, they produce intense magnetic fields. Magnetars feature the most intense magnetic fields in the universe — about a million billion times stronger than Earth's — and like all celestial bodies possessing magnetic fields, they feature poles where field lines rise up and away from star.

"Imagine this star is a bar magnet that's tilted and spinning," Baring said. "The rotating poles behave like revolving beacons on a lighthouse. If you're on a boat, the lighthouse is visible as periodic, bright flashes of light, and that's what we think is going on here. The magnetar is like a transient relativistic lighthouse, and when the 'one-off' flare goes out from the poles, we see it ephemerally and then it's gone in a flash."

Spectroscopic data from the April 15 giant flare will allow physicists to test theoretical models of magnetars that haven't previously been verifiable and could lead to a fuller understanding of not only magnetars, but of the ways intense magnetic fields influence fundamental aspects of quantum mechanics.

"What we learn could have an impact, for example, on how we deliver quantum field theory in the early universe, how we adapt it to conditions in first few seconds of the universe."

He noted that one of the group's primary goals is developing models that precisely measure the total energy output of a giant flare.

"If we measure the energy, we know pretty much how deep the magnetic field penetrates into the stellar crust, because we know roughly what its strength is," he said. "We know these stars are not exactly spherical. Their rotation and the magnetic field distorts them a little. Alterations to the magnetic field that accompany giant flares should change this stellar distortion abruptly so that magnetar giant flares will likely be accompanied by powerful gravitational wave emissions; with the information from our models we think the Advanced LIGO gravitational wave detector will be able to measure them.

"We've not had a galactic giant flare since 2004 and we're overdue," Baring stated. "When the next one occurs, ideally we will have the Advanced LIGO and VIRGO, it's Italian equivalent, available to look for gravitational waves, and we will have the X-ray and gamma-ray observatories used on these papers to get a very, very good look at it, propelling our understanding of what is going on."

The research was supported by NASA.

0113_MAGNETAR-bar2a-lg.jpg
CAPTION: Matthew Baring is a professor of physics and astronomy at Rice University. (Photo by Henry Baring, Lovett Class of 2020)

https://youtu.be/YW4CKP_w4_0
DESCRIPTION: On April 15, 2020 a burst of high-frequency light swept through the solar system, triggering detectors on spacecraft orbiting Earth and Mars. The light was produced by a giant flare from a magnetar, relatively rare events that had been observed only three previous times. Matthew Baring, co-author of a January 2021 Nature study of the flare, said instruments aboard NASA's Fermi Gamma-ray Space Telescope and other spacecraft gave scientists an unprecedented view of the flare and critical data for understanding their origins. (Video by Brandon Martin/Rice University)

https://youtu.be/yXYvhYXBeP0
DESCRIPTION: On April 15, a wave of X-rays and gamma rays lasting only a fraction of a second across the solar system, triggering detectors on NASA and European spacecraft. The event was a giant flare from a magnetar, a type of city-sized stellar remnant that boasts the strongest magnetic fields known. Watch to learn more. (Video by NASA's Goddard Space Flight Center)