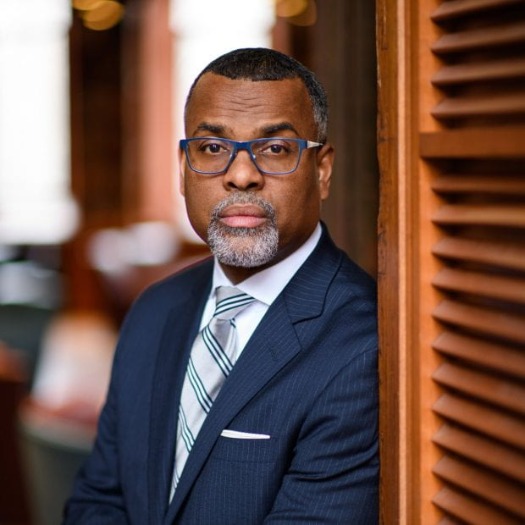 The stories Americans tell about themselves have long obscured the horrors of what we’ve done in the past, argued Eddie S. Glaude Jr. during the March 4 Campbell Lecture on Racial Justice. Just look to the tales of cowboys and Indians that idealized American frontier life, devalued Native American life and captivated national audiences for generations.

These stories also serve to promote our own blamelessness and righteousness in matters of history and policy — and, just as often, that Reagan-era notion of America as the biblical “shining city on a hill.” But they’re not just peddling nostalgia and dishonest history, Glaude said. They’re actively harming our nation: Just look, he said, to the insurrection at the U.S. Capitol on Jan. 6.

“We have too long told ourselves a story that secures our virtue and protects us from our vices, but today we confront the ugliness of who we are: We are in a kind of cold civil war,” said Glaude, a Princeton University professor and prolific public commentator, in a talk delivered via Zoom on “The Stakes of Racial Justice and the Future of American Democracy.”

“Millions of Americans feel that the country has turned its back on them — that the browning of the country, the browning of America, represents a distinct decline — and some among them decided to sack the Capitol because they believe the election was stolen; they believe that only white votes matter,” Glaude said. “Jan. 6, then, was fueled by white resentment, white grievance and white fear — and I know I'm speaking at a certain level of generality, but I think you get the point. It was a moment when the cold war turned hot.”

Although it may be hard for some to admit, he said, the American ideal is in trouble. Indeed, it has been from the moment of its conception. And this is because our stories have long aimed to conceal the contradiction at the center of American democracy, Glaude said: that of white supremacy.

“America's original sin is the belief that white people matter more than others,” Glaude said. “We've witnessed the monstrous consequences of what follows from this view, in terms of our dispositions and our practices, and we're witnessing it in real time right now. This country stands on a knife's edge.”

Many political theorists argue that America wasn’t a genuine democracy until the 1965 passage of the Voting Rights Act, which finally banned tactics used to disenfranchise Black voters. Just like today, this era of civil rights progress was met with violent resistance.

“What did we get in response to Dr. King and all of those unsung heroes and heroines who risked their lives? We got the election of Richard Nixon twice — twice,” Glaude said. “We got calls for ‘law and order.’ We saw people put in place the building blocks of what would become the carceral state. We got the tax revolt in California, which laid the foundation of the shredding of the social safety net and the undoing of the basic framework of the New Deal. And by 1980, we get the election of Ronald Reagan — who for many Black Panther activists was as notorious as George Wallace.”

Reagan too, he noted, promised to “make America great again.”

But every time a new version of America is about to be born, Glaude said, “the umbilical cord of white supremacy has wrapped around its neck and choked the life out of it.”

History is an inheritance, Glaude said, and anyone looking can see echoes of white supremacy in every reaction to progress undertaken by our nation.

Enslaved people would be freed following the Civil War, but the U.S. ratified the 13th Amendment immediately afterward in 1865, essentially creating a legalized form of slavery in the convict leasing system that would later help build American cities. Frederick Douglass, the abolitionist and writer who escaped enslavement in Maryland, fought successfully for emancipation during the Civil War yet witnessed the dawn of Jim Crow legislation — laws that legalized segregation and criminalized being Black.

And historians have long noted two huge spikes in the construction of Confederate statues and monuments: once in the segregation era of the early 1900s, which saw the founding of such institutions as the National Association for the Advancement of Colored People, and once more in the “second reconstruction” era of the 1950s and ‘60s. Both time periods were marked by extreme tension due to civil rights progress in America.

“We've been here before,” Glaude said. “In these moments of trouble, when we have a chance to imagine America anew, in these moments when the contradiction seizes the American heart, we have witnessed over and over again the reassertion of the value gap and the lies that provide it cover.”

This means shedding sentimentality, for one — that pernicious form of nostalgia which James Baldwin famously called “the mask of cruelty.” And it means understanding democracy as more than procedure, more than a presidential election.

Glaude related a story told to him by Bob Moses, the activist best known for organizing sit-ins and voter registration drives as a young member of the Student Nonviolent Coordinating Committee (SNCC) in the 1960s. The revolutionary power of the SNCC was not only in its efforts to dismantle Jim Crow laws, Moses insisted, but in the people they brought into the voting process.

“Those illiterate Black sharecroppers brought with them ... a wealth of experiences that shaped the demands of the state and formed their embrace of democratic ideals, and expanded, if only for a moment, a very understanding of who we take ourselves to be as a nation,” Glaude said.

Moses, he said, understood that genuine moral democracy called for the freely cooperative participation of all concerned.

Before long, tending to Americans and caring for your fellow citizen is tied up in the entire act of engaging in democracy. This is a new story we could tell ourselves, perhaps.

“Imagination as an act of sympathy is central to the politics of tending, and it opens us up to the wounds and joys of others, enables habit formation that affirms the dignity of our fellows and encourages a willingness to embrace those receptive practices of listening and of being still as critical features of a mode of democratic study,” Glaude said. “You can't do this when you think some people are valued more than others.”

Let us imagine a country in which we fully recognize each others' humanity. Let our combined imagination be, as Percy Shelley put it, our chief instrument for doing good. The future of America depends on doing this by tending to each other, Glaude said.

“And that means, in my view, committing ourselves to building a country close to the ground that affirms the dignity and security of every human being, no matter the color of their skin, their ZIP code, where they're from, who they love, their gender or their abilities,” he said. “In order for this to happen, Americans will have to tell themselves the truth about our failures and we will have to take the risk to do something bold and visionary.”

Right now, that something bold means more than reimagining a way of being together and learning how to properly tend to one another, he said. It also means taking that ultimate risk of telling the truth.

“True freedom, for all Americans, requires that we confront the ghosts of our past directly, because they haunt us still,” Glaude said.