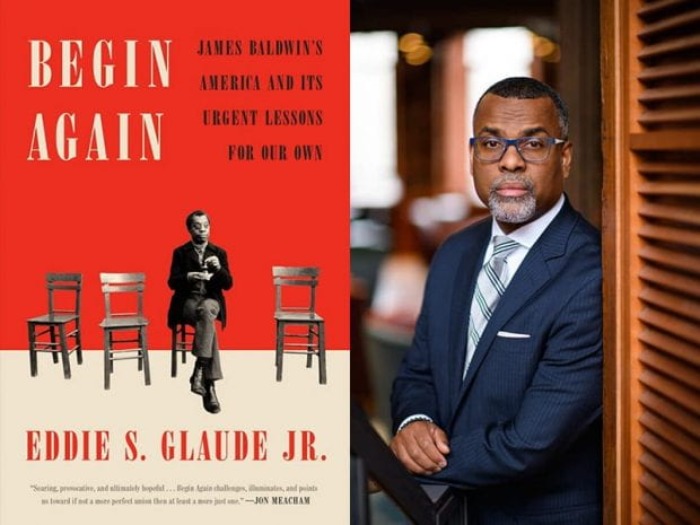 When Eddie Glaude Jr., the James S. McDonnell Distinguished University Professor and chair of the Department of African American Studies at Princeton University, appeared on “The Daily Show with Trevor Noah” last summer to discuss his newest book — a treatise on writer James Baldwin’s later work — it epitomized the insightful, engaging rhetoric that has made Glaude such a compelling and in-demand public speaker.

“Once we’ve told the truth about what we’ve done and who we are, then we can free ourselves into imagining a different world and imagining ourselves differently,” Glaude told Noah. “Here we are in a moment of moral reckoning, where the country can be otherwise, but every single time we try to give birth to a new nation, the umbilical cord of white supremacy is wrapped around its neck.”

Glaude will be the featured speaker March 4 at the Campbell Lecture on Racial Justice in a talk titled “The Stakes of Racial Justice and the Future of American Democracy.” The lecture, which will take place at 4 p.m. via Zoom, was organized by the Dean of Humanities Office and funded by the Campbell Family Foundation’s Lecture Endowment.

“We are so excited that we were able to enlist Professor Eddie Glaude, eminent scholar of African American history and religion and prominent critic and C-SPAN and MSNBC commentator on racial justice, for this special Campbell Lecture on Racial Justice,” said Dean of Humanities Kathleen Canning.

In addition to writing such bestselling books as “Democracy in Black: How Race Still Enslaves the American Soul,” Glaude has also written for the New York Times and Time magazine. His latest piece for Time, “We Can Make America Anew Only If We're Honest About the Depth of the Ugliness and Hate Today,” tackles the same through line present in much of Glaude’s work: the necessity of addressing and rooting out white supremacy in order to heal our nation.

“(Glaude) is extremely thoughtful and engaged,” said Anthony Pinn, the Agnes Cullen Arnold Professor of Humanities and director of Rice’s Center for African and African American Studies. Pinn, who’s known and worked with Glaude for decades, extolls him as an exemplar of “the Morehouse man.”

“He's able to isolate the moment and speak to it in a way that captures the attention of an academic audience and a popular audience,” Pinn said. “There's a passion to what he does that is hard to deny. You see something of him reflected in his conversation. This isn't just objective reporting — he feels what he's saying.”

In addition to his work on race and American politics, Glaude is the former president of the American Academy of Religion and has written widely on religion and philosophy, including the book “Exodus! Religion, Race and Nation in Early 19th Century Black America,” which was awarded the Modern Language Association’s William Sanders Scarborough Prize. His most recent book, “Begin Again: James Baldwin’s America and Its Urgent Lessons for Our Own,” was released in June.

COVID-19 compelled a postponement of Rice’s regular Campbell Lecture Series, which typically takes the format of three evening lectures each fall, but Canning knew it was important to continue the series’ tradition of bringing big-name intellectuals to discuss highly topical issues.

“We approached the Campbell Family Foundation to discuss possible options for an online single Campbell Lecture this year,” Canning said. “The Campbells responded enthusiastically to our suggestion that an individual lecture might focus this year on racial justice, as the lectures aim both to feature the cutting-edge work of leading scholars and artists and to address compelling issues in the world from the perspective of the humanities and the arts.”

Amitav Ghosh, prize-winning novelist and author of the new book “Gun Island,” will headline the next Campbell Lecture Series this fall. The series is scheduled to return to its three-evening format Sept. 14-16.

Glaude’s March 4 lecture is free and open to the public. Registration is required. For additional information, visit campbell.rice.edu.