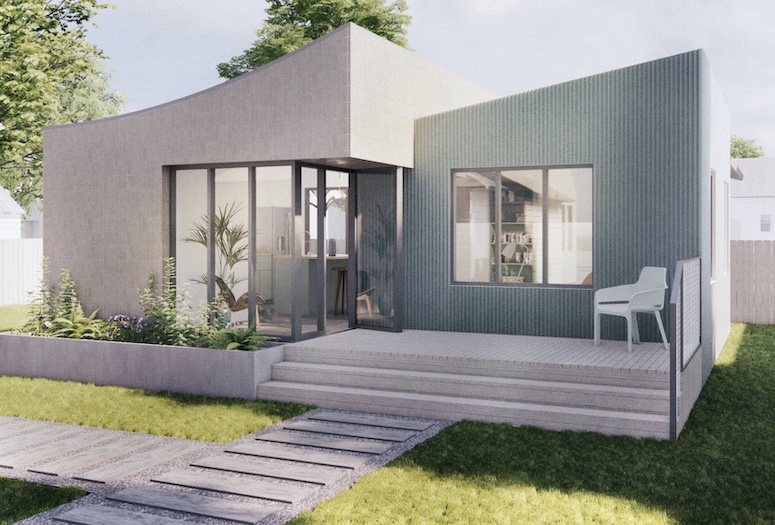 A small “accessory” residence designed by two Rice Architecture students will help eliminate the guesswork for Houstonians who want to build one on the same lot with an existing home.

“Adam and Siobhan went above and beyond, giving a detailed view of just how functional and elegant an ADU can be,” said Houston Planning Department Director Margaret Wallace Brown. “When the city shares these plans with the public, their design will help eliminate the guesswork for homeowners who choose to build their own ADU.”

The schematics for Finlay and Berman's “Double House” will be not only freely available, but also pre-approved for construction with minimal permitting in neighborhoods where deed restrictions allow ADUs.

The competition required entries to comply with Houston building code and development standards. Double House was the top choice of 400 online voters. It contains 530 square feet of living space in a pair of rectangular modules topped with a stylized curved roof. A digital ADU design book of all qualified entries will be published online by the end of the year, according to the Houston Planning and Development Department. Actual construction plans will be available online next year.

Along with their newfound fame, Finlay and Berman received a bit of fortune with a $3,000 award provided through an AARP Community Challenge Grant to the city.

Finlay believes the short notice to come up with a basic design in the first weeks of Andrew Colopy’s Totalization studio turned out to be an advantage. “I was nervous on the first day when he said, ‘OK, this competition is due in three weeks, and you’re all going to submit for it,’” she recalled. “It was a very quick timeline but it helped us really jumpstart ideas.”

“Because we could change our projects for the rest of the semester after the competition was due, it didn’t feel like a lot of pressure,” Berman added.

“Competitions can be a valuable means of public engagement and a productive way to generate ideas in short order,” said Colopy, an associate professor of architecture and co-director of Rice Architecture’s Construct, which works with the Houston community to design and build projects. “In the context of the studio, those ideas were able to form the basis for a sustained and more detailed investigation, reflecting the nature of architectural practice.”

“Andrew asked us after the first class to come in with a very simple idea of what we’d like to do, and we all presented,” Finlay said. “Then based on that, we picked partners. I felt like there were a lot of similarities between my ideas and Adam’s; we were both interested in doing something with a curve and something with a more unique roofline.”

What they called the design’s “sliding rectangles” put living space in one and a bedroom in the other, with outdoor patio space on two corners. The curved elements “created a softer environment on the inside,” Berman said.

Colopy’s studio produced three other ADU projects recognized by the city, which named winners in six categories. The winner in the Sustainable category was the Auxiliary ADU, a “dogtrot” dwelling designed in a previous class by Rice alumna Kati Gullick and Madeleine Pelze. Construct chose that project to move forward and it’s now nearing the end of construction in Houston’s First Ward.

The others are products of current students. The “Wedge House” by Nell El Souri, Alida Fabrega and Henry Taibi won in the Detached category, and “Housey House” by Maggie Martin and Michelle Schneider was chosen as best Affordable ADU.

“Rice Architecture Construct takes community outreach to a whole new level,” said Igor Marjanović, the William Ward Watkin Dean and a professor of architecture at Rice. “Through a combination of collaboration, experimentation and construction, the program not only situates architectural research within the larger world, it also moves Houston forward by creating more beautiful, resilient and livable structures.”

“Congratulations to Adam and Siobhan on winning the public vote, but more importantly, thank you for creating a design that can have a lasting impact on housing options in our city,” Mayor Sylvester Turner said.