'Cool' kids in the cosmos may not be so unique 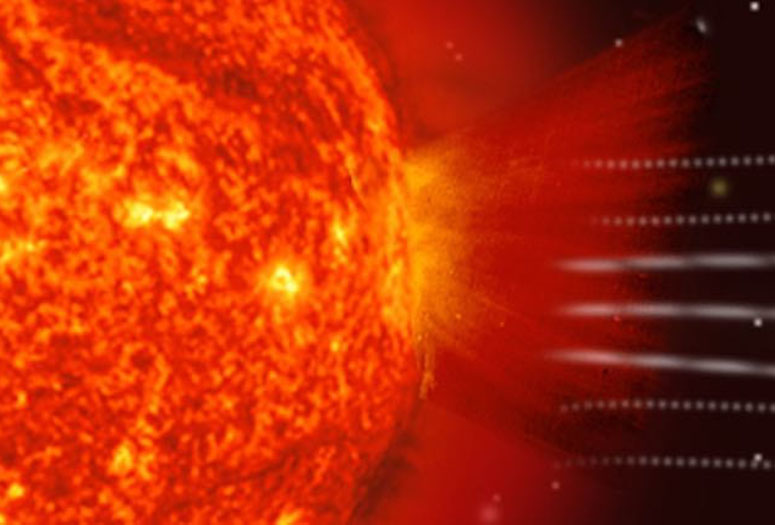 HOUSTON – (Aug. 9, 2021) – Stars scattered throughout the cosmos look different, but they may be more alike than once thought, according to Rice University researchers.

New modeling work by Rice scientists shows that "cool" stars like the sun share the dynamic surface behaviors that influence their energetic and magnetic environments. This stellar magnetic activity is key to whether a given star hosts planets that could support life.

The work by Rice postdoctoral researcher Alison Farrish and astrophysicists David Alexander and Christopher Johns-Krull appears in a published study in The Astrophysical Journal. The research links the rotation of cool stars with the behavior of their surface magnetic flux, which in turn drives the star's coronal X-ray luminosity, in a way that could help predict how magnetic activity affects any exoplanets in their systems.

The study follows another led by Farrish and Alexander that showed a star's space "weather" may make planets in their "Goldilocks zone" uninhabitable.

"All stars spin down over their lifetimes as they shed angular momentum, and they get less active as a result," Farrish said. "We think the sun in the past was more active and that might have affected the early atmospheric chemistry of Earth. So thinking about how the higher energy emissions from stars change over long timescales is pretty important to exoplanet studies."

"More broadly, we're taking models that were developed for the sun and seeing how well they adapt to stars," said Johns-Krull.

The researchers set out to model what far-flung stars are like based on the limited data available. The spin and flux of some stars have been determined, along with their classification -- types F, G, K and M -- which gave information about their sizes and temperatures.

They compared the properties of the sun, a G-type star, through its Rossby number, a measure of stellar activity that combines its speed of rotation with its subsurface fluid flows that influence the distribution of magnetic flux on a star's surface, with what they knew of other cool stars. Their models suggest that each star's "space weather" works in much the same way, influencing conditions on their respective planets.

"The study suggests that stars -- at least cool stars -- are not too dissimilar from each other," Alexander said. "From our perspective, Alison's model can be applied without fear or favor when we look at exoplanets around M or F or K stars, as well, of course, as other G stars.

"It also suggests something much more interesting for established stellar physics, that the process by which a magnetic field is generated may be quite similar in all cool stars. That's a bit of a surprise," he said. This could include stars that, unlike the sun, are convective down to their cores.

"All stars like the sun fuse hydrogen and helium in their cores and that energy is first carried in the radiation of photons toward the surface," Johns-Krull said. "But it hits a zone about 60% to 70% of the way that's just too opaque, so it starts to undergo convection. Hot matter moves from below, the energy radiates away, and the cooler matter falls back down.

"But stars with less than a third of the mass of the sun don't have a radiative zone; they're convective everywhere," he said. "A lot of ideas about how stars generate a magnetic field rely on there being a boundary between the radiative and the convection zones, so you would expect stars that don't have that boundary to behave differently. This paper shows that in many ways, they behave just like the sun, once you adjust for their own peculiarities."

Farrish, who recently earned her doctorate at Rice and begins a postdoctoral research assignment at NASA's Goddard Space Flight Center soon, noted the model applies only to unsaturated stars.

"Conversely, the sun is in the unsaturated regime, where we do see a correlation between magnetic activity and energetic emission," she said. "That happens at a more moderate activity level, and those stars are of interest because they might provide more hospitable environments for planets."

"The bottom line is the observations, which span four spectral types including both fully and partially convective stars, can be reasonably well represented by a model generated from the sun," Alexander said. "It also reinforces the idea that even though a star that is 30 times more active than the sun may not be a G-class star, it's still captured by the analysis that Alison has done".

"We do have to be clear that we're not simulating any specific star or system," he said. "We are saying that statistically, the magnetic behavior of a typical M star with a typical Rossby number behaves in a similar fashion to that of the sun which allows us to assess its potential impact on its planets."

A critical wild card is a star's activity cycle, which can't be incorporated into the models without years of observation. (The sun's cycle is 11 years, evidenced by sunspot activity when its magnetic field lines are most distorted.)

Johns-Krull said the model will still be useful in many ways. "One of my areas of interest is studying very young stars, many of which are, like low-mass stars, fully convective," he said. "Many of these have disc material around them and are still forming planets. How they interact is mediated, we think, by the stellar magnetic field.

"So, Alison's modeling work can be used to learn about the large-scale structure of very magnetically active stars, and that can then allow us to test some ideas about how these young stars and their disks interact."

Department of Physics and Astronomy: https://physics.rice.edu

https://news-network.rice.edu/news/files/2021/07/0726_STARS-1-WEB.jpg
CAPTION: Rice University scientists have shown that "cool" stars like the sun share dynamic surface behaviors that influence their energetic and magnetic environments. Stellar magnetic activity is key to whether a given star can host planets that support life. (Credit: NASA)