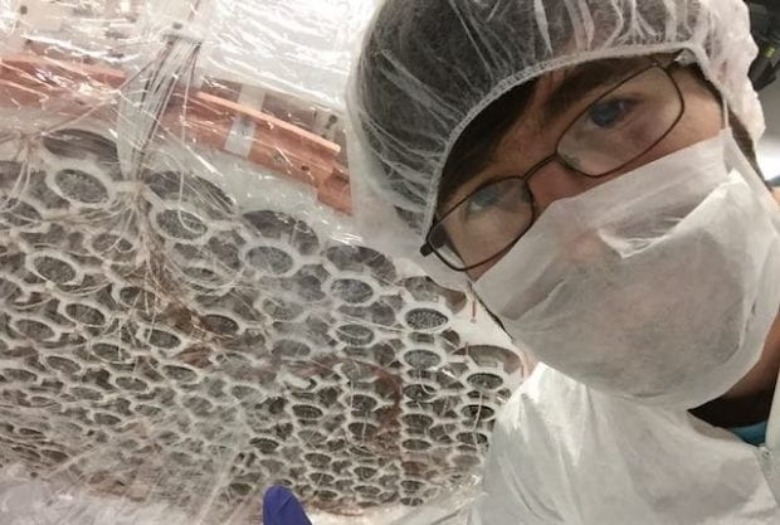 Rice University computational astroparticle physicist Christopher Tunnell is getting help in his search for the nature of the universe through a National Science Foundation (NSF) CAREER Award.

The five-year grant is awarded each year to fewer than 400 early career scientists and engineers expected to make significant impacts in their fields of study. The award to Tunnell is for $400,000.

Tunnell, an assistant professor of physics and astronomy and of computer science, joined Rice in 2018 and has drawn international attention for his participation in the search for dark matter. He is a principal investigator on the XENON1T (soon to be the XENONnT) project, which operates an ultrasensitive instrument under a mountain in Italy to capture traces of elemental particles that fly to, and sometimes through, Earth.

The XENON detectors are able to pick up faint evidence of cosmic travelers whether they involve dark matter or not. Among them are interactions with neutrinos that have magnetic moments, a topic of Tunnell’s current work.

Two years ago, the instrument caught evidence of the radioactive decay of xenon 124 showing the element has a half-life longer than the age of the universe. Last year, it may have turned up hints of another long-sought cosmic particle, axions, hypothetical particles thought to originate in the sun. That discovery triggered a flurry of hundreds of theoretical papers trying to explain the observations.

“There are two core activities in my group: One is pure astroparticle physics, building dark matter detectors,” Tunnell said. “That’s sort of our day job. The other is data science and machine learning research and development. The goal of our CAREER proposal is to link these two activities to apply our data science R&D to hard physics problems.

“In this case, part of it is called neutrino-less double-beta decay, a hard measurement that is very interesting to physicists and beyond,” he said. An earlier $1 million NSF grant helped develop the methods that will be used by the new study to reveal the nature of neutrino mass.

All that support will help Tunnell find people with the unique combination of talents required by his lab. “There’s a deficit of people like me in physics who are just as interested in computational science research as the physics and can do both,” he said. “So I’m always looking for postdocs and students I can train, and the educational part of the CAREER Award will help address this.”

Tunnell is grateful the panel of physicists who chose him for the award appreciate his data science chops. “It's good to know the research ideas we're pitching are not only interesting on the on the data science, machine-learning side, but that they're just good physics projects, period,” he said.

Read the abstract at https://www.nsf.gov/awardsearch/showAward?AWD_ID=2046549&HistoricalAwards=false

Elemental old-timer makes the universe look like a toddler: http://news.rice.edu/2019/04/24/elemental-old-timer-makes-the-universe-look-like-a-toddler-2/

Department of Physics and Astronomy: https://physics.rice.edu

Rice particle physicist and computer scientist Christopher Tunnell at the XENON1T experiment in Italy. Tunnell has won a National Science Foundation CAREER Award for early career scientists and engineers to advance his search for dark matter and other phenomena. (Credit: Courtesy of Christopher Tunnell/Rice University)