Brain drain could give patients peace of mind 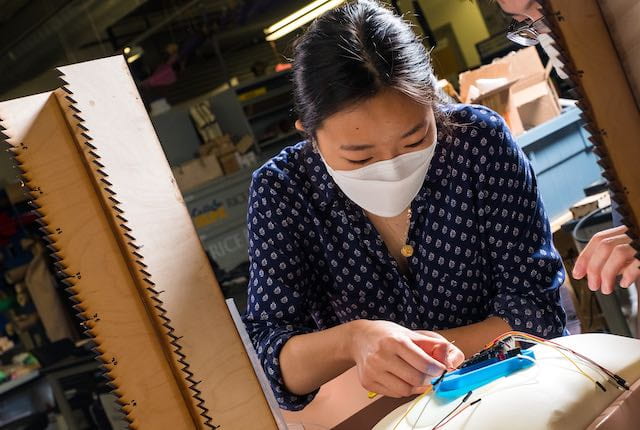 Pressure from excess cerebrospinal fluid on the brain is often relieved by surgically installing a shunt that carries the fluid to a reservoir. But when pressure in the reservoir itself is too high, the shunt needs a little help.

Seniors at Rice University’s Brown School of Engineering are working on a solution: an implantable shunt pump that senses elevated intracranial pressures and pulls fluid away from the brains of patients with normal pressure hydrocephalus or idiopathic intracranial hypertension, even when reservoir pressures are high.

The “Brain Drain” team designed a negative-pressure pump system that gently lowers pressure when necessary, pulling fluid toward a reservoir in the peritoneal cavity, pleural cavity or the right atrium of the heart.

“It seemed like the project with the most unmet need, and one that we could approach with a year’s worth of work,” said team member Cooper Lueck. “And it seemed like something that could do a lot of good for people who really need it.”

Rice University bioengineering student Irene Kwon works on the prototype of a negative-pressure shunt pump designed to help regulate excess fluid in the brains of patients with hydrocephalus and idiopathic intracranial hypertension. Photo by Jeff Fitlow[/caption]

The team based at Rice’s Oshman Engineering Design Kitchen will demonstrate its work during this year’s Engineering Design Showcase, an annual event with cash prizes for winners in a variety of categories. The showcase will be virtual this year, beginning at 4:30 p.m. April 29.

The system will provide data via a pair of sensors, Bi said. “One will be intracranial, and it will communicate with another sensor that measures the pressure in the peritoneum,” he said.

“We toyed with the idea of having them be separate (unwired) units for ease of transmission, but we found the power consumption of any sort of measurement device as well as Bluetooth in the head was too great to justify it,” Lueck said.

“So we’re running a set of wires parallel to the cerebrospinal fluid tubing to a device that is just underneath the skin right behind the ear,” he said. “That will link up to the brain catheter to measure the pressure.”

The battery-operated piezoelectric membrane pump can be wirelessly charged via an electromagnetic field and will communicate with external devices via Bluetooth.

The pump configuration is key, Brehm said. “We were going to design something custom, but then we found a really cool micropump that was membrane-based,” he said. “We wanted it to be super low power and be able to generate enough of a negative pressure differential, as well as to allow cerebrospinal fluid to flow through while it was powered off.

“Certain pump designs have rollers that impede the path of the fluid when you turn them off, but we wanted it to act like a normal shunt even when it was off,” Brehm said. “This one flexes and pulls fluid in, and then it becomes stiff again and the fluid goes out the other valve. It works similarly to the valves and chambers of the heart.”

In their final days before graduation, the students are miniaturizing the components to fit into a smaller casing more appropriate for implantation.

COVID-19 restrictions slowed but never stopped the team. “It was somewhat difficult at first getting things organized, especially last semester,” Hashim said. “I don’t think we met in person all at the same time once. But this semester we’re mostly in Houston. Splitting the work into hardware and software teams helped a lot, along with staying on top of communications so everyone was on the same page with the components.”

“We were able to adapt to the current situation really well,” Kwon said.