Best yet to come for stellar jet researchers 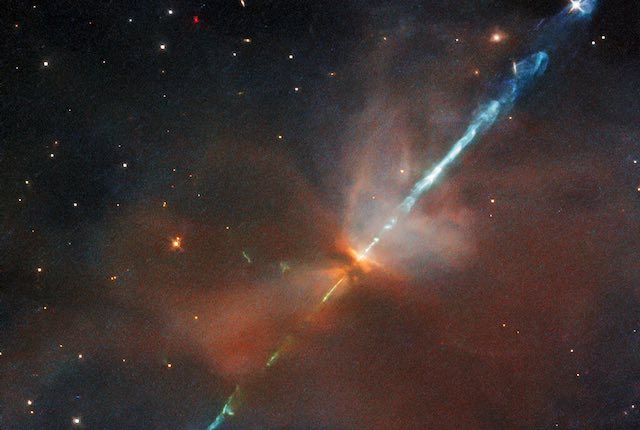 Jets of ionized gas that fly from distant, still-developing stars provide one way to judge how a next-generation instrument will advance what the Hubble Space Telescope has given to researchers over the past three decades.

A recent Astrophysical Journal study by Rice astronomer Patrick Hartigan and his international colleagues based on Hubble images of four protostars shows their jets in greater detail than previously seen, revealing more about the mechanisms behind the mysterious plumes.

Hartigan and his colleagues in Ireland, Italy and Germany analyzed images of jets captured by Hubble’s Wide Field Camera 3, installed in 2009 by a space shuttle crew that included Mike Massimino, former executive director of the Rice Space Institute. Because the jets are largely obscured by protoplanetary clouds of dust and gas surrounding the young stars, astronomers view them via their near-infrared emissions.

The Hubble images revealed details of the jets’ origins closer to their sources. The images also refined previously measured velocities of up to a few hundred kilometers per second, as well as details of counter jets on the stars’ far sides that were only hinted at by images from a decade earlier.

Surprisingly, for one target, the jet revealed interference by a hidden “low-mass stellar companion” between 20 and 30 astronomical units from the central star.

Their analysis also provides an example of how the James Webb Space Telescope, due for launch this December after a long delay, will contribute to their research for years to come. The scope’s higher sensitivity and advanced infrared capabilities will allow Hartigan and his colleagues to peer deeper into the shrouds that surround stars in the process of forming solar systems.

“Astronomers think that stellar jets play a crucial role in how stars and planets form, and our new Hubble images provide the best view so far of the regions where the youngest stars launch these flows,” said Hartigan, a professor of physics and astronomy. “We can expect even better images with the Webb Telescope, which will be able to peer through much of the dust that hides this phenomenon from view.”

A pre-publication version of the paper can be viewed on ArXiv at https://arxiv.org/pdf/2106.04414.pdf