The global thinker offers parables for a planet in crisis Sep. 13 and 14 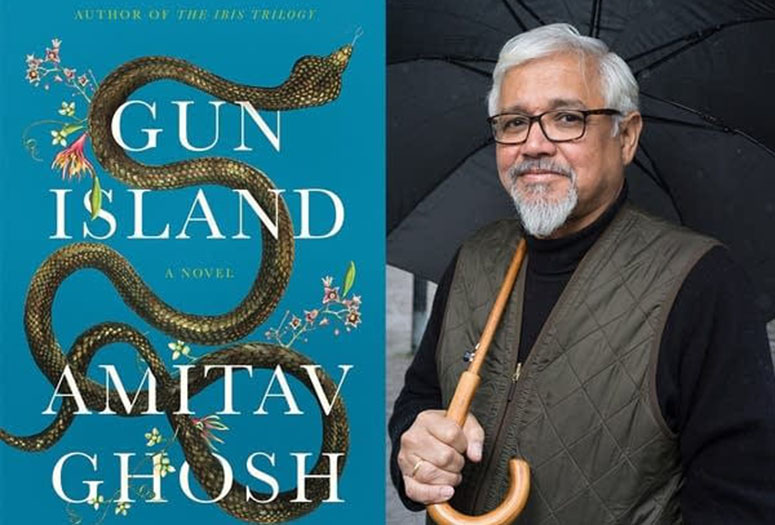 Environmental novelist Amitav Ghosh, whose fiction and non-fiction writing have distinguished him as one of India’s most renowned authors, will headline the 2021 Campbell Lecture Series sponsored by Rice’s School of Humanities.

“We are so thrilled to host Amitav Ghosh to give this year’s Campbell Lectures,” said Dean of Humanities Kathleen Canning. “His novels and essays are expressive of definitive issues in the humanities, uniquely and powerfully linking the history and practices of contemporary culture, including fiction-writing, to climate crisis.”

Ghosh will speak and take questions from the audience during two evenings of lectures open to the public beginning at 6 p.m. in Herring Hall 100. Limited seating is available for the lectures, which will also be broadcast live via Zoom. Those attending the lectures in person must wear masks and practice social distancing in accordance with the university's campus COVID policies.

“Embattled Earth: Commodities, Conflict and Climate Change” will be the subject of his Sept. 13 lecture. The Kolkata-born writer will discuss the Indian Ocean’s role as a centurieslong theater of intense imperial rivalries over commodities and resources.

“For centuries the main players in these conflicts were Western colonial powers, but over the last few decades the countries of the Indian Ocean rim have themselves become major consumers of commodities and resources,” Ghosh said. “Are the imperatives of empire and military supremacy among the major drivers of climate change? If so, why are these issues generally elided? Does the fact that the discourse on climate change is largely produced within university-based contexts have anything to do with this elision?”

The next evening, Sept. 14, Ghosh will consider the ways nonhuman consciousness figures in various narrative traditions in a lecture that asks “Can the Non-Human Speak? Other Beings in Myth, Literature and Ethnography.” It’s an absurd question on its face, Ghosh said, but it’s actually one of the essential questions in an era of accelerating climate change caused by humans.

“At this moment in time, when we look back on the history that has brought us to the point of a planetary catastrophe, we cannot but recognize that our plight is in large part a consequence of the ways in which certain classes of humans have actively muted all other beings by representing them as brutes; that is to say, creatures whose presence on Earth is solely material,” Ghosh said.

In his most recent nonfiction work, “The Great Derangement: Climate Change and the Unthinkable,” Ghosh questions why contemporary literature has largely ignored issues of global warming, ecological collapses and other climate crises. His newest book, “The Nutmeg’s Curse: Parables for a Planet in Crisis,” will be published in October. It continues the work of 2016’s “The Great Derangement,” tracing our current environmental crisis to Western colonialism and its violent exploitation of both human life and the natural world.

His much-praised “The Great Derangement,” Canning said, “makes clear the escalating crisis of climate, so evident these past months across the globe, is most profoundly one of culture and of the imagination. Amitav Ghosh’s visit should appeal to a broad spectrum of the Rice community who are engaged with study of the environment, energy, and climate change, not least our vibrant program in Environmental Studies in the School of Humanities, but also to colleagues and students who study climate change from scientific perspectives.”

Ghosh’s lecture also comes on the heels of a new 1,300-page paper from the Intergovernmental Panel on Climate Change, the sixth such report from the United Nations body of experts. The report’s damning assessment warns that — within the next decade — the planet will likely become 1.5 degrees Celsius warmer than in the late 19th century, causing dire consequences that will include increased precipitation and floods, intense droughts and wildfires, ocean acidification, sea level rise and coastal erosion. Disasters like these taking place on a massive scale are terrifying to contemplate, let alone write about, aside from the recent popularity of the newish “cli-fi” genre.

“It argues, among so many other things, that there is a particular ‘derangement’ at work in the world of contemporary literature, but also in the academy more generally, where the most urgent concerns about climate change are precisely those things that we do not write about because they are too big, or because our histories and institutions themselves are causing them, or because they operate in transnational ways that overflow and overwhelm all of our local understandings,” Kripal said.

Human beings have a hard time grappling with concepts this immense — along the lines of philosopher and Rice professor Timothy Morton’s “hyperobjects,” for example — but that’s not the only flaw in our logic when it comes to thinking more expansively about this planet and our place on it.

Ghosh also argues that there are all sorts of nonhuman agents in history, from volcanic energy and gastropods (yes, snails) to the human dead and animal spirits (as in Ghosh's novel “Gun Island”) that we don’t adequately consider.

“We imagine that everything non-human is somehow also not sufficiently sentient or even dead, or that we are the only forms of real agency and intelligence, which is clearly not the case. There is profound intelligence in and as the environment,” Kripal said. “That’s part of thinking big: no longer thinking of humans as separate, but as expressions of this larger, living, super-intelligent ecosystem.”

For more information on the Campbell Lecture Series or to register via Zoom, visit humanities.rice.edu/campbell-lecture-series/amitav-ghosh. To reserve an in-person seat for the Sep. 13 or 14 lectures, email andrew.stefl@rice.edu.