Amitav Ghosh on the dangerous delusions that created our climate crisis 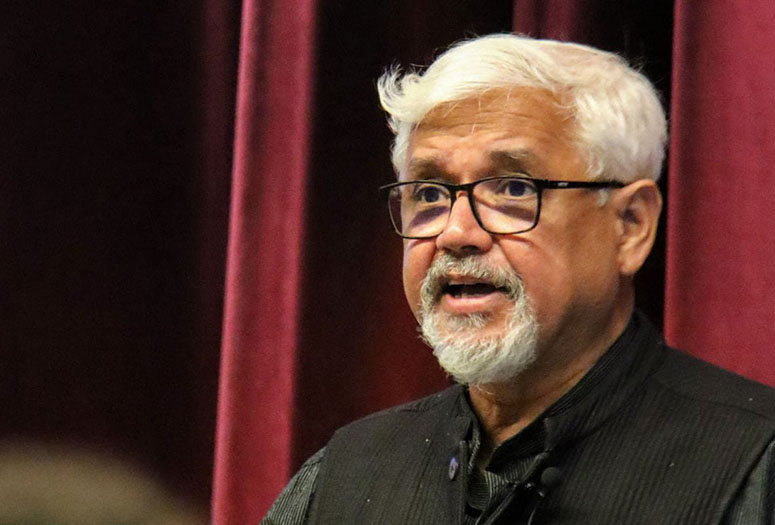 Award-winning novelist Amitav Ghosh delivered a duo of lectures describing the ways in which climate change and the exploitation of the earth’s natural resources are the result of a European colonialist mindset that turns everything it touches into a commodity and reduces to “brutes” anything that stands in its way.

Ghosh was the featured speaker over the course of two nights, Sept. 13 and 14, in this year’s Campbell Lecture Series, which was twice rescheduled due to the ongoing COVID-19 pandemic. Both Ghosh and Dean of Humanities Kathleen Canning, who introduced his lecture on its second night inside Herring Hall, noted wryly that Hurricane Nicholas nearly forced them to reschedule a third time.

“It's really a great pleasure to be here today, even if it's in rather strange circumstances,” Ghosh said. “But, as Kathleen said, I think it's in some way appropriate not to be allowed to forget the planetary crisis doesn't rest; it's all around us now.”

An audience of over 600 people, spread between those viewing the live webinars online and those listening in person, attended both nights. Questions for the writer came in fast following each lecture.

The first night, Ghosh detailed the history of the nutmeg tree and the global network of both trade and war created as the Dutch pursued the valuable spice under immense financial and geopolitical stakes.

“It has been said by none other than Rice University’s Timothy Morton that the spice race was the space race of its time,” Ghosh said.

The tree, which is also the subject of Ghosh’s forthcoming book “The Nutmeg’s Curse,” is native to the Moluccas, a tiny archipelago of Indonesian islands. There, beginning in 1621, the indigenous Bandanese population who regarded it as “the tree of life” were exterminated by Dutch traders who regarded them as savage brutes devoid of agency — and, regardless of their humanity, simply in their way. Over 15,000 people were senselessly slaughtered; any remaining Bandanese were starved or enslaved.

“The Bandanese were a proud and enterprising trading community that ceased to exist as a people; their world was brought to an end in less than 10 weeks,” Ghosh said. “The Bandanese were thus some of the earliest victims of a scourge that now threatens to engulf the entire planet.”

As we advance scientific pursuits and create new technologies, we’re tempted as 21st-century humans to believe that we’ve changed since the time of such sadistic colonial aggression — that we’re moving toward more sustainable ways of inhabiting the earth.

Yet, Ghosh warned, not only has the European empire-building mindset of amassing power and resources at all costs become entrenched among global elites, we are in fact now more dependent on the earth, its botanical matter and its fossil fuels than ever before. The wealthier you are, in fact, the more dependent you become.

The “liberatory power” of renewable energy has global implications, Ghosh said, as fossil fuels have become enmeshed with power structures across the world, from the physical choke points like the Strait of Hormuz through which coal and oil are shipped to the U.S. military oversight of this vast network.

This network generates trillions of dollars in sales, shipping, trade and transport every year. What would happen to it if our dependence on these fuels was reduced? How would Washington, D.C., respond to the decline of the petrodollar? How would oil-producing countries respond to a decline in their geopolitical power?

This network — the trap of fossil fuels, with energy as the bait — is the very foundation of Western hegemony, Ghosh said. Is the Anglosphere prepared or even willing to shrink its own geopolitical footprint? And what are the psychological implications of such a significantly altered world order?

Ghosh said he’d often heard the old joke that it’s easier to imagine the end of the world than the end of capitalism, but that the aphorism never rang true to him, because it’s simply false: a majority of the world's population did not live in capitalist societies until very recently, while even in the West the normal functioning of capitalism was suspended during both world wars.

What has never been suspended since the 16th century, however, are the dynamics of global empire — which was at the root of those wars. Yet even as these imperial powers fought each other in Europe, they would often collaborate in the colonies, assured that their European dominance would continue long into the future.

“That which is really hard to imagine,” Ghosh said, “is the end of the absolute geopolitical dominance of the West. It is precisely this prospect that now looms, adding a further dimension of uncertainty to our planetary crisis.”

In his second lecture, Ghosh explored the ways in which European colonialism has reduced anything that’s stood in the way of “progress” by creating its own Enlightenment-fueled definitions of such things as language, speech, meaning-making and communication.

As assured as imperial powers were of their future world dominance, they were perhaps even more assured that the people who inhabited their colonies were backward brutes unworthy of being treated as fellow humans. A manifestation of this attitude can be seen through the character of Caliban in William Shakespeare’s “The Tempest,” Ghosh said.

A “brute” of a man living on an island upon which his eventual enslaver, Prospero, is shipwrecked, Caliban is taught to speak Prospero’s language and the two characters develop a relationship of both dependence and animosity. The essence of Caliban’s brutishness, Shakespeare implies, lies in his initial “lack” of speech.

“This goes straight to the heart of the European colonizers’ framing of the colonized,” Ghosh said.

The colonizer renders the “brute” a mute savage by overlooking existing forms of language or culture; the same has been done to all forms of nature, from trees to volcanoes, which are assumed to not possess any greater intelligence or agency beyond instinct.

Why did European colonizers or Enlightenment-era thinkers decide other humans, other species and nature itself were mute? Incapable of free will or independent action? Because doing so conveniently transforms the other into a nonhuman resource, existing only to provide labor or food or fuel.

“Without the despoiling of the Americas, Europe would never have become more than a backyard of Eurasia, the home continent of civilizations that were much richer — no pillage of the Americas, no capitalism, no industrial revolution, thus perhaps no Anthropocene,” Ghosh said. “So we are confronted with the paradox that the invention of the human went hand in hand with the process of this disaggregation, whereby the faculties of speech and reasoning were not regarded as being distributed equally among all.”

Just as the West embarked on a reckless use of resources, the rest of the world is adopting the same colonial methods of extraction and consumption — an unsustainable pace for the earth to sustain, and one that could have been predicted long ago were we not so quick to assign humanity to some but not others.

“If this possibility had been acknowledged a century ago, then maybe some thought would have been given to the consequences,” Ghosh said. “But through the 19th and much of the 20th centuries, it was an unstated assumption amongst those who ruled the world that most non-Westerners were simply too stupid, too brutish, to make the transition to industrial civilization on a mass scale.”

Today, the question of who is fully human and who has been muted lies at the heart of our current global crisis, Ghosh said.

“At this moment in time when we look back on the trajectory that has brought us to the brink of a planetary catastrophe, we cannot but recognize that our plight is a consequence of the ways in which certain classes of humans, a very small minority in fact, have actively neutered others by representing them as brutes — creatures whose presence on Earth is solely the theory,” Ghosh said.

“It was because of these assumptions that it was taken for granted that the greater part of humanity was intellectually and culturally incapable of industrializing, and that delusion is itself an essential component of the catastrophe that is now unfolding across the planet.”

The Campbell Lecture Series is organized by the School of Humanities with generous support from the Campbell Foundation. The mission of the lecture series is to bring distinguished scholars in the arts, literature and humanities to Rice to discuss their career and work while supporting engagement between scholar and student.