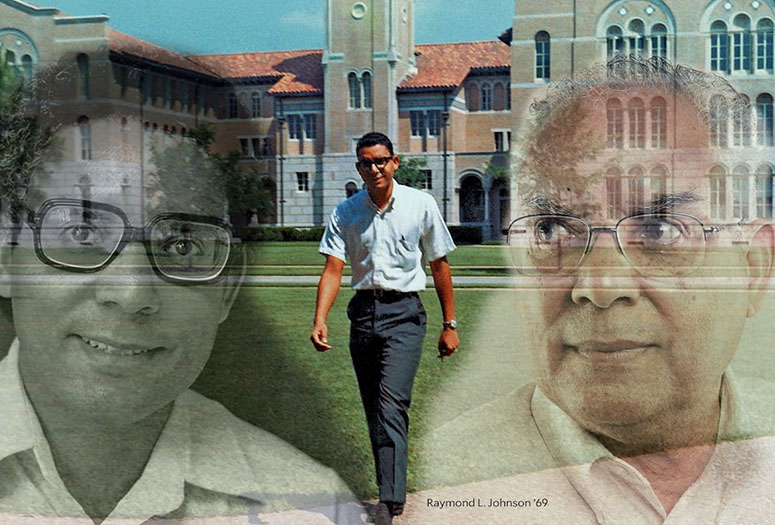 Raymond Johnson came to Rice in 1963 as the university’s first Black student, pursuing his doctorate in mathematics.

Johnson’s discussion was the third “Black at Rice” webinar convened by the Task Force this semester to offer dialogue on the Black student experience. It was one of many online events held by the Task Force in its efforts to promote frank and honest discussion of Rice’s relationship with slavery, segregation and racial injustice.

After graduating with his Ph.D. in 1969, Johnson went on to teach at the University of Maryland and later became the mathematics department chair. Over his 40-year career there, he developed a national reputation for mentoring graduate students and was awarded the Presidential Award for Excellence in Science, Mathematics and Engineering Mentoring in 2012.

As a mentor, Johnson was passionate about helping students from underrepresented minority groups pursue advanced degrees. In some ways, Johnson was paying forward the encouragement he received from his own adviser at Rice: Jim Douglas Jr., the W.L. Moody Jr. Professor of Mathematics at the time. It was a title Johnson shared when he returned to Rice in 2009 as the W.L. Moody Jr. Visiting Professor of Mathematics.

Among the wide-ranging topics discussed on the Zoom conversation were

Johnson’s relationship to Rice, his memories of the lawsuit that sought to bar Black students entry to the university and his thoughts on how graduate programs can more successfully guide and mentor minority students.

The discussion was moderated by history professor Alexander Byrd ’90, co-chair of the Task Force and the Vice Provost for Diversity, Equity and Inclusion, and Akilah Mance ’05, general counsel for the Houston Forensic Science Center who also serves on the Task Force’s steering committee.