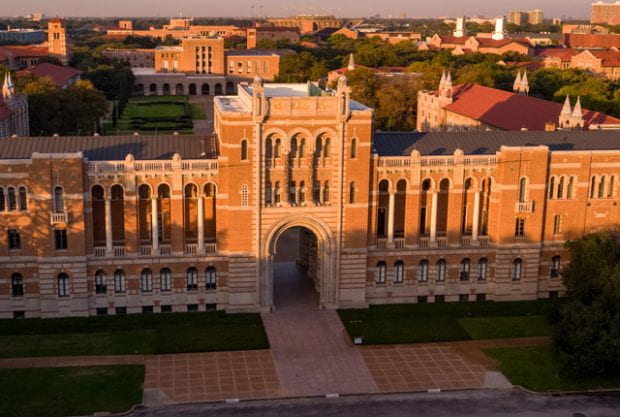 Wrapping up a year unlike any other in Rice’s history, President David Leebron delivered his 2020 State of the University address with an opening salute to the university’s faculty, staff and students for overcoming the year’s unprecedented challenges.

“What I mostly want to begin with is how proud I am of Rice and our Rice community,” Leebron said. “All of you — faculty, staff, students — have pulled together and risen to the challenge of the pandemic and engaged in the conduct — test taking, mask wearing, social distancing — to the degree necessary to keep our community safe.”

Leebron, who delivered the Dec. 9 address virtually from his office, reviewed not only how Rice has responded to the COVID-19 pandemic and confronted racial injustice in 2020, but also how the university continues to build its reputation and advance its mission while navigating the logistical and financial complications of a unique year.

“This has been a remarkable performance by our university,” he said.

Among the key elements of Rice’s success during the pandemic, Leebron said, were the university’s policies on mask wearing, comprehensive testing, contact tracing, quarantining and imposing limits on campus gatherings. Out of more than 74,000 COVID-19 tests conducted on campus only 112 turned out positive, he said, giving the campus an “extremely low” positivity rate of 0.15%. Nonetheless, he noted that the virus had a tragic impact on the Rice community when it claimed the life of Margarita Rodriguez, a custodian who worked at the Shepherd School of Music for 40 years.

As the virus spread, the university rapidly converted to remote learning last spring, then in the fall adapted to a hybrid mix of online and classroom instruction. Leebron cited survey data indicating 78% of faculty were satisfied with teaching only online and 58% were satisfied with dual delivery, compared with 25% who were dissatisfied. An overwhelming 90% of faculty said they had the resources they need to teach dual-delivery courses successfully, and 92% said they had such resources for online-only courses. Leebron thanked the Office of Information Technology for its outstanding support.

“And I want to give a special shout-out to the Office of International Students and Scholars. Our international students really faced difficult and challenging circumstances,” Leebron said. “They would not have been able to succeed without the support of that office.”

In a year in which the nation grew more acutely aware of racial inequity and social injustice, Leebron outlined a series of additional efforts the university has undertaken to confront the issue in the Rice community. Alex Byrd assumed the newly created position of vice provost for diversity, equity and inclusion. The new post will create a single point of responsibility for all efforts to promote inclusion, Leebron said. Byrd will coordinate the visioning and design input of a new multicultural center to be located in the new student center being designed by Adjaye Associates.

“The Task Force on Slavery, Segregation and Racial Injustice was established just about a year and a half ago under the great leadership of Alex Byrd and Caleb McDaniel,” Leebron said. “The Center for African and African American Studies was launched under the leadership of Tony Pinn. Jenifer Bratter launched BRIDGE (Building Research on Inequality and Diversity to Grow Equity). These efforts now have to form a fundamental part of who we are as a university.”

“As you can see, we’re a dramatically different university than we were 15 or so years ago, which isn’t to say that more progress can’t be made,” Leebron said.

He also presented data indicating the university needs greater diversity in its doctoral programs: Measured by the percentage of doctoral degrees awarded to underrepresented minorities, Rice ranks somewhere near the middle of its peer institutions. Meanwhile, despite recent strides in recruiting more minority faculty members, more than 70% of Rice’s faculty is white.

“In recent years, we have made significant progress, and yet still we could hardly claim to have a representative population among our faculty,” Leebron said, emphasizing the need to make more concerted efforts to build a diverse faculty and student body.

Rice’s faculty continues to win recognition with prestigious appointments and awards, Leebron said, highlighted this year by the Pulitzer Prize presented to Caleb McDaniel for his acclaimed book “Sweet Taste of Liberty.”

Meanwhile, Leebron said, the university continues making progress on its V2C2 goal of elevating its research achievement and reputation. The Welch Foundation has committed $100 million to The Welch Institute for Advanced Metals, dedicated to the goal of designing new materials that could revolutionize a wide range of industries. The university has partnered with the Army Futures Command and the Army Research Laboratory for the Rice National Security Research Accelerator, which represents a new model for collaborative research working on mission-critical technologies. And Rice has invested $50 million to launch a new neuroengineering program, an initiative that includes 26 researchers including scientists from the University of Texas Health Science Center at Houston and Baylor College of Medicine.

Leebron also pointed out that research awards to the university rose 24.5% over a single year (as of Oct. 31), Rice has funded $500,000 of COVID-19 research proposals and Rice 360˚ has developed a low-cost COVID-19 test that could be used in low-resource countries.

The president outlined a series of renovations and new building projects that have already been completed, including the Brockman Hall for Opera, the Kraft Hall for Social Sciences and the renovation of the MD Anderson Biological Laboratory. Still to come, he said, are Sarofim Hall for Visual and Dramatic Arts and a new engineering and science building, as well as renovations of McNair Hall, Maxfield Hall and Dell Butcher Hall, among others.

“Almost every school, shortly, will have benefited from some aspect of our investment in our infrastructure and facilities,” he said.

The COVID-19 pandemic cost the university an estimated $18.3 million in public health expenses during the 2021 fiscal year, Leebron said, and revenues from housing and dining fell between $12 million and $13 million. But he said the main financial issue the university faces involves endowment returns.

“The key problem we face is the loss of 0.7% on the final returns of the endowment (for fiscal year 2020),” he explained. “That might not sound like very much, but the real comparison figure is the 7.5% return assumption that we had in planning our financial future. That means the difference between the actual return and what we initially planned on is somewhere above 8%. And so, on an endowment over $6 billion, that’s somewhere around $500 million. And that translates, ultimately, into about $25 million difference per year.”

As a result, he said, the university has begun rethinking parts of its budget, closing the gap by taking specific actions like delaying the dates when new hires become eligible for benefits.

“We’re looking at, for next year, a 3% budget reduction across our campus,” he said. “We may need the same in FY '23, but it will depend a lot on where the markets are and where our endowment is. And right now, the news on both of those are pretty good.”

The academic calendar has been altered for the spring semester, which begins Jan. 25. Undergraduates will move into residential colleges on a staggered schedule, Leebron said, and the spring break has been eliminated in favor of a number of single holidays sprinkled throughout the semester. Meanwhile, maximum class sizes have been raised from 25 to 40.

“We’re in the business of creating opportunity, of changing lives and possibilities for our students, our faculty and staff and acting proactively too assure that all are able to seize those opportunities,” Leebron said. “And as a university, particularly as a research university, we want to impact the world around us through education and research and contribute to better lives, not only in our community, but all around us — whether here in Houston or across the globe. And we should take pride in that, and go forward with optimism about what we can achieve.”

“What we’ve seen over the past nine months . . . is the ability of our university to move ahead, to strike new ground, to set new records in terms of applications and research funding,” Leebron said. “So the story for our university as we face this pandemic is really a story of success during the pandemic. We’ve kept our campus safe. We’ve achieved new heights. And we’re optimistic about what we can do in the years ahead.”