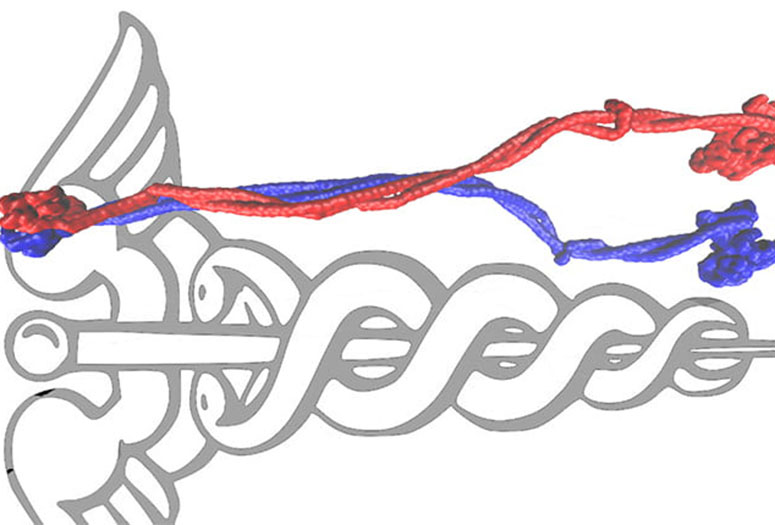 HOUSTON – (Jan. 2, 2020) – It turns out the coiled snakes often used to symbolize medical knowledge are more than apt. They also mimic a key to life itself.

Members of Rice's Center for Theoretical Biological Physics (CTBP) are taking a deep dive into the dynamics of essential proteins that help DNA fold into its compact, functional form in chromosomes. They found a key protein’s “coiled coils” also braid around each other and writhe like snakes as they form bigger loops in the DNA.

The loops, in turn, bring together sites on DNA that regulate the transcription of genetic messages. While the loops and their functions are becoming better understood, until now nobody has been able to take a close look at the condensin and cohesin proteins that wrangle the DNA into shape.

The Rice team led by physicists José Onuchic and Peter Wolynes and postdoctoral fellow Dana Krepel report in the Proceedings of the National Academy of Sciences that structural maintenance of chromosomes (SMC) proteins may actively manage DNA through a novel mechanism.

They found these proteins have ring-shaped lassos that consist of two 35-nanometer long protein coiled coils. These terminate on one end in a pair of “head unit” motors that bind to DNA coils, and on the other in “hinges” thought to open and close to entrap the strands.

The lab’s simulations showed these coiled coils are anything but limp lariats.

“We already knew the coiled coils have some sort of structural importance, but what we saw is that these long coils are quite active,” Krepel said. “We’re still investigating to what extent, but as we ran the simulations, we saw that the coils want to come together, kind of like headphones that get all twisted when you put them in your bag. We saw the twist right away.”

“Braiding is the word we use,” Wolynes added. “People thought the coiled coils were simply hanging out, but they didn’t think they’d coil again on top of each other in an organized fashion.

“One of the key ideas of DNA physics is that DNA operates by changing its degree of coiling and its topology,” he said. “Well, braiding is a topological feature. We think we see that the topology of the protein can interact with the topology of the DNA much as threads entwine with each other on a spinning wheel.”

Krepel noted the SMC proteins are positively charged, and DNA is negatively charged. “We’re looking at how these positive and negative charges potentially play together,” she said.

“It seems clear the coils would almost certainly braid themselves around the DNA using these charge patterns,” Wolynes said.

The project represents one of the largest challenges yet for the group’s modeling techniques, which in this case combined direct coupling analysis (DCA) of the co-evolution of related protein sequences and the atomic forces within the proteins that determine their form and function.

To complete the structure in which there were fewer evolutionary clues, the group used the AWSEM algorithm developed by Wolynes and colleagues to determine complete folded, functional structures from a coarse subset of atomic forces within a protein.

For this study, the team looked at condensin and cohesin structures with between 1,100 to 1,300 residues. “These are huge compared to proteins we have previously studied,” Wolynes said.

The size made it necessary to expand the tool set, Onuchic said. “An initial paper developed these tools but just for condensin in bacteria,” he said. “Utilizing the same approach of DCA combined with structure-based simulations, we are now investigating condensin and cohesin as they appear in humans.

“Using this method, we are able to predict the structures, but to understand the details of their dynamics requires real force fields,” Onuchic said. “So starting from the initially predicted structures, we ran AWSEM simulations. These simulations revealed the braiding.”

The models further suggested that the ATPase motors that bind DNA can twirl the braids.

“We’re still guessing at the details, but we think when the two motors are both twisting to extrude DNA into loops, one untwisting and the other uptwisting, the lassos could transfer twisting of the coils into twisting around the DNA,” Wolynes said. “The coils aren’t just passively hanging there. They’re much more involved in the process than we thought.”

The next step, he said, will be to test an even larger system with two strands of DNA, a more realistic representation, to see if the twisting action holds true. That effort will be part of a larger one at CTBP to extend its theories on protein folding to the much bigger problem of chromosome dynamics. The researchers pointed out this will be one of the main goals of the center’s future work.

“This molecule and how it forms loops in DNA is a big part of many projects we have going on in chromosomes,” Wolynes said. “There are quite a few diseases that arise from chromosome disorganization, and we want to have a better understanding of the mechanism of how chromosomes form.”

Rice researchers Aram Davtyan and Nicholas Schafer are co-authors of the paper. Wolynes is the D.R. Bullard-Welch Foundation Professor of Science, a professor of chemistry, of biosciences, of physics and astronomy and of materials science and nanoengineering at Rice. Onuchic is the Harry C. and Olga K. Wiess Chair of Physics, a professor of physics and astronomy, of chemistry and of biosciences. Both are co-directors of the National Science Foundation-funded CTBP.

The National Science Foundation, the Welch Foundation and the Council for Higher Education of Israel supported the research.

This illustration by Rice University scientists demonstrates that cohesin exists as an ensemble of braided structures (middle). Cohesin is a member of a family of proteins that have an important role in DNA organization, but little is known about the mechanism of DNA operation. Braiding of coiled coil regions was achieved in Rice’s computational models using both the initial ring-shaped complex (right) or by applying torque to separated protein members (left). Protein members are shown in blue and red. (Credit: Dana Krepel/Rice University)

This illustration based on computational models by Rice University scientists shows coiled coil interactions with DNA. Coiled coils are not just passive actors, but have charge patterns that match up with the DNA, where an imposed twist on the coils leads to a bending of the DNA. Rice researchers believe this appears to be the starting point for the DNA extrusion process. The cohesin protein complex and its charged patterns are shown in gray and blue, respectively. DNA is shown in red. (Credit: Dana Krepel/Rice University)

The caduceus, often depicted as a symbol of medicine. (Credit: Wikipedia)