HOUSTON – (Aug. 24, 2020) – Researchers at Rice University’s Brown School of Engineering are using data gathered before a deadly 2017 landslide in Greenland to show how deep learning may someday help predict seismic events like earthquakes and volcanic eruptions.

Seismic data collected before the massive landslide at a Greenland fjord shows the subtle signals of the impending event were there, but no human analyst could possibly have put the clues together in time to make a prediction. The resulting tsunami that devastated the village of Nuugaatsiaq killed four people and injured nine and washed 11 buildings into the sea.

De Hoop, who specializes in mathematical analysis of inverse problems and deep learning in connection with Rice’s Department of Earth, Environmental and Planetary Sciences, said advances in artificial intelligence (AI) are well-suited to independently monitor large and growing amounts of seismic data. AI has the ability to identify clusters of events and detect background noise to make connections that human experts might not recognize due to biases in their models, not to mention sheer volume, he said.

Hours before the Nuugaatsiaq event, those small signals began to appear in data collected by a nearby seismic station. The researchers analyzed data from midnight on June 17, 2017, until one minute before the slide at 11:39 p.m. that released up to 51 million cubic meters of material.

The Rice algorithm revealed weak but repetitive rumblings -- undetectable in raw seismic records -- that began about nine hours before the event and accelerated over time, leading to the landslide.

“There was a precursor paper to this one by our co-author, Piero Poli at Grenoble, that studied the event without AI,” de Hoop said. “They discovered something in the data they thought we should look at, and because the area is isolated from a lot of other noise and tectonic activity, it was the purest data we could work with to try our ideas.”

De Hoop is continuing to test the algorithm to analyze volcanic activity in Costa Rica and is also involved with NASA’s InSight lander, which delivered a seismic detector to the surface of Mars nearly two years ago.

Constant monitoring that delivers such warnings in real time will save lives, de Hoop said.

“People ask me if this study is significant -- and yes, it is a major step forward -- and then if we can predict earthquakes. We’re not quite ready to do that, but this direction is, I think, one of the most promising at the moment.”

When de Hoop joined Rice five years ago, he brought expertise in solving inverse problems that involve working backwards from data to find a cause. Baraniuk is a leading expert in machine learning and compressive sensing, which help extract useful data from sparse samples. Together, they’re a formidable team.

"The most exciting thing about this work is not the current result, but the fact that the approach represents a new research direction for machine learning as applied to geophysics,” Baraniuk said.

“I come from the mathematics of deep learning and Rich comes from signal processing, which are at opposite ends of the discipline,” de Hoop said. “But here we meet in the middle. And now we have a tremendous opportunity for Rice to build upon its expertise as a hub for seismologists to gather and put these pieces together. There’s just so much data now that it’s becoming impossible to handle any other way.”

De Hoop is helping to grow Rice’s reputation for seismic expertise with the Simons Foundation Math+X Symposia, which have already featured events on space exploration and mitigating natural hazards like volcanoes and earthquakes. A third event, dates to be announced, will study deep learning applications for solar giants and exoplanets.

Michel Campillo, a professor at Grenoble, is co-author of the paper. Poli is a researcher at the French National Center for Scientific Research, Grenoble. De Hoop is the Simons Chair in Computational and Applied Mathematics and Earth Science and holds appointments in computational and applied mathematics, mathematics and Earth, environmental and planetary sciences at Rice. Baraniuk is the Victor E. Cameron Professor of Electrical and Computer Engineering and Computer Science at Rice and founder and director of OpenStax.

Creep and slip: Seismic precursors to the Nuugaatsiaq landslide: https://agupubs.onlinelibrary.wiley.com/doi/full/10.1002/2017GL075039

An overview by the U.S. Geological Survey shows the location of the Nuugaatsiaq landslide (yellow star) relative to five broadband seismic stations (pink triangles) within 500 km of the landslide. Nuugaatsiaq (NUUG) was impacted by the resulting tsunami the reached a height of 300 feet at sea, though it was much lower before it reached the village. The inset shows the geometry of the fjords relative to the landslide and Nuugaatsiaq. (Source: USGS)

A graph extracted by a novel Rice University algorithm shows waveforms from the cluster associated with precursors and aligned with respect to a reference waveform within the cluster. The data was from three seismograms collected over the course of the day before the Nuugaatsiaq landslide. (Source: Nature Communications) 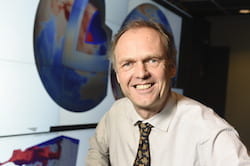